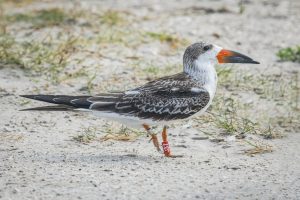 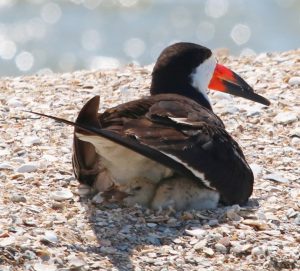 The Black Skimmer is an iconic bird known to fishermen and beach goers along the Gulf coast for its black and white plumage, orange and black bill and ability to skim the water surface searching for prey. Their hunting technique is aided by their bill in which the lower mandible is longer than the upper. While skimming they extend the lower mandible below the water surface. When the bill detects a fish, it snaps shut capturing the prey. Skimmers are one of our colonial waterbirds meaning they nest in large colonies with hundreds of pairs occupying a small space. In Texas they nest mainly on bay islands though there are a few mainland colonies. They are sensitive to environmental and human disturbance and therefore are a good indicator species for overall bay health and water quality.

Sadly, the number of nesting pairs of Black Skimmers in Texas has declined by 70% over the last 40 years. Similar declines have been documented in other areas. We don’t know the cause of the decline but we suspect human disturbance during the nesting season is a large factor. There are other issues that need to be teased out of the complex set of environmental factors that could be impacting the species as a whole, however.  The decline could be also be related to food shortages or environmental contaminants or other as yet undocumented factors.

As part of our Beach Nesting Birds project we have been monitoring the Black Skimmer colony at Dow Chemical Plant A in Freeport since 2014. Black Skimmers were first reported nesting in a shell parking lot at Dow in 1961. Concerned employees cordoned off the section of parking lot chosen by the skimmers and from that effort, the Dow skimmer colony now consists of an enclosed area that is three acres in size with a substrate consisting of crushed oyster shell and crushed limestone. The skimmer lot is enclosed in a 42-inch-high chain link fence which incorporates a livestock electric fence wire to exclude mammalian predators. Dow also added two shallow water flumes to provide sources of water for grooming, wetting brood patches, and freshwater for the chicks. Each spring GCBO monitors the progress of the birds with support from Dow volunteer escorts.

In 2018, GCBO began monitoring natural island colonies in West Galveston and East Matagorda Bay and banding chicks to assess their survival and movements. We visit the colonies once a week and count the number of adults, nests, and chicks from a boat using video cameras and photographs to verify our counts. This enables us to determine how many chicks fledge and also document colony abandonment and failure and attempt to determine the causes of disturbance.