Cuba is the largest island in the Caribbean and is both a major stopover area and winter home for hundreds of North American migratory bird species. At least 280 species of migratory birds, that breed in North America, stopover or winter in Cuba. In addition to supporting migratory birds, Cuba’s native species are also important and many are unique. There are at least 22 endemic bird species. While, overall we have a general idea of the birds that occur in Cuba at present, there are still many areas of the country that have not been studied in detail. Some intensive research efforts conducted over the last decade in several localities throughout the country have all provided new insights as to the presence and distribution of many bird species both resident and migratory. There are significant benefits that can be obtained by conducting more detailed surveys to document distribution, abundance and phenology of birds in some areas of Cuba that have not been adequately surveyed. In addition, because of Cuba’s unique position as a stepping stone between North America and Central and South America, there may be locations that could serve to monitor trends in populations over time. This would require that repeated yearly surveys be conducted following the same protocol at the same location over time. 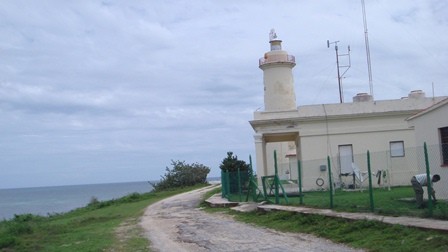 The westernmost point in Cuba, one of the hawk watch sites

The Biosphere Reserve Peninsula de Guanahacabibes, a GCBO Site Partner, was established in 1987. The Peninsula of Guanahacabibes, in the province of Pinar del Rio, forms the western most tip of Cuba and the reserve occupies approximately 87% of the peninsula with 101,500 hectares. It is a diverse region with many species including 665 plants, 140 birds, 35 reptiles, 18 mammals, and 16 amphibians. Several endemic plant species are present including 205 Cuban endemic and 15 species endemic only to the reserve. It supports five of the eight Cuban endemic Genus of birds and nine of the 22 species. There are two herptile species and seven subspecies that are found only in the reserve. Because of its geographic location, south of the Florida Keys and east of the Yucatan Peninsula, the Peninsula de Guanahacabibes is a major stopover site for migratory birds travelling between North and Central and South America. It may be a pivotal location for birds moving to and from the Yucatan Peninsula as well. Twenty-three species of North American warblers have been recorded in the peninsula for example. Several other wading bird species of interest or conservation concern are known to migrate via, or to, Cuba but little specific information is available regarding migration corridors and /or wintering sites for species such as Great White Heron, Wood Stork, Reddish Egret and Roseate Spoonbill.

A raptor species of interest in North America is the Swallow-tailed Kite (STKI) where population estimates and trends have been difficult to estimate but whose range has shrunk significantly in the last few decades. It appears that STKI breeding in the southeastern US will migrate south via Florida and the Caribbean to Central and South America. Another portion of breeding STKI travels south via Texas and the Mexican states of the Gulf coast and are detected and counted in several locations that conduct hawk watches. However, those that migrate via Florida are not counted in any hawk watch so no formal estimates exist of their population trends. STKI have been observed in Cuba during the migration and wintering period but as of yet have not been adequately surveyed. One limited fall count of raptors detected almost 3,000 STKI which represents between 60% and 92% of the different estimates for the North American population. Currently there is no formal migration count or survey being conducted anywhere in the country. Several other raptors species, including Cooper’s, Swainson’s and Short-tailed Hawks have only recently been documented migrating via Cuba Project Objectives The overall goal of our project is to identify areas of importance for migratory birds along Cuba’s western coasts and support local initiatives for the study and conservation of migratory and resident birds. Local initiatives will be supported via training workshops and support to conduct field work.