What is light pollution?

For example: leaving your drive way or front porch light on for the duration of the night could be considered unnecessary, but there wouldn't be a huge impact on the night sky. But, think about the city of Houston, which has a population size of roughly 2.3 million people as of 2020 all leaving their porch lights on. The more light that is directed to the night sky can diminish the ability for one to see the stars properly at night. 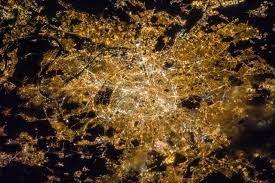 Imagine this is your view of Houston as you are flying from San Diego to Miami. While it might look beautiful out the window, upwards-directed light like this can have serious ecological effects, especially on migrating birds. 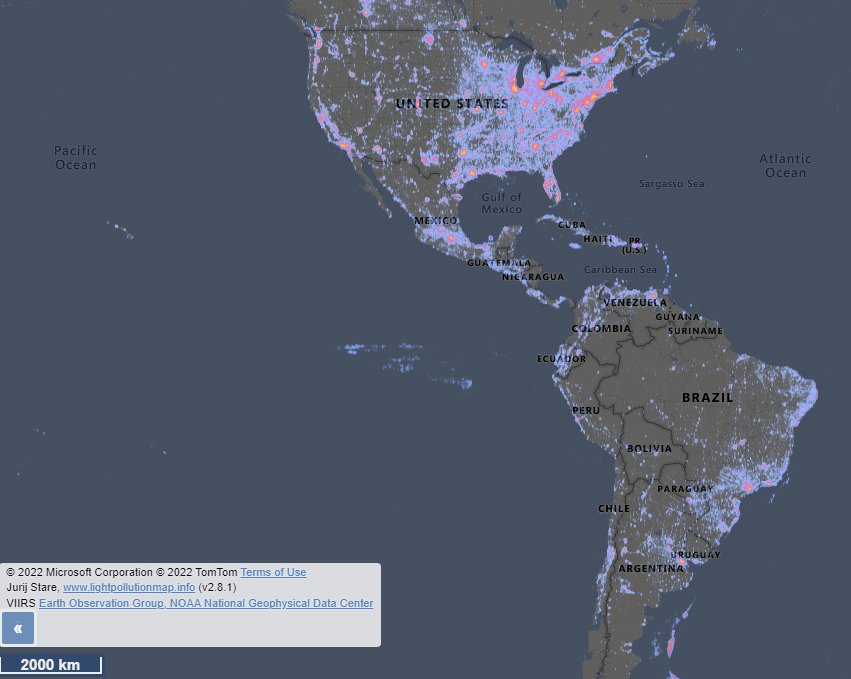 If you are lucky during the fall/winter months, you may hear the honks and see the magnificent V of migrating Canada geese heading south to warmer areas, then the same when they are returning north to breed. It is quite the spectacle to see, but one has to wonder, why do they do it? How do they know where they are going? To start, it is important to know that not all birds migrate, but a lot of species do.

For example, the Canada Goose will migrate south from Canada, or more northern areas, to the southern parts of the United States or parts of Mexico during the winter months for warmer weather and abundant food sources. The Baltimore Oriole, primarily living on the East coast, will also migrate south into Mexico or South America to look for more food sources. 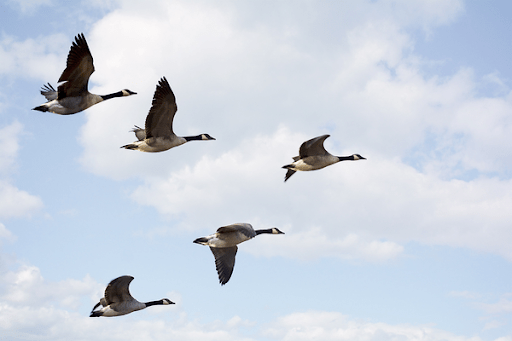 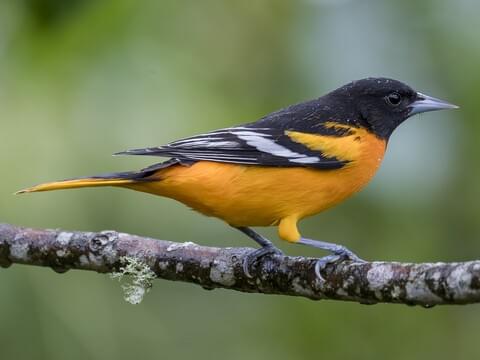 The primary motivations for migration are food and breeding grounds. In the winter, insects and other foods are more difficult to find up North, so the birds head South to more hospitable habitats. In the Spring and Summer, when it's time to breed, birds travel North again to find their breeding territories.

But how exactly do these birds migrate? How do they know where to go? This is a question that researchers are still studying and trying to understand. From what we can tell, migration is instinctual, it's not something a bird thought to do one day as a fun activity and then other birds caught on. When it is getting close to the time that a bird wants to migrate, it will undergo something called Zugunruhe, the German word for "migratory restlessness." Think of it this way: you've been told to sit on a couch for a month and do nothing. Eventually, your leg is going to start bouncing to do ANYTHING. That's the idea behind migratory restlessness. Something within the bird is telling them "I have to migrate. I have to migrate. I have to migrate." Depicted below is a study done that visually has shown what a bird does when it undergoes Zugunruhe. The bird is feeling drawn in the direction that it wants to migrate, leaving footprints on the stamp pad in that direction. 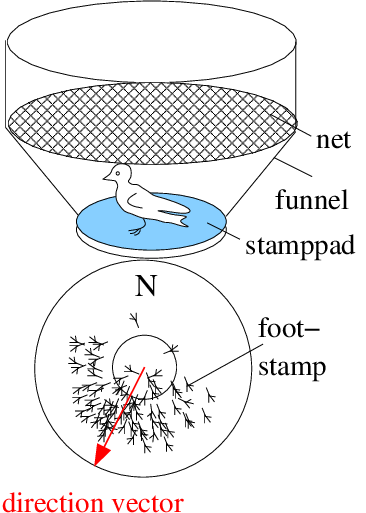 While it is not precisely known what triggers this instinct, studies have shown that changes in Earth's magnetic poles might be the best explanation. However, in certain species, changes in the day-night cycles, as well as olfactory cues, may also explain why birds migrate. It appears that each species has different cues (or a combination of them) that urge it to migrate at a certain time.

For most migratory birds, migrating at night makes more sense than migrating in the day. It's cooler out, there are fewer predators about, and it's easier to see the stars and navigate. But in our modern era, there is less and less pure dark sky to use.

Many of these migrating birds use the moon and rising sun to navigate, so when they see bright lights at night, they are drawn in. As the birds pass over bright city lights, the glow drowns out the stars. This confuses the birds and misdirects them into urban areas. This results in lost time and energy, but there is also an even greater danger.

Once lost and disoriented in the city, birds can hit buildings directly or circle them until they collapse from exhaustion. As discussed in our Injured or Sick Birds page, these collisions can often leave the birds seriously injured or dead.

Another issue related to light pollution is migratory habitat loss. When birds are migrating, they usually don't make the trip from X to Y in one day. Often, this is a process that takes days or weeks. Given that, a bird will need to stop every now and then and regather strength, both from food and sleep. Imagine this though: you are a migrating bird and stop in the same spots, roughly, every time you migrate. But all of a sudden, the areas change. There are now many bright lights, buildings, paved parking lots or monocultures here and you can't find the same food you were used to eating.

What do you do? Soldier on or stop? Unfortunately, many birds are forced to move on, pushing them past their limits, and some don't survive. Because of the continued use of nighttime lights, we are forcing birds to go farther for food and rest, and even altering a bird's migration course to a completely new route, where food resources, resting spots, and predators are unknown.

In addition to altering migration paths, continued light pollution may alter a bird's natural processes. For example, an American Robin might start its singing and hunting in the early morning due to daytime light cues. If light pollution persists, the robin may start its singing and hunting during the night, where its prey may not be found yet and new predators can be alerted. The robin wastes valuable energy hunting to no avail, making it less likely to survive.

Light pollution from one porch light might not seem like a bid deal, but it's becoming a huge issue for our avian friends. We want to see the continued existence of birds, which is why we implore you to do your part, do some research, and turn off any unnecessary lights at night. 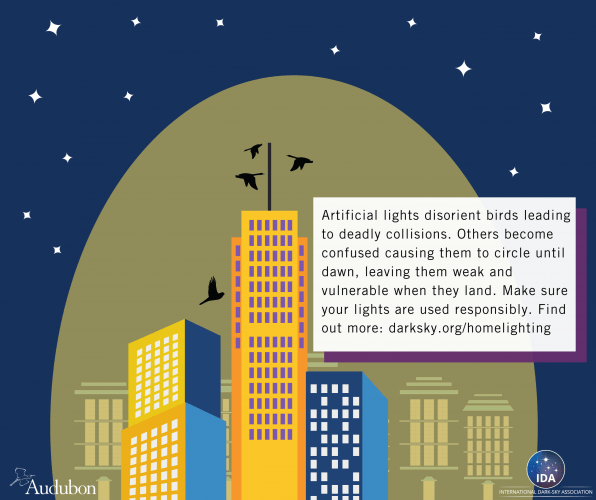 Solving the light pollution issue should be as simple as turning off a light, and hey, that's the goal! Turning off porch lights, putting a cover over outside lamps, using less intense light bulbs are all great ways to help reduce light pollution.

Turning off or limiting excess lights, both indoors and outdoors, can greatly reduce your light pollution. Solutions include turning off your lights manually, having motion-sensor lighting (so you only have it when you need it), and closing your blinds so that your indoor light doesn't seep outdoors.

To aide the birds that use your yard as habitat, keep your pets indoors at night. Cats have famously good nighttime vision and can easily catch the birds resting in your trees. You can help birds avoid window collisions (particularly if you live in a tall building in a city) by placing window decals or shades on your windows.

If you have outdoor lights that you can't turn off, consider this: Downward facing lights provide more light for less energy. Installing a downward facing light or streetlamp greatly decreases your light pollution, when compared to a light that shines upward.