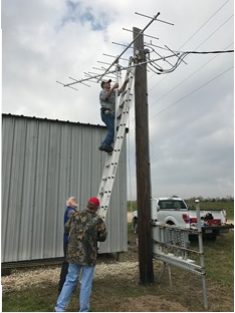 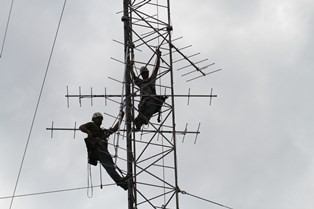 The Gulf Coast Bird Observatory and the Texas Mid-Coast National Wildlife Refuge Complex have teamed up to establish a Coastal Motus Tower Network for Western Gulf Avian Resource Assessment. The Motus Wildlife Tracking System is a Bird Studies Canada project in which passive towers are installed that can pick up signals from tiny transmitters placed on animals. Prior to our project, there were six towers installed in Texas which picked up signals from a Swainson’s Thrush and a Canada Warbler, both banded in Colombia, and Sanderling banded in Nunavut, Canada as they migrated through our area. Nearly 100 organizations are collaborating on this network and tags have been applied to 60 species of birds, as well as eight species of bats. Because the Texas coast is a major migration corridor in both spring and fall, this network has the potential to monitor thousands of birds as they move through our environment and has tremendous potential to fill gaps in our knowledge concerning bird movements.

Working in conjunction with biologists from the Texas Mid-Coast National Wildlife Refuge, GCBO will establish 15 additional towers on the Texas coast from High Island south to Rockport. Towers will be hosted through agreements with a variety of organizations and individual’s homes to create a virtual radio telemetry fence along the coast that any migrating bird will fly through on its way north or south. We are excited about the prospect of learning so much about the birds that use our coast in their annual migrations. 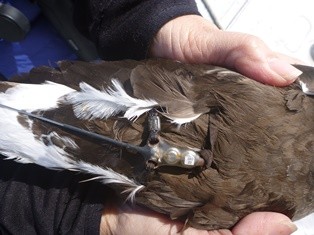 Additionally, we will be deploying tags on American Oystercatchers so we can learn more about their movements on the Texas coast. Oystercatcher chicks leave their parents at four to five months of age but are not old enough to breed until they are at least three years of age. We know very little about how they use the Texas coast during the time period they are on their own before they begin breeding. This is critical conservation information because if the chicks do not survive to breed, then we have not achieved our goal of maintaining oystercatcher populations on the Texas coast.

For more information about the project or to get involved, please contact Susan Heath.