The protection of critical bottomland habitats has become a conservation priority throughout the eastern US states. Bottomland hardwood forests and associated habitats occur in significant amounts along the floodplains of the rivers and bayous of four coastal counties west of the eastern forest section of Texas. Historically, these seasonally flooded forests were contiguous along the river and bayou corridors, but they are now fragmented by human activities. 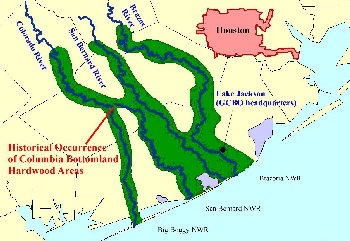 The 4 county area (Brazoria, Fort Bend, Matagorda and Wharton) is a significant stopover destination and staging area for millions of birds during their migration across the Gulf of Mexico (unpublished research data from radar imagery by Dr. Sidney Gauthreaux). Neotropical migratory birds annually migrate in the spring from Central America, South America, and Caribbean Islands across the Gulf of Mexico bound for northerly nesting areas.

Dr. Gauthreaux’s work shows us that these bottomland forests are important resting and refueling habitat for these birds. Initial investigations of the importance of these habitats found that 237 species of birds totaling 239 million individuals migrate through the area annually. The area is also an important habitat for resident breeding birds and other wildlife species.

The loss of forest habitats has caused concern for neotropical migrant landbirds that utilize the area. Fortunately for the masses of migrating birds, the US Fish and Wildlife Service is working to encourage and assist conservation of this bottomland habitat with a plan to create Austin’s Woods Units of the Texas Mid-Coast National Wildlife Refuge Complex.

Under a contract with the US Fish and Wildlife Service, Texas Parks and Wildlife Department, and Texas A&M University, the GCBO recently completed a study examining the amount of change in bottomland habitats between 1979 and 1995 in the 4 county area of the proposed Texas Mid-Coast National Wildlife Refuge Complex.

Dr. James Webb of Texas A&M completed the mapping and geographic information system work. Findings indicate that over the 16-year time period (1979-1995), there was a loss of approximately 51,000 acres or 16.9 percent.