Another field week has passed and there’s lots to tell. We had a massive thunderstorm pass through our area on the evening of Friday, April 17 complete with 70 mph winds and hail. I watched the radar and it appeared to have gone right over West Galveston Bay so I was fearful for the oystercatchers trying to protect their eggs and nests. It appears the worst of it missed the east end of West Galveston Bay though as everything was fine when we went out on Monday (20th) to check. My friends Jennifer Wilson and Woody Woodrow found several birds (Reddish Egret, American White Pelican, and Sanderling) that were injured by the storm by San Luis Pass though and took them to a rehabber. Jennifer received reports of dead Laughing Gulls all along the beach in that area too. We worry about our houses and cars when hail comes but I never thought about how the birds would do. Seems it’s pretty hard on them.

On Monday, I was accompanied by Amanda Hackney from Audubon Texas and Alan Wilde my West Galveston Bay volunteer extraordinaire. It was very windy (18mph) when we started which is really too windy to be out in a boat doing much of anything but the wind was supposed to die down around noon and this day was my only option for getting out there so we went for it. We found two new confirmed nests and two other suspected nests. We couldn’t go up and check on the suspected ones because there were other birds nesting nearby and the wind was too bad anyway. Hopefully next time I’m out, the oystercatchers will be incubating and it will be obvious that there is a nest. Four nests failed for unknown reasons and three others hatched and had small chicks. The best part of the day though was that we banded four chicks from three nests. The first two nests were on South Deer. L2 & unbanded had one chick which we banded YT.Here’s a photo of YT during the banding process. 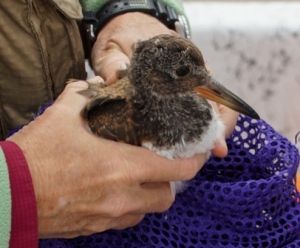 JN & JE had two chicks which we banded YU and YW. I was particularly happy to see this pair with chicks that are near fledging size because they nest where there are a lot of Laughing Gulls and until this year, they’ve never been able to fledge a chick. I think they did better this year because they started so early. Their chicks are near fledging size and the Laughing Gulls haven’t started nesting yet so they aren’t congregated as much as they will be.

The final chick was on a tiny island near Tiki Island and is the chick of J6 & P4. This nest was one of the first ones we found this year and it was the biggest chick of all four. When we pulled up to the island ready to chase it down, it flew! We thought that was it but I think it surprised itself by flying because it circled back around and landed about 10 ft from me. When it saw me go for it, it dove into the water, but having lots of experience with diving chicks, I quickly scooped it up in the dip net I had ready for action before it got away. We banded it YY. In almost every case, when we band chicks, the adults are nearby watching us and when we let the chick go, they call to it and the family is reunited. In the case of YY, the adults were there waiting and when we let the chick go they started calling to it and flew to another small island that is about 50 yards away. They kept calling and calling and finally the chick launched itself into flight and flew over to where they were! We caught that chick just in time. One more day and we’d have never gotten it. It is really satisfying to see a chick fly after you’ve watched it grow from an egg to a fuzz ball to a gangly youngster and then to a fully flighted bird. That was the highlight of my day. 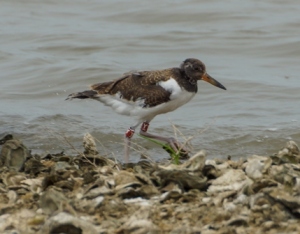 On Wednesday I went to East Matagorda Bay with Jennifer Wilson (USFWS biologist) and Julie Sullivan (TNC biologist). I was anxious to check on the chicks we banded last time and to see how the other chicks that hadn’t been banded yet were doing. When we arrived at the island where we banded two of the three chicks present last time, we found that they were not there. The whole family was on the next island over so I guess that means the chicks can fly! How exciting. Everyone was present and accounted for so three more chicks fledged. Here’s a photo of two of the fledged chicks with one of the adults.

The other two islands in that small area both had small chicks the last time we were out and when we checked on them this time, they both had two chicks. These will be fledged by the time we go out again, so we caught all of them and banded them. We had a much easier time catching these than the ones on the other island! The first two we banded AX & AY and the second two we banded CX & CW. They sure are cute little things. 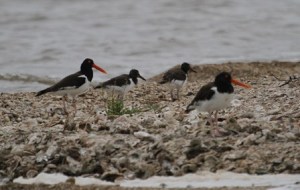 We also found that three nests had hatched and all of them had one chick toddling around after the adults. There were two other nests with just hatched chicks the last time we were out and we found that one of those pairs had one chick and the other pair had two chicks. Those will be ready for banding the next time we go out. So many chicks in East Matagorda Bay! If they all make it, it will be a banner year for chicks out there. We also found one new nest for the only pair out there that hadn’t laid one yet. It only had one egg and they weren’t incubating it yet. It is on the tiniest of all the islands out there so I hope it doesn’t get overwashed.

On Thursday, I went out to Bastrop and Drum Bays with Master Naturalist volunteer Ed Johnson and refuge biologist Jennifer Wilson. Jennifer had heard that there were dead birds being reported from this area after the hail storm and we wanted to check that out as well as see how the oystercatchers were doing. The first thing we noticed was about 15 dead Laughing Gulls on one of the islands out there. When we went up to investigate we found four dead shorebirds but I couldn’t figure out what they were. The vegetation on the island looked like it had been sheared off and it was clear the water had come up if not over the top of the island then very near the top. This island has a high peak so for the water to come up that high, the wind must have been whipping. 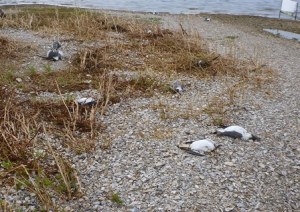 The oystercatcher nest that was there was gone too and the adults were not present. We found an injured Royal Tern so we captured it and put it in a box that Jennifer had brought just for that purpose. When we checked the other two islands out there we found all the nests were gone (three) and we found more injured birds. We captured a Tricolored Heron and a Herring Gull, both with wing injuries. There were three injured Brown Pelicans but we didn’t have anything big enough to put them in so we had to leave them there. Two of the four pairs of oystercatchers that nest there were present so we knew they were ok even if their nests were gone. We found the pair from the island with all the dead gulls roosting on an oyster reef nearby so only one pair was left unaccounted for. In Drum Bay the story was not as grim. We didn’t find any more injured birds and the large heron rookery there seemed fine but all the oystercatcher nests were gone. I imagine they were all overwashed. We only found three of the five pairs of birds that nest there but the others were likely just off feeding somewhere. I had to quit early because I was leaving town in the afternoon but Jennifer recruited some help and went back out and caught all the Brown Pelicans and took them to the rehabber. She told me that the missing pair of oystercatchers in Bastrop Bay was back on their territory when she returned to the area so now all four pairs are accounted for. The trip to Bastrop and Drum Bays was a downer way to end the week but at least there weren’t any adult fatalities. They will all nest again.

Just a reminder that we have banded chicks up for adoption now. I haven’t had time to put them up on the adoption page but if you’d like to adopt one just send me an e-mail (sheath@gcbo.org) and I’ll hook you up. Here are the options:

You can adopt an adult here.

If you just want to donate you can do that through our Just Give portal.