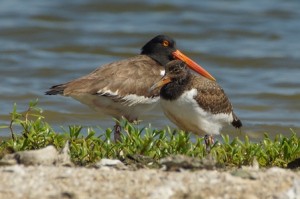 The season is winding down folks! On Monday I was joined by Alan Wilde, Tim Long, and Scott Buckel, all Galveston Bay Area Master Naturalists. We checked on everyone in West Galveston Bay and found no new nests. The tide is still pretty high from all the river run off and I think that is influencing whether the pairs that failed earlier in the season are willing to try nesting again. We usually find a few nests in June but I doubt we will this year. We saw a flock of five adults in one of the nesting territories. That would never happen when hormone levels are high so that’s an indication that the birds aren’t going to be interested in nesting anymore. Both of the chicks we banded the last time were doing fine which was a big relief. We’ve had so many banded chicks disappear this season that I was really happy these made it. We saw one of them make a short hopping flight so they are almost ready to fly. Photos by Alan Wilde.

We also saw a lot of non-breeders hanging around. Those are birds that are either too young to breed (<3 years) or those that haven’t been able to secure a territory (if they are a male) or a mate (if they are a female). There are a lot of tern chicks on the islands now. Photo by Alan Wilde.

YT the chick that was adopted by his neighbors was still with his/her adoptive parents. That whole event really surprises me, but it is heart-warming to think the oystercatchers will adopt a chick in need.  Here’s a photo of the little scrapper YT who is a real survivor! Photo by Alan Wilde.

My volunteers at the Texas City Prairie Preserve reported a near fledging chick the previous Friday so on Monday we went to try to band it. Too late! It flew away from us when we approached. The birds did really well up there. Three pairs fledged a total of four chicks between them.

On Wednesday I checked out Bastrop and Drum Bays with Pete and Peggy Romfh. The wind has backed off and so even though the rivers are still at flood stage pushing lots of water into the bays, the tide has finally gone a bit. We encountered a small pod of dolphins on our way out Bastrop Bayou from the boat ramp. That is always fun! Out in the bay the water was like glass. Photo by Susan Heath.

I can tell you that we get maybe one day like this a season so it was a real treat to not have to fight the wind. We also spotted a frigatebird sitting on a post. They really like this bay for some reason and we see them out there all the time. Photo by Pete Romfh.

We found one pair with a one egg nest in Bastrop Bay. It is the only pair whose island is high enough that it hasn’t been underwater for the last month. We only found one other pair of oystercatchers in Bastrop Bay and they had no nest. There weren’t any oystercatchers in Drum Bay at all. The islands out there are finally above water but I think those birds have probably given up for the year. On our way back we spotted another pair of adults and there were two one-year olds hanging out with them. One was unbanded but one was a chick from Bastrop Bay from last year. Photo by Pete Romfh.

At the boat ramp where we launch for these bays some Cliff Swallows always show up in late May and nest under the bridge. This is curious to me as Cliff Swallows return in the spring much earlier than this so I always wonder why these birds show up so late. At any rate, Pete got this nice photo of them in their nest burrows. Photo by Pete Romfh.

On Thursday it was time to check East Matagorda Bay. Most of the pairs in that bay started early and as a consequence there are lots of fledged chicks out there.  I was joined by Amanda Hackney, Audubon Texas Coastal Biologist and Brooks Short, GCBO volunteer. Once again the weather was quite nice and I was thinking how much I would love to have a day like this in February out on the water! I guess we pay the price for these nice days by suffering through all the bad ones out there. We found that most of the fledged chicks were not on the islands where they grew up so I’m guessing they were off feeding somewhere. The tide has finally gone down some because the wind backed off so I imagine there are some good feeding opportunities out there that haven’t been available for the last two months. The one chick was I concerned about was still alive so that was a very welcome site. Photo by Susan Heath.

It still doesn’t look big enough to fly despite the fact that it is 10 days past fledging age. With the tide so high the parents probably haven’t been able to feed it very well and so its development has been delayed. It looks like its crop is pretty full in the photos though so I guess they are stuffing it full now. I expect it will be able to fly quite nicely in two weeks when we go out to check on it again. There was another chick that wasn’t able to fly the last time we were out and I was hoping to find it doing well today. We found it with its parents and it looked much more developed than last time.

Its sibling was not present but that chick was much bigger so I expect it was off with the other young birds taking advantage of some good feeding opportunities. On our way back to the boat ramp we checked once again to see if any of the chicks had returned from feeding but they had not. We happened upon a Surf Scoter hanging out near an island where I have seen Surf Scoters twice before in June. What a weird thing! I guess there must be some food resource there that lingering scoters like. Here’s a photo of it. Photo by Susan Heath.

Just a reminder that we have chicks ready for adoption!

If you just want to donate you can do that through our Just Give portal.