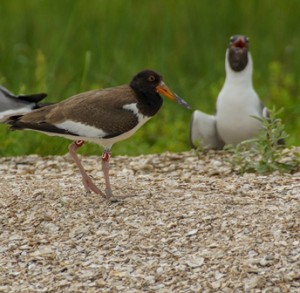 Tropical storm Bill changed all my monitoring plans. I had to reschedule the planned outing to West Galveston Bay from Monday, June 15 to Friday, June 19. Fortunately all my volunteers were still able to help so on Friday, I headed out with master naturalists Alan Wilde, Chuck Snyder, and Brenda Gonzales. I was very afraid of what we’d find with respect to all the ground nesters on the islands but the news was largely good. Up in Swan Lake we found all the oystercatcher pairs that were supposed to be there and we discovered one of them (K7 & unbanded) had a fledged chick! I was suspicious that this pair had a chick the last two times we were out but their territory is right in the middle of a nesting colony of Forster’s Terns and Tricolored Herons so we didn’t go ashore to check for a chick and they kept it hidden from us. Once again the oystercatchers are smarter than Sue! Since we didn’t know about it, it is unbanded but its great news that they fledged one and it made it through the storm. 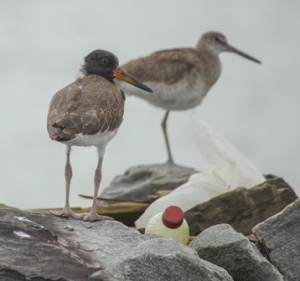 All the Forster’s Tern nests and chicks that were there the last time we were out were gone but the herons seemed to be ok and we saw a bunch of chicks sticking their heads up from nests to check us out. 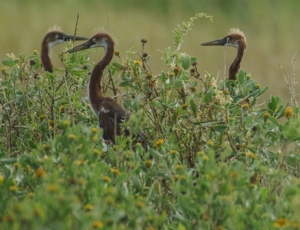 Back down in West Galveston Bay we checked out the two islands that have a lot of ground nesters including Forster’s, Royal, Sandwich, and Gull-billed Terns and Black Skimmers. Amazingly they all seemed fine. The water must not have gotten as high I thought it did. 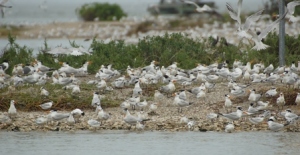 We found all three chicks that belong to pairs on Struve Luci including JY who can now fly! 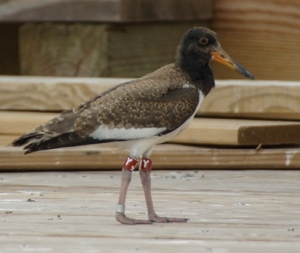 We also found JX who was trying to hide behind the spartina and YT was still hanging out with its adoptive parents L0 & unbanded.

I was particularly happy to see JN & JE with both their chicks (YU & YW) because last time we saw them they only had YW with them. Here’s YU. 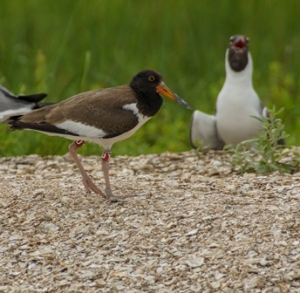 We discovered two adults with birds that aren’t their mates. UF was hanging out with J6 on his island. We saw these two together the last time we were out as well so I’m wondering if something happened to P4, J6’s mate. I hope not. They fledged a chick this year (YY) so I’m hoping that P4 is just off with the chick somewhere. UF was banded as a chick in 2012 near the Tiki Island boat ramp and she is just now old enough to breed so she’s clearly looking for a mate. 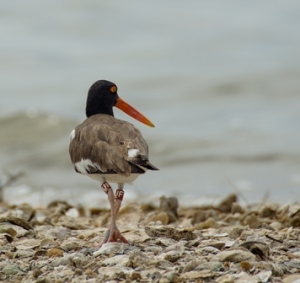 [Alan saw P4 return to the island the next day while he was out kayaking and she was most displeased to fine UF there. It will be interesting to see who wins that battle. Stay tuned!]

We also found R3 hanging out with an unbanded bird instead of R4. Alan saw R4 just a week or so ago so hopefully nothing’s happened to him. Only time will tell though.

I had to reschedule my last trip to the Brazoria Bays (Bastrop and Drum) from Wednesday, June 17 to Monday, June 22. Alan joined me so he could see another of our field sites. The tide was down more than it has been since early April although it wasn’t really low by my standards. At any rate, the oystercatchers in Drum Bay have given up on nesting this year. Of the six pairs that nest there, we only found one pair (JT & unb) and one male by himself (JK). I was glad to see JT as I haven’t seen him since early April. I’m sure with the tide so high he was just off somewhere finding food though. 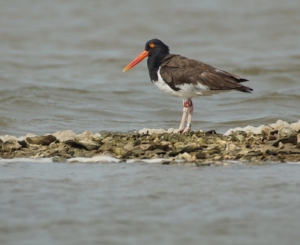 In Bastrop Bay we found two of the four pairs holding court on their territories. I had thought that at least one of these pairs might lay a new nest after my last time out, but if they did TS Bill put an end to it so I’ll never know if they did or not. We checked out the mouth of Bastrop Bayou because there are some reefs there and I frequently see oystercatchers foraging there. Sure enough we found YL, a one year old that is the product of 29 & unb (29 is paired with CH this year) in Bastrop Bay. She/he was in this location the last time I was out as well so clearly it has decided this is a good spot to forage. 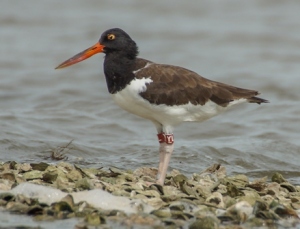 I rescheduled my trip to East Matagorda Bay from Thursday, June 18 to Tuesday, June 23. Refuge biologist Jennifer Wilson accompanied me to check on all the nesting birds in the bay. Right away we saw some habitat changes after Tropical Storm Bill. One of the small islands along the GIWW where a pair of oystercatchers nest was completely leveled by the storm. Here’s a goofy photo of me from a few years ago showing what it used to look like (photo by Sasha Munters) and one showing what it looked like on Tuesday (photo by Susan Heath). The change was pretty dramatic. 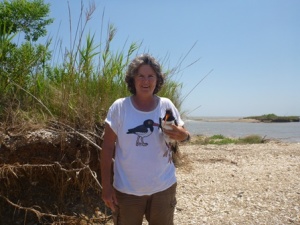 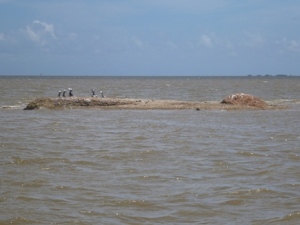 Several of the other islands out there were much reduced height as well but none so dramatic as that one. Some of them are now so low that they are probably not viable for nesting however. Maybe they will get built back up with shell over the next 6 months before the oystercatchers begin nesting again. We were happy to see that Dressing Point, a large rookery island in that bay seemed just fine and the birds were still going strong. We found a young spoonbill swimming around in the water there. We tried to put it back but we couldn’t get the close to the island in the boat and when we put it back in the water, it just kept swimming in circles and wouldn’t go back to the island. It looked like it had been beat up pretty well on the head so we decided maybe it had some brain injury. We collected it again and took it with us to bring to the rehabber.

We only saw two oystercatcher chicks the whole day. One was unbanded, probably the chick from the first brood out there that we were unable to catch. The other one was HX one of the last ones we banded. 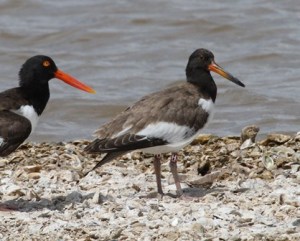 We didn’t see the one chick I wanted to see though (JW). That was the last one to fledge and the one I was the most worried about. One of its parents had been replaced by an unbanded bird the last time I was out and though JW seemed to be stuffed full of food, I wasn’t sure it would make it since it had delayed growth due to near starvation conditions with the high water for so long. So I don’t know if it survived and was just off feeding somewhere else or if it didn’t make it. I guess I will never know unless someone reports seeing it or I see it somewhere. Since this was my last scheduled trip out there, I won’t be checking again for it on the nesting island anytime soon. Although

When I dropped the spoonbill off at the rehabber she said it seemed like it had been pretty beat up but wasn’t so emaciated that it was too far gone to save and she thought she could rehab it back to health. If so, she requested we take it back out to the island to release it where it was hatched, so maybe I will be back out there again soon!

This will be my last blog post about regular field visits but we are still waiting to hear whether our grant proposal is funded so I will post to the blog when I hear about that. If get out again this summer to check on everybody, I’ll let you know how it’s going! Thanks for reading The Oystercatcher Diaries this season. I enjoyed sharing this project with all of you.