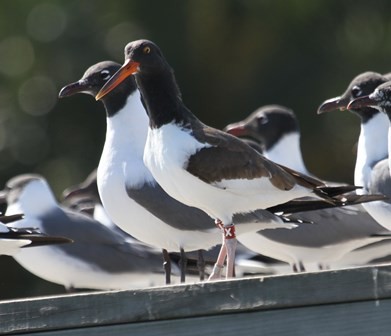 It’s that time again! The oystercatchers are starting to nest and I’ll be monitoring the birds in West Galveston Bay every few weeks with the help of a great group of volunteers from the Galveston Bay Area Master Naturalists. This is part of the newly formed Oystercatcher Monitoring Network which is administered by the Gulf Coast Bird Observatory (where I work) and Audubon Texas through their Audubon TERN program. We’ve got volunteers monitoring birds by kayak in several areas now and if you want to monitor nesting oystercatchers, give me a shout and we’ll see what we can work out. The Galveston Bay Area crew put together a fabulous video about the program.

On Friday, February 26, I was able to make my first round of West Galveston Bay with the help of three of the volunteers from the group. Tim Long took myself, Alan Wilde, and John Wright out on his boat to check on all the birds and see how they were doing. It was really nice being chauffeured around in this sweet ride.

We are still working on getting a dedicated boat for the project but first we have to get a truck. We have an offer of a great deal from a local Ford dealer but we still need $10,000 to make it happen. If you know someone with a spare $10K send them my way! Once we get the truck, we’ll work on the boat.

Anyway, back to the oystercatchers. Over the last several weeks, I’ve checked on several pairs that I can see from shore and I had pretty good evidence that at least one pair was already incubating a nest so I couldn’t wait to get out there and see who else was. We made the rounds in Jones Bay and found a nest with two eggs on our second stop! Awesome. This pair only has one member banded (P3) but I feel pretty certain the unbanded bird is the same one. I’ve tried to catch that rascal any number of times but she is clearly smarter than me. 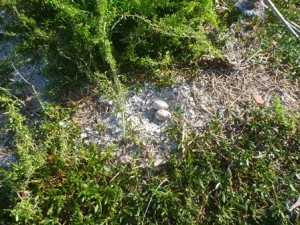 We found a number of young birds on the reefs down by Harbor Walk. It is always a happy moment to find a bird we banded as a chick all grown up and doing fine. I was particularly pleased to see YT with this bunch. If you kept up last year, you’ll remember that YT was adopted by a neighboring pair when his/her father died from injuries sustained during a hail storm. From the photos we took, he/she seems to be doing fine. 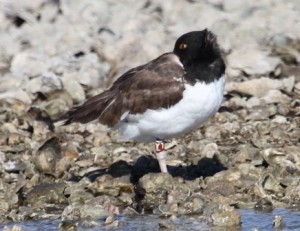 There’s been some wife swapping going on around North Deer and Marker 52 islands. Last year at the end of the season UF came along and usurped P4’s position as J6’s mate. UF is a bird we banded as a chick in 2012 so we know she’s 4 years old now. We banded P4 as an adult in 2011 so she is at least 3 years older than UF. I’m not sure how UF managed to push P4 out but she did. P4 moved over to a neighboring territory and is now paired with JJ. The previous two years JJ was paired with U2 but we saw no sign of her. She probably left to find a male with a better territory because she was unable to fledge any chicks while she was paired with JJ.

On South Deer we discovered another pair change. For the past two years Y7, a bird we banded as a chick in 2011, was paired with an unbanded bird on the Gangs Bayou island. On Friday, we discovered her paired with an unbanded bird on South Deer so she was apparently unhappy with her mate on Gangs Bayou. Since they never laid a nest the last two years, I’d say that was probably warranted.

This time of year we always check the docks along Sportsman Road. Lots of shorebirds like to roost there and we found nearly 20 oystercatchers. We checked for bands and found JX one of the youngsters from last year. Note the black still on its bill. 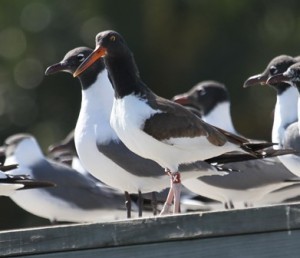 There were also a lot of Marbled Godwits and Willets there. So cool. 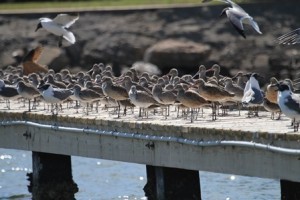 We didn’t have any more surprises until we got to Struve Luci. This island is very close to the shore and these are the birds I’ve been spying on for the last couple weeks through my scope. As I said I’d seen all four of them working on scrapes and I was pretty sure one was already incubating a nest but I was a little surprised to find that all four of them had nests! These birds are always among the first to have nests every season and I don’t know why. The all usually do pretty well though so I guess it’s working for them. One of the pairs was chasing off an unbanded intruder and we watched them repeatedly chasing and diving at the interloper as they tried to chase it away. It must be a bird trying to take over somebody’s breeding spot. I don’t think it’s going to have much luck on this island since they all already have nests.

We found another nest up in Swan Lake that belongs to K7 and unbanded. They nested early last year too so I wasn’t too surprised. I was happy to discover that one of the birds up there W6 now has a banded mate (X7) instead of the unbanded bird it has been paired with the last two years. W6 and X7 were both banded as chicks in 2011 and what’s amazing about them being a pair is that they grew up on two small islands that are right next to each other near the Tiki Island boat ramp. Do they know they grew up in the same neighborhood? Interesting.

My volunteers up at the Texas City Prairie Preserve haven’t found any nests yet but they did find something else interesting. One of the birds there (P8) apparently has a new mate, and that mate is YH, P8’s chick from two years ago. Hum. Never had that happen before. YH isn’t old enough to breed yet so we’ll have to watch and see what happens there. There’s been some wife swapping up there too as three of the four males on the end of the spit have different mates than they had last year. It seems the females did a little switching around!

On Monday, February 29, 2016, Bob and Ruth Friedrichs took me and one of their friends out in Lavaca Bay on their boat to band birds. Bob and Ruth plan to monitor the pairs there so we wanted to see how many where there and band some. We found seven pairs and one was already on a nest! We managed to catch two pairs and one member of another pair. Welcome to the project EH, EM, EN, CC, and CJ. We’ll be back to get your friends on another day! 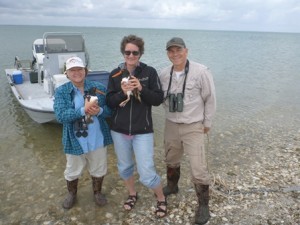 On Tuesday I headed out to East Matagorda Bay with Texas Mid-coast Refuge Complex biologist Jennifer Wilson. She wanted to check on the birds on Dressing Point, the only colonial waterbird island in that bay and we thought we could check on the oystercatchers while we were out there. We found most of the same pairs except at the Oyster Farm both of the banded birds were gone so now there are two unbanded pairs there. We found a nest with three eggs at Old Gulf Cut belonging to 17 & unbanded. The very last pair we checked on was R9 & unbanded. They have a tiny scrap of an island and never have much success. We discovered them standing on top of a berm along the GIWW that surrounds a dredge spoil placement area. We went to investigate and found that they had created a very nice looking scrape in the mud there by carrying shells. 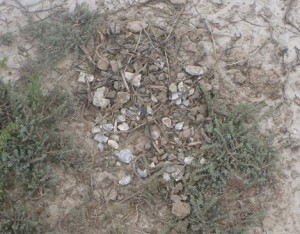 It’s a great spot for protection from overwash and human disturbance but it could easily be found by a coyote, raccoon, or opossum. I hope that doesn’t happen! It would be great to see them fledge some chicks from such an unconventional nest. When we were done with them, we set up the noose carpets on an unbanded pair and caught the male. Welcome to the party CF.

Several people have asked me about the Adopt-an-Oystercatcher program. I have been so busy getting things ready for my spring projects that I haven’t had time to set it up on our new website but you can still adopt a bird if you’d like to! Just send me an email and I can make some suggestions of pairs for you. If you aren’t familiar with that program – you can adopt a pair of oystercatchers for a $100 donation and I will update you monthly on their progress throughout the breeding season. I am only monitoring birds in West Galveston Bay on a regular basis this year so all adoptees will have to come from there.