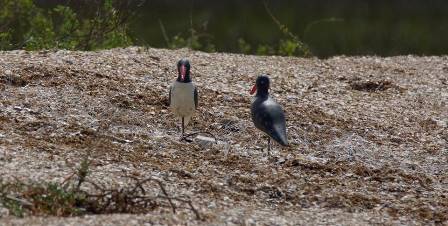 On March 11 I made another round of West Galveston Bay with Alan Wilde, Chuck Snyder, and John Wright. John took us out on his boat and again it was a sweet ride! John did a great job chauffeuring us around to the different locations.

Last time we found six nests and Alan found an additional one a few days later in Jones Bay. With all the storms we had in the few days prior to the 11th I was worried that a lot of those nests might have overwashed. We headed out to Jones Bay and were very happy to discover that both nests there were fine. 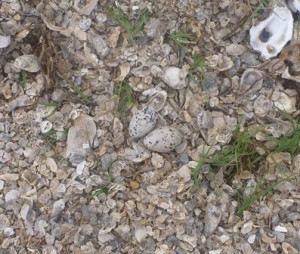 We headed down to check on the Harbor Walk pair (ET & unbanded). They weren’t there on our last check so I was anxious to see if they had returned. Sure enough they were hanging out on a shell bank where they nested last year. They weren’t the only ones who were back. The Wilson’s Plovers that nested in this spot where there also. Nobody seemed to have a nest yet though.

Back up the GIWW to Marker 52 and North Deer, we checked on all the pairs in that area. None of them have nests yet but the Brown Pelicans are wasting no time! 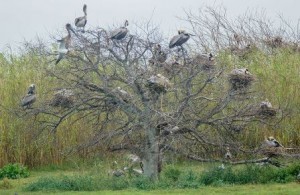 From there we headed over to South Deer. Right off the bat we found that L3 & L4 have a new nest! It only had one egg but one of them was guarding it and Chuck’s spotted it with his eagle eye. The next pair wasn’t there which was surprising. Last year they were one of the first to nest. We found two more nests as we worked our way around the island. The White Ibis have returned by the 100’s and they were all looking pretty fancy in their breeding colors. 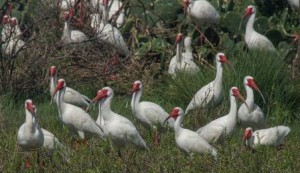 Around the backside of the island there are three unbanded pairs in a row which makes it hard to keep things straight so I wanted to try to get some of those birds banded. I spent some time in the weeks before the season rehabbing the noose carpets we used a few years ago catch birds. Noose carpets are basically a piece of fencing with fishing line nooses attached. You bury them under the shell with the nooses sticking up and put some decoys with a call around them. When the birds come into chase off the intruder they get caught in the nooses. At least that’s the way it’s supposed to work. The middle unbanded pair had a nest so we decided to leave them alone (we’ll try the nest box on them next time) and concentrate on the third unbanded pair. We set the carpets up and Chuck went and spooked the birds from the spot where they were watching us. 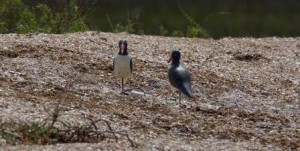 They flew around and landed on the other side of Alan so I went and spooked them again. This time they flew in a circle and must have seen the decoys because they headed right for them. The both landed and started doing their cocked tail display in which they lower their heads, cock their tails up, and start calling. When the decoys didn’t move, the real birds got closer and closer until finally one of them got caught. I took off running to get it, tripped and fell and had to get up and start running again. This is why I used to get the grad students to do this stuff. When I was about 30 feet away the bird managed to free itself and flew away. All that work for nothing! I’ve learned from past experience that won’t come back once that happens so we picked everything up and went on our way. We’ll have to try the nest box on them too when they lay some eggs.

We checked the docks along Sportsman Road but found only one banded bird – JY. JY is a chick from last year from Struve Luci and we haven’t seen it in a while so it was good to know it’s doing well. There was nothing happening on the Gangs Bayou island so we headed up to check on the Sportsman Road pair. They were both present (15 & 16) but there was another bird nearby XA. I don’t know if XA is trying to take over from one of that pair or was just there foraging. XA was banded as a chick on Struve Luci in 2013 so it is old enough to breed this year. We’ll have to see what happens there.

We went to Jigsaw next and found two of the three pairs there had nests. The terns are back in force too! They are really beautiful in their breeding plumage. I guess that’s why they have the name Royal Tern.

Then we headed over to Struve Luci, the island I was anxious about. All four pairs had nests on our last check and with the high tides I wasn’t sure what happened. Three of the pairs were fine but the northernmost nest must have overwashed because the birds were not there tending to it. In fact we didn’t see that pair hanging out anywhere. We headed up to the Swan Lake area and found the pair at Zimmerman Point had a new nest but the pair at Malone reef did not. They were just loafing around the shoreline. In Swan Lake proper we spent some time replacing a bunch of signs that were broken. 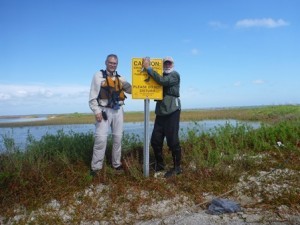 The eggs were gone from the nest we found on our last outing and the adults weren’t there so I doubt it hatched. It must have failed. We found a new nest for another pair there and discovered some more wife swapping had occurred. N3 (a female) has been partnered with 11 for the last four years but this year she moved to another territory in the area and is now paired up with X4. X4 was paired with X9 (both birds banded as chicks in 2011) for the last two seasons and they defended the territory but never laid a nest. Maybe the more experienced N3 will spur some action there. N3’s former mate 11 is now paired with an unbanded bird. I can understand why N3 moved on. The island in 11’s territory has eroded away to such a low level that I doubt they can successfully nest there anymore.

When we were done in Swan Lake we headed down to check on the last two pairs near the Tiki Island boat ramp. Both of them were hanging out on the docks so we went onto their islands and replaced two broken signs and then wrapped it up for the day.

After three days of nothing but rain and clouds, the weather had cleared off and we had a beautiful day with blue skies and mild wind. It was a great day to be on the water and I once again felt so fortunate to be able to spend the day checking on the oystercatchers! Seven new nests today and two failed ones. If those first nests make it, we may see some chicks on our next outing. Wow. Time flies!

Here’s a view of our track plotted by Chuck. 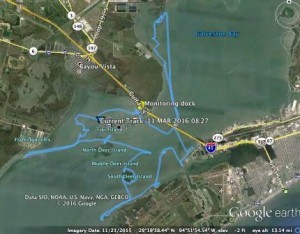 Big news! The Adopt-an-Oystercatcher program is up and running. I’ve only added pairs to the list that are being monitored regularly but if you want adopt another pair, just send me an email and I can make it happen. If you aren’t familiar with that program – you can adopt a pair of oystercatchers for a $100 donation and I will update you monthly on their progress throughout the breeding season. It’s really fun and you’re donation will help support our program.