I can’t believe that March is coming to a close but that it is and the oystercatcher breeding season is in full swing. I was going to build up to it but I just can’t hold it in. We’ve got chicks folks! We headed out from Tim Long’s dock to check on the pairs in Jones Bay. The first pair (FR & Y2) were still incubating so we left them to their devices and moved on. When we got to P3 & unbanded’s island we discovered they had two chicks! So exciting. We didn’t want to get too close so here’s a distant photo of one of the adults with the chicks. 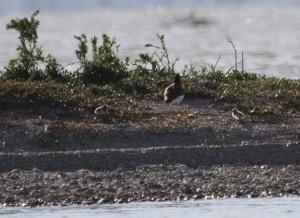 The next few pairs all had new nests (ET & unbanded, AP & 23, and H0 & JC). Alan Wilde had seen the last two pairs incubating from his kayak so I had a heads up that they both had nests. We replaced two broken signs in the area of these nests and collected a broken one that was laying on the ground. The other two pairs on that island didn’t appear to have anything going on, but JR & JH on North Deer also had a new nest. The Brown Pelicans are well into their nesting season too and there were many of them on nests on Marker 52 and North Deer. We also checked on J6 & UF but they were just loafing on the edge of the water.

The saga of J6 is really interesting to me. Over the six years of this study, J6 has been paired with four different females on his island territory. He was paired with J5 in 2011, K5 in 2012, P4 in 2013, 2014, and 2015, and now UF in 2016. The current theory about oystercatcher mating systems is that the male stays on his territory and the females pair with a male whose territory they like. This seems mostly true for us as most of the males have remained faithful to their territory while the females have moved around quite a bit. J6’s former mate P4 has been paired with three different males that we know about. She was absent in 2012 and was likely paired with male on a territory that we weren’t monitoring. Anyway, J6 & P4 did well in their pairing. For all three years they were paired, they fledged a chick. I figured they’d be paired until one of them died but it was not to be. Last year, their chick fledged early and P4 seemed to off with the chick for a good bit of time while J6 remained on the island territory. In the later part of the season, J6 was suddenly in the company of UF, a bird we banded as a chick in 2012 on one of the tiny islands near the Tiki Island boat ramp. We witnessed altercations between J6, UF, and P4 on several occasions and we couldn’t really figure out what was going on but it is apparent now that UF has taken P4’s place as J6’s mate. How did that happen? Did J6 decide he wanted a younger mate? We know that UF is 4 years old. P4 was banded as an adult in 2011 so she was at least 3 when she was banded. That was 5 years ago so she is at least 8 now. Or was UF able to push P4 out of her position as J6’s mate somehow? I’ll never know but these are the things I think about when I can’t sleep at night!

Anyway, when we checked out South Deer, there were only two pairs of oystercatchers present and there are usually seven. What’s up with that? Three pairs that had had nests previously had obviously failed and we didn’t find any new nests. We decided to try the noose carpets on one of the unbanded pairs and we managed to catch one of them. This time I was able to get the bird without it breaking free of the nooses and we banded it CE. I couldn’t tell whether it was the male or the female because the measurements were intermediate so we’ll have to watch and tell from behavioral cues. Here’s a photo Tim and Jo holding the newly named CE. 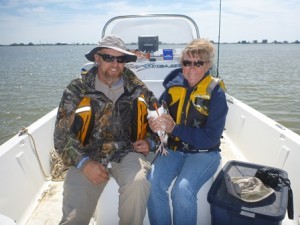 The pairs on Gangs Bayou island all seemed to be preparing to nest but we didn’t find any eggs there. One end of the island was covered with white pelicans and when we approached to check on the oystercatchers, they all stood up in unison at attention. 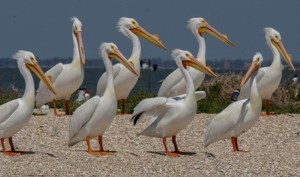 We did find a nest just a bit east of Sportsman Road on Galveston Island though. This pair, 15 & 16, didn’t nest last year, at least where we could see and I was wondering what was up with them. It was good to find that they have a nest going this year. I hope a mammal doesn’t get it. This is the area where one of my camera’s captured a cat taking the eggs from the nest several years ago.

When we checked Jigsaw island we were quite surprised that there were not terns present. Last time the island was covered with them and since they nest here I expected them to be going full blast. It was a bit eerie there without the terns. Since I wasn’t going to bother the non-existent terns, I went on the island to check on the oystercatcher nests. The unbanded pair still only had one egg (talk about putting all your eggs in one basket!) and T5 & T6’s nest which had had three eggs two weeks ago only had two. The darn gulls must have gotten one as it hasn’t been long enough for it to hatch yet. This poor pair struggles every year to raise a chick with all the gulls in their territory. Last year they caught a break because there were so many Royal Terns that the gulls didn’t have much room to nest so there weren’t very many of them. It’s the only time I’ve seen T5 & T6 with a chick and I’ve been watching them for six years now.

More good news when we reached Struve Luci. It was time for all three nests there to hatch and sure enough all of them had. Woohoo! We didn’t see the chicks from the first pair (L8 & L9) as they kept them hidden in the vegetation but from their behavior it was pretty clear they were guarding chicks. The second pair K6 & JA were walking along the ridge of the island nonchalantly as if nothing was going on. I know better! That pair is really sneaky and I suspected they had a chick even though we didn’t see it. When we reached the next pair (12 & unbanded) we saw one of them standing up in the vegetation where they have kept their chicks hidden in years past. As we watched, the other adult flew in with food in its bill. Just about the time it landed, it saw us watching and you could tell it wasn’t sure what to do. I mean it had already flown in with food obviously for chicks, but it didn’t want to feed the chicks while we were watching. I swear it had a look on its face like it was thinking “uh oh. busted.” Before it could react and try to cover its tracks two chicks ran out of the vegetation and grabbed the food so we know that pair has two! Here’s a photo that Alan got of one of them. 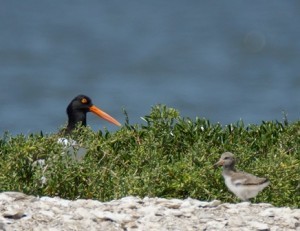 We circled around and cruised back down the other side of the island so I could get a handle on the progress of the terns nesting and when we got back down where K6 & JA were, JA was standing up on the ridge and there was a chick nest to him. I knew it! Those rascals. Alan was quick on the trigger and got a photo.

Not much other excitement for the day. One of the nests along the shoreline to Swan Lake had failed. The adults were not anywhere around so I suspect the coyote got their eggs. We did not go ashore to check it out though. There usually isn’t any evidence of what happened. There were a lot of white pelicans up in Swan Lake too and it made me wonder what the oystercatchers think about all those big lumbering feet walking around where they plan to lay eggs.

I haven’t been out to any of the other field sites this year except one trip to East Matagorda Bay. I’m anxious to get out there and see what the birds are up to but it will have to wait until I have time and a ride with Jennifer Wilson, the USFWS biologist at the mid-coast NWR. She is very supportive of this project and gives me a ride whenever she can!

Remember – the Adopt-an-Oystercatcher program is up and running. I’ve only added pairs to the list that are being monitored regularly but if you want adopt another pair, just send me an email and I can make it happen. If you aren’t familiar with that program – you can adopt a pair of oystercatchers for a $100 donation and I will update you monthly on their progress throughout the breeding season. It’s really fun and you’re donation will help support our program.