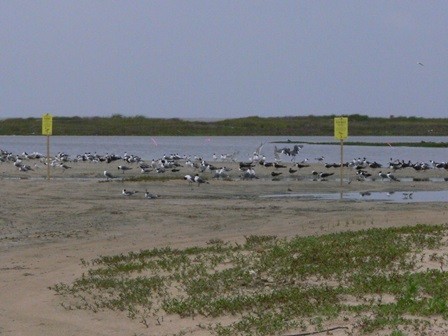 The nesting season for Wilson’s Plovers has officially begun at Bryan Beach and the Matagorda Bay Nature Park! The breeding habitat at Bryan Beach is located behind the primary dunes and consists of predominantly mudflats and ephemeral wetlands with some upland/dune areas along the edges. This nesting habitat is preferred because it provides abundant food resources. I found five nests at Bryan Beach last week and three of them were laid in elevated grassy areas. However, I was quite surprised to find two nests were simply laid in the mud along the fringe of the ephemeral wetlands. 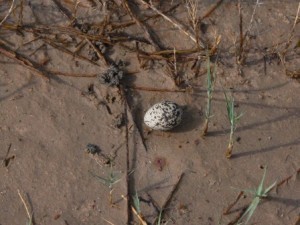 All the nests had one egg, so were laid during the last 24 hours. As a reminder, the main nesting area at Bryan Beach is highly disturbed by recreational activity and garbage dumping and pictured below is a nest laid near vehicle tracks. Unfortunately, I did not have high hopes for several of the nests when I looked into the forecast. The rain events and flooding on April 18, 2016 inundated the expansive flats except for the elevated, grassy areas and four nests were overwashed. 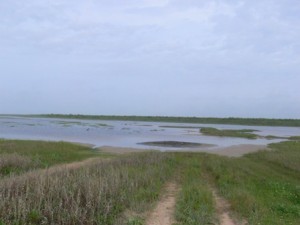 Portions of the breeding habitat at Matagorda Bay Nature Park are similar, but there is also traditional beach nesting habitat like low lying, sparsely vegetative dunes and sand flats. There are currently five nests and many of them were laid over the past week. We found two nests with a full clutch (3 eggs). The nest and eggs are very cryptic on the ground, and we often have to rely on bird behavior to know a nest is present within the area. Females often display broken wing in an effort to deter predators away from the nest. 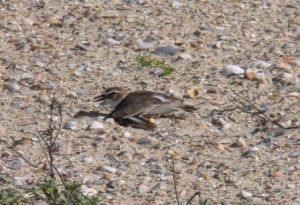 As mentioned in the last blog, we are placing unique color leg bands on the birds so we can track individuals and family units. We used the box trap method to capture adults on the nest. The box trap is propped up at a 45 degree angle over the nest using a stick with a line attached to it. Someone lies in wait underneath a camouflaged sheet and once the adult returns to incubate, we pull the line so the box falls down. We deployed the box trap on three nests and caught all three incubating adults! Two were female and one male. All individuals returned to incubate within five minutes! In my previous experience trapping shorebirds, it’s not an easy task and we always felt lucky to capture at least one bird, so we were definitely spoiled that day. Here’s a photo of the male we captured. 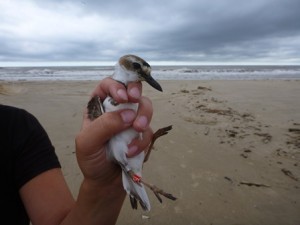 We began what I believe, will be our most challenging work this season, putting up symbolic fencing and area closures to protect and raise awareness about beach nesting birds. Vehicles are allowed on the beach at both sites and many are driving through valuable coastal habitat, unaware that many bird species are breeding. At the Matagorda Bay Nature Park, there are many established roads going through and along breeding habitat. Our goal is to provide beach access through 1-2 main roadways and work on closing many side roads to reduce disturbance. Pictured below are two roads along the ephemeral wetlands we placed symbolic fencing along to limit access. 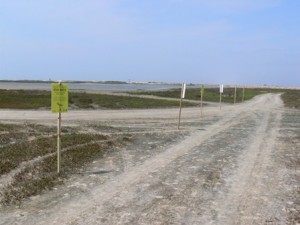 At the Matagorda Bay Nature Park, there is an amazing lagoon that provides loafing and foraging habitat for a suite of coastal bird species. We noticed many vehicles were veering off the main access road and disturbing the lagoon area. We fenced off a portion of the lagoon area, and will continue to fence along the periphery of the lagoon and additional breeding habitat during the next month. After the busy weekend, we were pleased to find our signs were still in place and not vandalized! Pictured below are coastal bird species loafing and copulating right behind the protective fencing along the lagoon. 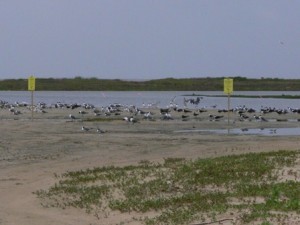