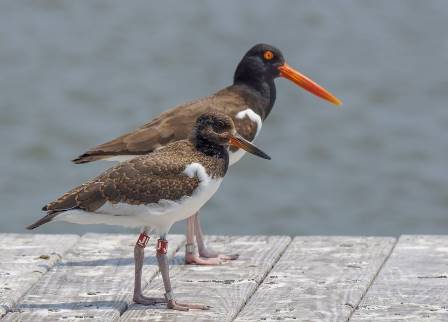 We weren’t able to make our scheduled trip on Monday, April 18 because of the weather and the first time we could get out was Friday, April 22. John Wright escorted us on his boat and I was joined by Alan Wilde, Amanda Anderson, and Shelly Fisher. If you’ve been reading this blog for a couple of years, then you may remember Amanda, as she worked on the oystercatcher project when she was a graduate student at the University of Houston Clear Lake. After she graduated, she spent a year in Florida working for the Florida Fish and Wildlife Commission but Texas was calling and she returned last November. Now she is working for GCBO as our shorebird technician on our Wilson’s Plover nest monitoring project. She will be posting blogs about that project every two weeks if you are interested to learn about Wilson’s Plovers and their nesting trials and tribulations. Shelly Fisher is a wildlife biologist from Canada who I met several years ago at Fort Morgan while we were banding songbirds there. She is vacationing on the Texas coast for two weeks and was anxious to get some oystercatcher experience. I was glad to have these two energetic and much younger than me helpers because we expected to band some chicks on this outing.

The storms that lasted Monday through Wednesday carried with them winds over 20 mph with lots of rain and high tides. Here’s a chart showing how much higher the tide was than predicted in Galveston Bay.

I don’t think I need to point out that this is not good for oystercatchers. Past experience has taught me that anytime the wind gets about 20 mph the oystercatchers are in trouble so I was afraid of what we’d find when we headed out. Right off the bat, we found that a pair in Jones Bay that had had small chicks now had none. John and his wife Lynn had been watching this island from their house on Tiki Island and they saw that it had gone nearly underwater so they knew the prognosis was not good for this pair. As you can see there wasn’t much of the island above water. 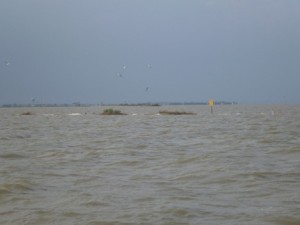 The other nest in Jones Bay had failed also and the pair that had had two chicks before now only had one and that one was much smaller than it should have been for its age. That chick was due to be banded so we did (it is now LW). I hope it makes it! Here’s a photo of Shelly holding LW. 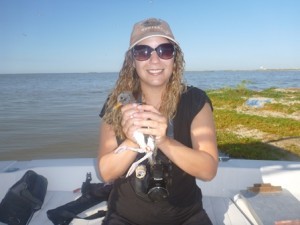 We spent the day checking on all the nests that had been there before the storm. In all, 14 nests had failed and three others may have failed but we couldn’t tell and thought maybe the adults were sheltering chicks. We did find three new nests that were in areas protected enough (or high enough) that they made it through the storm. We also banded two chicks from a pair on Struve Luci. One of them (KY) was much bigger than the other (KX) and I found myself hoping the parents can find enough food to keep the smaller one going. As you can see from the above chart the tide is starting to go down so hopefully all will be well with those two. It’s really hard for the adults to find enough food for themselves in addition to two chicks when the tide is so high. Here’s Amanda holding KX and KY. 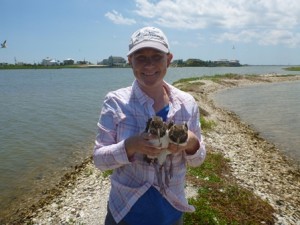 We had a couple surprises with the adults too. On South Deer JE, who has been paired with JN for several years, was missing and JN was hanging out with an unbanded bird. Where did JE get off to? Over on the shore of Galveston Island where there has been one pair since the beginning of our study (15 & 16) we found two pairs! 15 & 16 were present and acting very much like they have a new nest though we couldn’t find it. The other pair consisted of Y5 and an unbanded bird. Y5 has yet to breed (that I know about anyway) so it will be interesting to see if they try to nest in this location.

On Wednesday, April 27 we returned for our regularly scheduled trip and were escorted around on Tim Long’s boat. I can’t say enough how much I appreciate Tim and John taking us around to check on the oystercatchers on their boats. We couldn’t do this without their support! The tide was super high, even higher than it had been the previous Friday and we found most pairs sleeping on their islands. I guess there isn’t much for an oystercatcher to do when the tide is high and they’ve already eaten. No sense laying a new nest when you can barely get enough to eat for yourself. 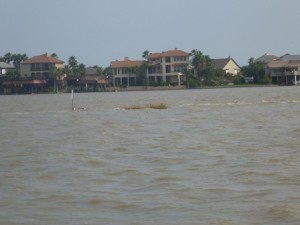 The fate of the three nests that we weren’t certain about last Friday was pretty clear today. All those pairs were either not present or were sleeping on the island edges so they clearly didn’t have any chicks to take care of. The two nests we found in West Galveston Bay and the two near Swan Lake were all still being incubated so at least there are four nests still left. The best news though was that all four chicks we’ve banded so far were still with their parents and two of them could fly! We found little JU with his father on a dock across from the nesting area and when approached so Alan could get a photo they both took off. It’s really exciting to see a young chick fly for the first time. It must be exhilarating for them too although they are a bird and that’s what they are supposed to do so maybe not. Anyway, we were all excited to see JU fly. 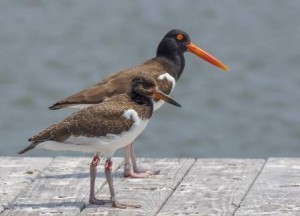 The pair next door to JA & K6 had two chicks and one of them could also fly too (KY). The other one (KX) was smaller when we banded them so I expect it will be a few days before it can fly too. 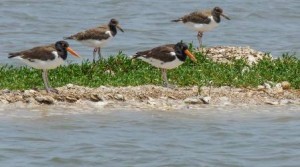 We managed to trap one of the adults for the unbanded pair on that same island with the box trap and we banded him HM so now there is not an unbanded pair on Struve Luci. That is very nice because it helps to tell all the pairs apart. All in all it was a good day. Since we already knew most of the nests had failed we could celebrate the fledged chicks.

Remember – the Adopt-an-Oystercatcher program is up and running. I’ve only added pairs to the list that are being monitored regularly but if you want adopt another pair, just send me an email and I can make it happen. If you aren’t familiar with that program – you can adopt a pair of oystercatchers for a $100 donation and I will update you monthly on their progress throughout the breeding season. It’s really fun and you’re donation will help support our program.