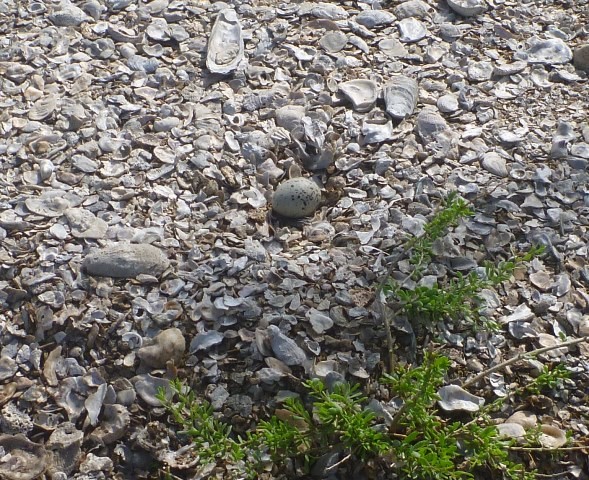 Finally some good news! But…. You’ll have to read the blog to find out what it is!

We moved our survey from Wednesday back to Tuesday in response to the weather report. When Tim, Alan, and I started the day it was beautiful. Slight wind, blue sky, calm waters. It was the kind of day that makes me feel guilty for getting to call these surveys work and we all breathed a sigh of relief at not having to fight the wind for a day. We have an established route that we follow that starts in Jones Bay, works its way through West Galveston Bay, heads up to Swan Lake north of the I-45 bridge, then back down to the pairs at Tiki Tom’s, and back to either Tim or John’s house depending on which boat we are using. If the wind is going to be bad in the afternoon we do the route in reverse so we can get the long haul across Galveston Bay to Swan Lake over while the wind is less intense. As we pulled out from the dock, Tim asked which way we needed to do the route. I replied we might as well start in Jones Bay since the wind was so light and not predicted to get stronger. Those words would come back to bite me later in the day unfortunately.

Nothing new in Jones Bay but we got a good look at P3’s chick LW (or Lynn Wright!). 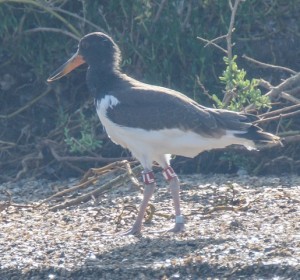 We couldn’t find ET and mate so we checked out the backside of their island and there they were both feeding along the shoreline. Back up at Marker 52 we only saw one of AP & 28 and that is a good sign that the second bird is on a nest. When we got closer, suddenly the other one walked out from a shell bank. Ding, ding, ding. My nest radar went off so I went up to check. Yep. A one egg nest. Awesome! Finally they are starting to renest after all the storms and high tides. 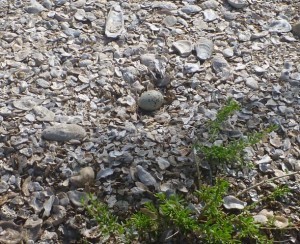 There wasn’t anything happening with the other pairs in that area but they were all there hopefully getting ready. We got a surprise when we found P3 feeding on what was formerly part of JJ’s territory. JJ and P4 have moved around the corner to get away from the Brown Pelicans so I guess they don’t feel compelled to defend that part of their territory anymore. 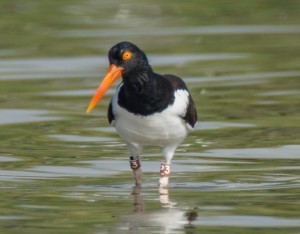 We headed over to South Deer and found most of the pairs present but none acting like they had a nest. The Caspian Terns have kicked it into gear and Alan got some really good photos. 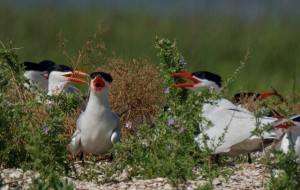 There are also a lot of fledged White Ibis chicks now. Most people don’t know that very young White Ibis are black so they look a bit like White-faced Ibis. 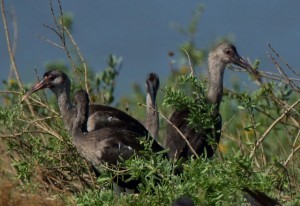 Over on the Sportsman Road docks we found YT all by her lonesome. Usually she has some friends with her so I’m not sure why she was alone today. She’s only a year old so not ready to breed yet. Nothing happening at Gangs Bayou either so we headed back up to check on 15 & 16, the pair that nests along Galveston Island just north of 8 Mile Road. This is about the time we noticed the wind had really picked up. There went our nice calm day. Alan commented that I could now call it work again!

We found a couple surprises in this area. First – an unbanded pair of birds hanging out near the channel that runs inland just east of 8 Mile Road. Second – XA and YK hanging together as if they are a pair a little further along the shoreline. XA is three years old and appears to be a female from Alan’s photos. YK is only two and appears to be a male. It’s not 100% but you can get a good indication of oystercatcher sex by looking at their eyes. Females have what are called eye flecks and males have little to none. In Alan’s photos you can see that XA has some and YK does not. 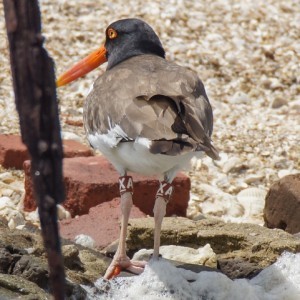 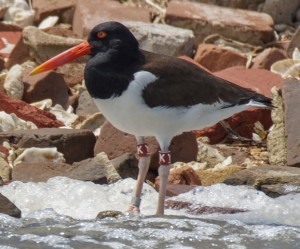 Both these birds were banded as chicks – XA in 2013 on Struve Luci island in West Galveston Bay and YK in 2014 on an island just north of the I-45 bridge. It will be interesting to see if they remain a pair into next season when they are both old enough to breed.

Here’s a photo of XA when she was just a wee thing. 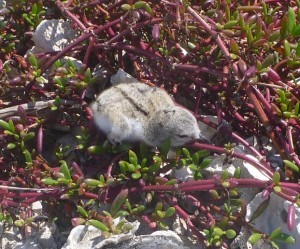 We found 15 & 16, the only pair that was supposed to be in that area hanging out and looking suspicious so I went up to check on them. I found they had prepared a very nice scrape but hadn’t laid any eggs yet. Soon though!

Over on Jigsaw we found that both the unbanded pair and T5 & T6 had nests! One had one egg and one had two eggs. These birds nest in the middle of large Laughing Gull colony so I don’t hold out much hope for these nests but you never know. Maybe they will make it. Let’s hope anyway. On Struve Luci we found all pairs present and accounted for. Both chicks (JU and KY) were present with their respective parents. 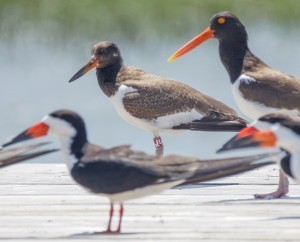 L8 & L9 may have a new nest but they are right in the middle of a large Black Skimmer colony and now that the skimmers have started to nest, it would cause too much disturbance to go up and see. We’ll just have to watch them from afar and see if we can catch them incubating. HM & unbanded were just standing around so no new action there.

We headed under I-45 and when we got out into Galveston Bay, the full force of the wind hit us. Yuck! There were white caps everywhere. Captain Tim did his usual excellent job of piloting us across the bay in rocky waters. There wasn’t anything happening with the three pairs that nest along the shore between there and Swan Lake. In Swan Lake proper we found another new nest! R5 & X3 were standing atop a shell mound so we checked it out. Another one egg nest. 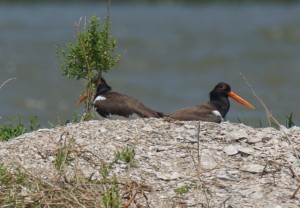 This area is prone to coyote predation so we will keep our fingers crossed that the coyotes leave them alone and they can raise a chick. We found some birds taking refuge on the rock jetties there again. They really like to sit on those jetties! 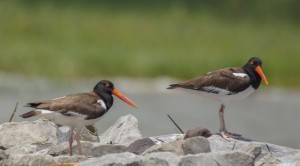 It was easier crossing back over the bay because we had the wind behind us and we went to check on the birds near Tiki Tom’s. The unbanded pair there has been missing for quite some time but we found R4 & unbanded sleeping on a dock where they usually are. The islands that these birds nest on are so small that they’ve been mostly underwater for a while leaving the birds no place to nest.

When we returned to Tim’s house, I checked the weather. The wind was 18 mph out of the north! Not what was predicted Mr. or Mrs. weatherperson! Anything above 15 mph makes me reconsider whether we should go out so that gives you an idea of how much the wind kicked up from the nice peaceful outing we started out with.