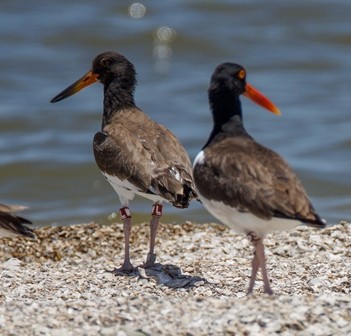 We had to split our field day between two days because of the weather. We were originally scheduled to go out on Friday, June 3rd but with a weather forecast of 90% chance of rain for most of the day, we moved it back to Wednesday, June 1st.  Even with that switch we had to run from thunderstorms twice on Wednesday morning. We spent some time chatting on John’s patio while we waited out thunderstorms. After two false starts we finally headed out around 11:00 and were able to complete about 2/3 of the survey before wind and additional thunderstorms forced us back to John’s.

We found P3, unbanded and their chick LW all doing well on their island in Jones Bay. In this year of few chicks, it’s really great to see the ones that made it. We also found that CA & unbanded have a new nest in Jones Bay. It only had one egg but CA was incubating it so hopefully all will go well there. 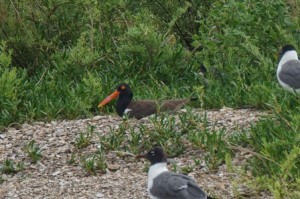 CA was not too happy when we went up to check the nest. 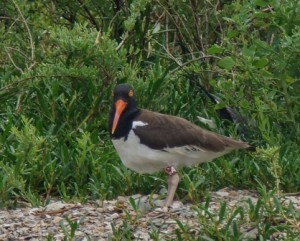 AP & 28’s nest on Marker 52 appeared to have overwashed but they had a nice new scrape so hopefully they will try a third time. None of the other pairs in that area had nests and most were just sleeping the day away in their territories. There are Brown Pelican fledglings everywhere there now which is what usually happens this time of year. Any oystercatchers trying to nest this late in the season have to contend with the possibility of a pelican crushing their eggs. Just one more reason why it’s better for oystercatchers to start early in the season.

There wasn’t anything happening on South Deer island, but we did this beautiful female Red-breasted Merganser sitting on the shoreline. Red-breasted Mergansers don’t breed here and should all be up north this time of year but there always seems to be a few hanging around, mostly females. Makes me wonder if they have some health issue that kept them from migrating but this bird looks pretty healthy. 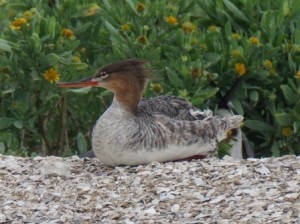 We found YC alone on one of the Sportsman Road docks. YC was banded as a chick on Gangs Bayou Island in West Galveston Bay in May 2014 and has been seen hanging around the area several times this year. YC appears to be a female based on the amount of eye flecks she has. Next year she’ll be old enough to breed so perhaps she’s looking for a mate. 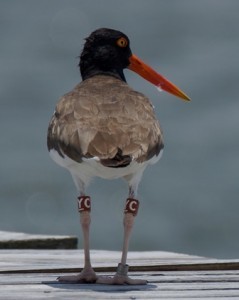 We had a pleasant surprise along the Galveston Island shore north of 8 Mile Road when we found that 15 & 16 have a new nest with two eggs. I took a photo from afar to avoid leaving a scent trail to the nest. This area is prone to mammal predation and I didn’t want to give a predator an opportunity for an easy meal. 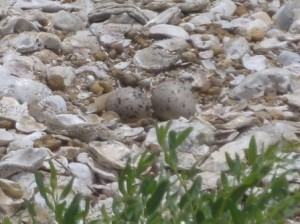 By the time we got to the last two islands in West Galveston Bay the wind has picked up to the point that it wasn’t much fun being out there and another thunderstorm was threatening. We needed to do the colonial waterbird count on both these islands (Jigsaw and Struve Luci) but the boat was rocking too much to count. There are lots of Royal Tern chicks on Jigsaw now. 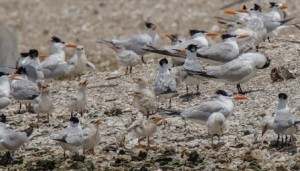 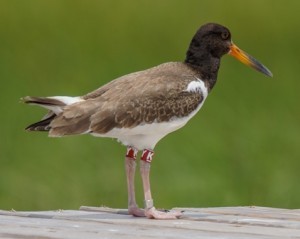 We headed back to John’s house to escape the quickly approaching thunderstorm and decided we’d finish the survey on Monday when the weather report was significantly improved.

Monday morning was beautiful and we headed out to Jigsaw under partly sunny skies, with a moderate north wind. Unusual for June! We counted all the birds for the colonial waterbird survey and noted that the unbanded pair was still incubating their nest.

Unfortunately, the other pair, T5 & T6, were both standing down in the vegetation and I thought briefly that their nest had hatched and they were sheltering a chick but when we approached to get a better look they both walked up on the berm, tucked one leg under them and went to sleep. Not the actions of adults who are protecting a chick. Bummer.

We moved on to Struve Luci and counted there. While Jigsaw is full of Royal Terns chicks, we saw very few Forster’s Tern chicks on Struve and no fledged ones hanging around on the docks. All the birds are having a very hard time this year with the high tides. All the oystercatchers were hanging out on the docks again and Alan got a photo of the other fledged chick there JU. 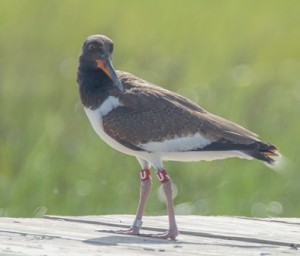 We headed up to Swan Lake to check that area since we weren’t able to get there on Wednesday. On one of the small outcropping islands along the Galveston shoreline we found three fishermen who had pulled their kayaks up. That particular pair of oystercatchers’ nest had failed a while ago and they had not laid a new one. They were not anywhere around and there aren’t any other birds that nest there so the fishermen weren’t hurting anything by being there at this particular time. Because of that we didn’t go up and chat with them, but we did take some photos. One of them apparently didn’t like that and dropped his drawers! I guess he thought he was ruining our photos or something, but we all got quite a good hoot out of it. I’ve had a few run ins with fisherman but never one like this. 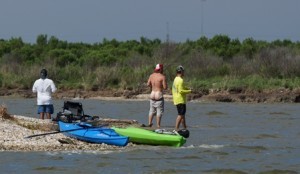 Up in Swan Lake proper, the tide was too high for the oystercatchers yet again and only two pairs were present, both roosting on the rock jetties. The Tricolored Heron chicks are getting big though! 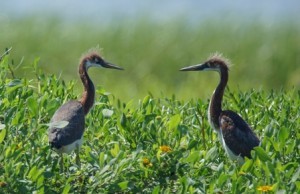 We did a little exploring after that since we didn’t need to check on all the birds. John and Alan had discovered an abandoned barge on Google Earth and they wanted to check it out to see if there were any oystercatchers nesting on it. Stennie Meadours has recently sent us a photo of a pair with a chick on an abandoned concrete ship in Galveston Bay so why not a barge?! We went to check it out but the barge was mostly sunken and it was too far from a good oystercatcher food resource so it’s not likely they would have used it anyway, but you never know. It’s good to check these things out!

On the way back to John’s house, we went to check on CA’s nest, but when we were passing by 28 & AP’s territory, I noticed that one of them looked like it was incubating a nest so we went to check. Sure enough one egg. Woohoo! Bad news for CA though. When we went over there, neither adult was present so the Laughing Gulls must have gotten their egg. Just so we didn’t end the day on a downer we went over to check on P3 & unbanded’s chick LW. It was there with its dad P3 looking pretty dapper. 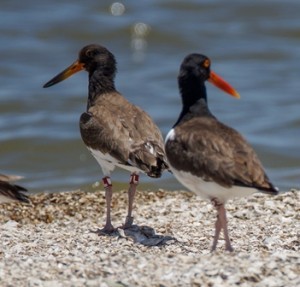 Alan had dubbed this chick Lawrence Welk in one of his FB posts but then Lynn Wright chimed in to say she thought her name was a better fit! I guess we will have to wait until it’s an adult to see if it’s male or female (eye flecks don’t show up until they are an adult). Then we can determine which name is really the right one!

I can’t believe there are only two surveys left this season (June 17 and June 30). Unless of course a chick from one of the remaining nests makes it. If that happens we’ll go out in July to check up on it until it fledges.