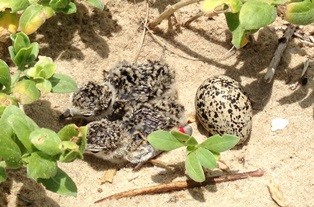 Bryan Beach was pretty quiet until two weeks ago when 3 Wilson’s Plovers breeding pairs got a second wind and laid 3 new nests! It appeared the nesting season was coming to an end at Bryan Beach after I observed Wilson’s Plovers beginning to flock up and the only chick had disappeared. As usual, these Wilson’s Plovers proved me wrong and showed me how tough they are. The 3 nests are in the most highly disturbed area at Bryan Beach, known as “The Big Flats” in field lingo, or what used to be part of the Justin Hurst WMA, but is now owned by the City of Freeport. This is where ATVs and vehicles are regularly mudding and joyriding. 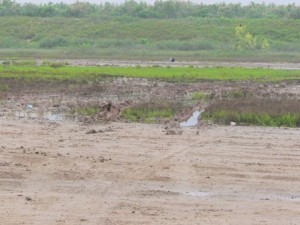 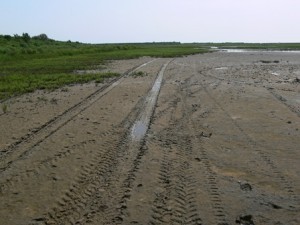 Because the area is so expansive and there many ways to access it, the most effective measure to prevent nest destruction is to erect a protective area around the nest like I have done in the past. Additionally, we worked with the city of Freeport to erect permanent Do Not Enter and Bird Conservation signs in three critical areas at Bryan Beach that provide nesting, foraging, and loafing habitat. 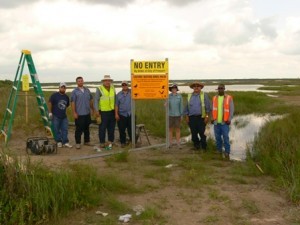 To reinforce protection of these designated areas, we extended our temporary signs and symbolic fencing from the permanent signs. 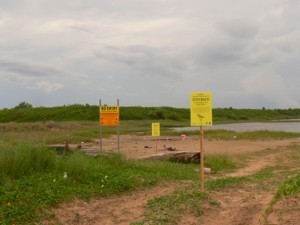 Although, people have respected one of the protected areas, breaking the habits of disturbance at Big Flats is going to be a challenge. Within a week, people shot and tried to push down two of the permanent signs there. 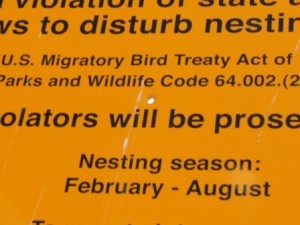 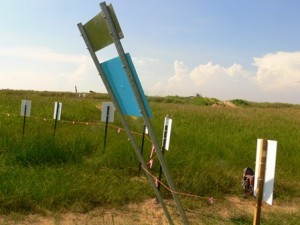 I have also continually expanded the line of temporary posts (39 total) to discourage people from simply going around the protected areas and creating new paths in the vegetation. The picture below shows how vehicles approach the signs, blatantly ignore them, and go around them. Again, because these areas are so expansive and continuous, we would need an unlimitless supply of signs, stakes, and manpower to close off the back beach area entirely at Bryan Beach.

The Wilson’s Plovers chicks are growing up at Matagorda and beginning to look like gangly teenagers! 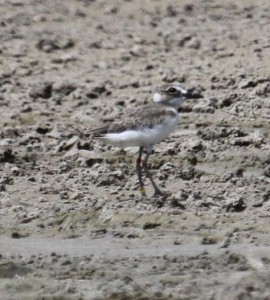 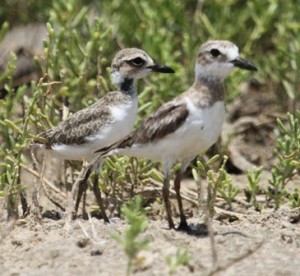 Both of these chicks are almost fledged and the one on the left has color bands. As mentioned in a previous blog, we are using color bands to indicate when and where a chick was hatched. We have banded 21 chicks at Matagorda and are currently monitoring 7 broods. We are also happy to report that the first Wilson’s Plover chick fledged at Matagorda! We knew it had fledged because it simply flew off when we attempted to catch it to band it. We monitor chicks to determine if they survive to fledging (35 days old or capable of flight). With this information we can determine productivity, which is the number of chicks fledged per the number of breeding pairs; and helps ornithologists assess the population status of Wilson’s Plovers.

One of the Least Tern colonies is still hanging on at Matagorda. There are 11 Least Terns nesting and 1 chick! The boat ramp parking lot colony failed soon after Memorial Day weekend because people ignored the signs that were protecting nests. The Least Terns re-colonized the back dunes after the colony failure, but unfortunately it too failed again within two weeks most likely due to coyote predation and human disturbance.

The Black Skimmer colony at Dow has peaked to 1,000 birds and 400 nests! This is their third re-nest attempt after all the flooding in April and May, and I am expecting to observe fluffy chicks next week. There are also 8 Gull-billed Terns and 36 Least Terns nesting and both have several chicks. This past weekend, Dow held their annual Black Skimmer Colony open house, which allows the public to experience the Black Skimmers up close and personal. One hundred people attended the event and they had the opportunity to photograph, observe, and learn about these charismatic birds. 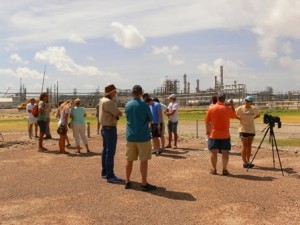 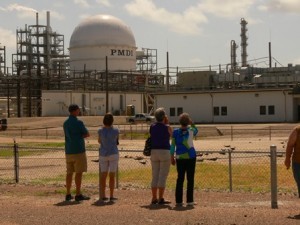 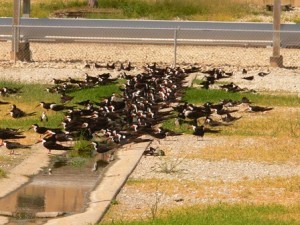