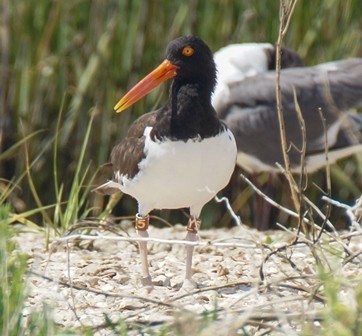 It’s getting hot out there! John Wright escorted Alan Wilde, Rosaleen March, and myself on an oystercatcher tour last Thursday. Most of the birds are done with their nesting activity but we made the entire rounds anyway because it’s fun to see what they are up to and I wanted to make sure there weren’t any more surprise nests. P3, unbanded, and their chick LW (still can’t tell whether its Lynn Wright or Lawrence Welk) were hanging out on their island but when we approached all the young Brown Pelicans that were hanging out there flushed and the oystercatchers went with them. They flew in a circle, yelling at us their displeasure and landed again from where they had taken off from. Since there are so few chicks this year, it always does our hearts good to see the ones that made it. 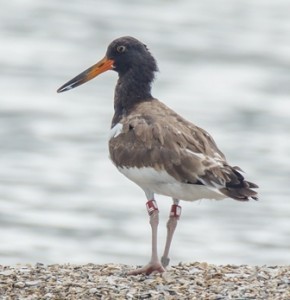 Nothing else was happening in Jones Bay. It was raining down by Harbor Walk so we checked out Marker 52 and North Deer first. There are young Brown Pelicans everywhere now and they are quite the nuisance. They flush when you get close causing everything else to flush and the oystercatchers are often hidden behind them or partially hidden making it difficult to read bands. It’s hard to believe that Brown Pelicans were endangered just 30 years ago. Today they are way too numerous! 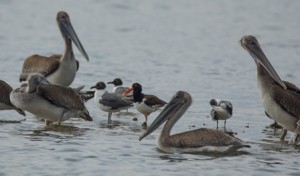 Anyway, all the oystercatcher pairs on Marker 52 were present but they were all just sleeping or loafing. I guess there isn’t much to do when you have a full belly and you’re done trying to nest. We didn’t see any oystercatchers on North Deer. The rain had stopped by then so we headed down to Harbor Walk. The water was like glass on the way there because the wind was so slight. You don’t see that very often out there! The pair at Harbor Walk, ET & unbanded had a nest last time we were out but this time there was no sign of it. The unbanded bird was hanging out on a beachy area nearby but there was no sign of ET. The tide has gone down a lot so I suspect he was off foraging somewhere. The nest was not old enough to have hatched so it must have failed for some reason. It could have overwashed since its right along the GIWW or it could have been found by a predator. It is a short swim across the GIWW for a coyote or a raccoon and I’m sure there are plenty of them around Harbor Walk.

Since we’d already checked out Marker 52 and North Deer we took the southern route to South Deer directly across the bay. I haven’t been that way in a while and making a straight shot across the open water when the tide is down always makes me nervous. I have a good idea where the reefs are but sometimes I miscalculate you know. We made it just fine though. We found that L4 & unbanded were still incubating their one egg nest. The unbanded bird was incubating we decided to try to trap it with the box trap. I don’t think I’ve ever trapped an adult this late in the season but there’s always a first time. I set it up and we went to move the boat away so the bird would go back to the nest. Before we got very far it walked right up, walked in, and tripped the trap. Awesome! That was probably the fastest trap ever. It was a male and we banded it HL. I think I’ll call him Hal! 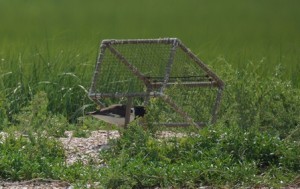 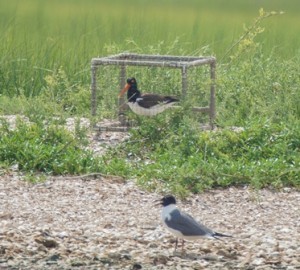 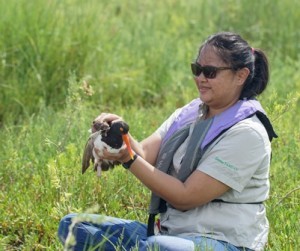 We moved on to check on 13 & unbanded’s nest but on the way we spotted Y5 hanging out along the shoreline. I banded Y5 as a chick in Swan Lake (north of the I-45 bridge) in May 2011. We’ve seen it hanging around in West Galveston Bay a lot but to my knowledge it has never nested. From the look of the eye, it appears to be a male so perhaps it’s looking to set up a territory somewhere on South Deer. 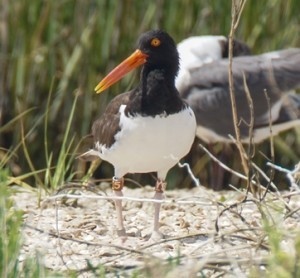 We found 13 & unbanded still incubating their nest. I’m pretty sure it has three eggs now but I just looked with binoculars from the bow of the boat to minimize disturbance to them and the other birds there. In fact they were just shading the eggs rather than incubating them since it was so hot. I’m not sure how these birds can take the heat just sitting there over their eggs. They are tough! There wasn’t anything else interesting happening on South Deer and we didn’t find any birds on the Sportsman Road docks either. Gangs Bayou was equally unexciting with all three pairs of birds sleeping the day away. We headed up to check on 15 & 16, the pair that nests on Galveston Island just north of 8 Mile Road. They were also sleeping the day away. Not far from them we found some folks doing some fishing. Not unusual, but they had kayaked out there and they had a large cooler, two beach chairs, and a beach umbrella in addition to their fishing gear with them. Even Alan was impressed that they were able to carry so much stuff on their kayaks!

Then we headed to Jigsaw. This is where the unbanded pair had three chicks last time we were out and we weren’t sure what was going on with the banded pair (T5 & T6). When we arrived, the unbanded pair was standing up on the island ridge and T5 & T6 were standing down by the water’s edge. We approached slowly and T5 & T6 showed no reaction. They just walked off so I knew they didn’t have a chick after all. 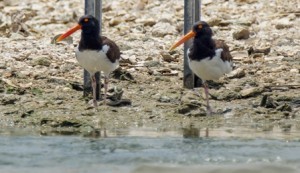 The unbanded pair remained alert but we didn’t see any chicks. This pair really has my number. I’ve tried to catch them to band them any number of times and they are having none of it so I knew they’d be really sneaky with their chicks too. I checked out the area and didn’t find any chicks and they just flew off to the reef but they kept giving me the evil eye so I suspected something was up. 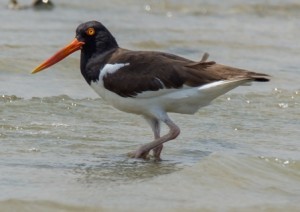 We decided to go finish our rounds and then come back and spy on them from afar. A lot of the Royal Tern chicks there have fledged and Alan got a great photo showing their interesting plumage. 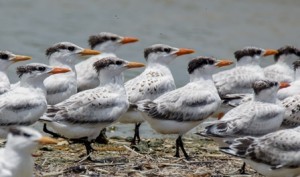 We headed over to Struve Luci and found three of the adult pairs but neither of the fledged chicks. These chicks are pretty old at this point so they were probably off having some teenage freedom from their parents for a change. I can’t tell what’s happening with the skimmers there. There aren’t any chicks but some of them look like they might still be trying to nest. It’s been a bad year for them too.

We went up to Swan Lake and checked on all the birds there. On the way we checked out the new breakwater project that the good folks at Scenic Galveston raised the money for. The breakwaters are to stop the shoreline erosion there. It was pretty interesting watching them work. There were two big cranes dumping huge rocks in the water and three guys in the water directing them. They seemed like they knew what they were doing! 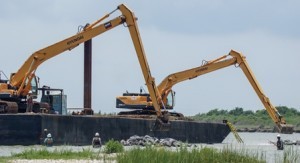 Turns out all the birds in Swan Lake were hanging out on the breakwaters there. No further nesting activity at all. No surprise chicks either. Last year about this time we discovered that one of the pairs whose nest we thought had failed had actually fledged a chick because we saw the family on one of the breakwaters. No such luck this year. We headed back down to West Galveston Bay and approached Jigsaw again. At first we were pretty far away and it was hard to see. One of the unbanded adults was up on the island ridge and I thought I saw something small walk in front of it but I couldn’t be sure. We got a little closer and all of us had our binoculars trained on that bird. Suddenly a chick walked right in front of it! Woohoo! So we know they have at least one chick still and I suspect there might be two. Next time out, July 15th, we will band them if they make it. I sure hope they do!