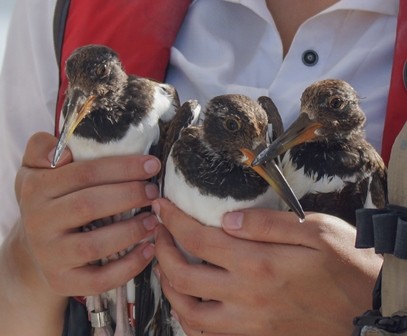 Surprise, surprise, surprise! I love late season surprises and we got a big one on Friday. Brittany Stamps, our GCBO summer intern, and I met John Wright and Alan Wilde at John’s house to do another oystercatcher survey. We usually end our surveys in June but this year there were still two pairs incubating nests and one pair with chicks on June 30th so we decided to do a few more surveys to see what the outcome of those nests will be. We headed straight for Jigsaw Island in West Galveston Bay because the chicks there are at least 30 days old and needed to be banded before they could fly (35-40 days). When we arrived we saw an adult sleeping up on the island ridge but we couldn’t tell much else. We thought we saw a chick but we weren’t sure so we went around to the other side of the island. From there we definitely saw two chicks so we went back around to where we started because that’s the only way to approach this island that is almost surrounded by reefs. John motored us up as close as he could get and Brittany and I jumped off the boat with dip nets to chase down the chicks. There is a definite art to chasing down oystercatcher chicks. They can swim and they can dive so if they get in the water, it’s all over as far as catching them. The goal is to approach them from a direction where they have lots of room to run so they do that instead of heading for the water. That gives us time to catch up to  them. With this island though there’s only one way to approach so we had to go for it and hope for the best. Brittany and I ran as fast as we could and lo and behold we discovered three chicks were running from us not two! Wow. One of them headed for the water but I was ready for it with the net and was able to scoop it up just as it leapt into the water. Fortunately, the other two chose to hide in the vegetation. Brittany found one and then we were left searching for the other one. John and Alan had seen where it had gone and were able to direct us to it. So we got all three without much problem. They were all in fine shape and the biggest one’s primary feathers were all the way grown in. I’m surprised it couldn’t fly already. It surely will be able to in the next few days. The biggest one became LX, the middle one is U1X, and the smallest is LU. LX and LU were the last chick bands I had with two character codes so now all the chicks will have three digit codes. I have about 20 two character combos left for adults and then they too will start being three characters. I don’t much like it because the codes are smaller and they will be harder to read but there’s nothing I can do about that! 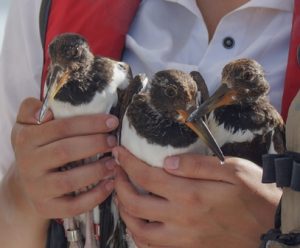 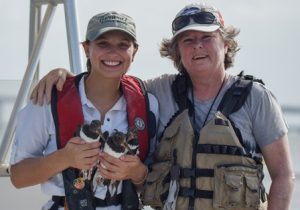 I can’t express how happy we all were that there were three chicks! It is a very difficult feat for an oystercatcher pair to raise three chicks. They have to protect them from the Laughing Gulls and keep them fed til they can feed themselves which takes a couple of months. It’s just a huge job so kudos to the unbanded pair on Jigsaw. They’ve done a marvelous job so far. Why are they unbanded? Well, basically, they are smarter than me. I’ve tried to catch them any number of times and they are just having none of my shenanigans so I gave up. They’ve been through the whole getting their chicks banded scenario a couple of times before so they both just stood there giving us the evil eye while we had their chicks. The chicks were all pretty calm too. As soon as we let them go, the adults went right back to them.

We couldn’t top that experience the rest of the day but we did have a few more surprises. Lalise Mason, the Executive Director of Scenic Galveston, had asked us to check for oystercatchers on the new breakwater they are putting in just north of the I-45 bridge to stop erosion of the shoreline there. She’s hoping they can add some crushed rock or shell to encourage nesting when the project is done so we headed up there to check it out. We found four oystercatchers hanging out on the breakwater having a good old time. One of them was XU, a bird we banded as a chick in April 2014 in West Galveston Bay. It’s been seen a lot up at Rollover Pass but most recently we saw it on the Sportsman Road docks last March. Perhaps it is scouting out a nesting location since it will be old enough to breed next year.

From there we made the regular rounds beginning at Struve Luci which is back in West Galveston Bay. All four oystercatcher pairs were there but the two fledged chicks were not. They weren’t there the last we were out either so it appears they have struck out on their own. They spent about 3 months with their parents since they fledged so it was time for them to leave. Now the adults can rest until next year when they will start all over again. The Black Skimmers on that island have really struggled this year so I was happy to see some chicks! 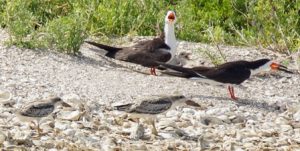 No more surprises until we got to South Deer. There are a bunch of unbanded birds there so sometimes it’s hard to keep it straight what’s happening but in the territory where CE & unbanded were supposed to be, there was instead Y7 & unbanded. CE hasn’t been around much this season so perhaps Y7 is taking his place. 13 & unbanded were incubating three eggs last time we were out and it was time for that nest to hatch so I wasn’t surprised to see nobody up where the nest was. 13 was standing along the shoreline acting like nothing was going on. That wasn’t surprising. These oystercatchers are pretty sneaky. 13 & his unbanded mate snuck a chick by us last year! We didn’t see the mate anywhere though so I went up and walked the shoreline in both directions thinking she was up there hiding the chicks somewhere. I did not see her so I don’t know what’s happening there. We have to go back out at the end of the month to make sure the Jigsaw chicks fledged ok, so we can check on 13 again and see if maybe they had some chicks hidden somewhere. Next we found YK hanging out on a shelly area that is unclaimed. Is it claiming a territory? We won’t know until next year. YK is a pretty special bird because it’s the only third generation oystercatcher in the banded population. YK’s father was banded as a chick in May 2011 in West Galveston Bay and YK was banded as a chick in June 2014 just north of the I-45 bridge. Pretty neat! 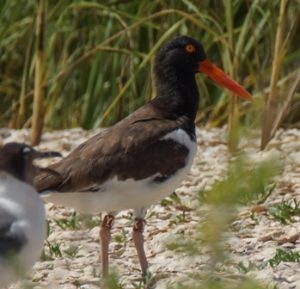 The last pair on South Deer, HL & L4, had also had a nest the last time we were out. The nest only had one egg and there were Laughing Gulls all around so I didn’t give it much chance but lo and behold, we discovered them with a small chick! They were chasing gulls away and the chick ran up into the veg before Alan could get a photo. We left them be so we wouldn’t put the chick at risk from the gulls. Hopefully it will do ok and we can get some photos at the end of July

On North Deer we found FR where JR is supposed to be. Maybe FR has moved over from Jones Bay? If so he didn’t take his mate Y2 with him. Time will tell. On the way down to Harbor Walk we found a flock of six or seven birds hanging out on a reef. Alan got enough photos of the banded birds for us to determine that they were XA and XC, siblings banded as chicks in April 2013, KR banded as chick May 2014, and 23 a bird banded as an adult that nests nearby. It’s really nice to see these birds we banded as chicks. XA, XC, and KR aren’t breeding anywhere that we know of so we don’t know if they are waiting for a territory to open up or if they are breeding somewhere that we aren’t surveying but it sure is good to see that they are still alive and doing well. Here’s a photo of KR when it was banded and one from Friday as an adult. 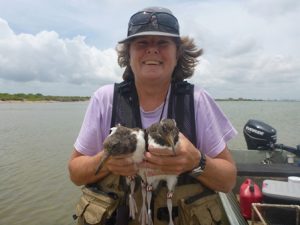 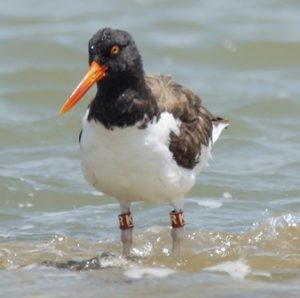 On another reef we found YY, one of the chicks from last year. Looks like it’s in fine shape. 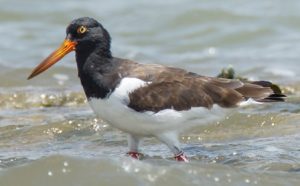 We checked the Tiki Spoil island and found a couple Gull-billed Tern chicks. 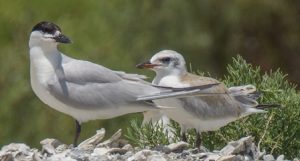 Then we stopped in to check on P3, unbanded, and their fledged chick LW. They were all doing fine and voiced their displeasure at our voyeurism by calling and flying away. It’s always a thrill to see a chick fly! The last surprise of the day was that we found Y5 with Y2 on the island that we previously FR’s. Y5 was banded a chick in May 2011 and we’ve seen it a couple times each season but never on a breeding territory. Perhaps it will be with Y2 next year since it looks like FR has moved over to North Deer. You just never know what these oystercatchers are going to do! 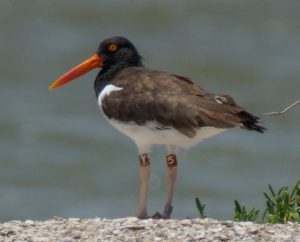 Just to let you know you aren’t the only one who has bad hair days, here’s an oystercatcher having one. 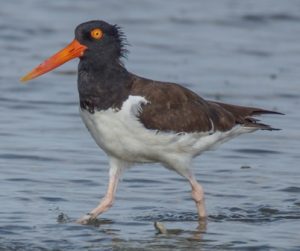 This project is supported by Audubon Texas, the Hershey Foundation and several private donors. If you would like to contribute you can do so by clicking on the Donate Now button below. All donations are tax deductible and GREATLY appreciated.