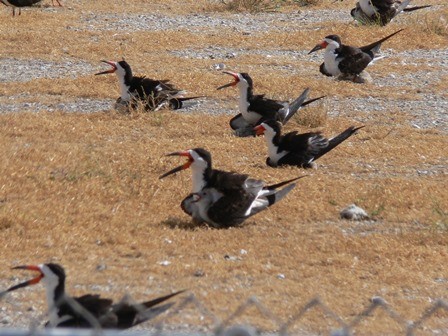 Even though it’s getting late in the season, the birds are still getting down and dirty in the hot, dry Texas summer. Least Terns, Black Skimmers, and Wilson’s Plovers are pretty rowdy at yet another chickpalooza happening in Freeport and Matagorda. The Least Tern colony at Matagorda is hopping with near fledged and two downy chicks (pictured below). 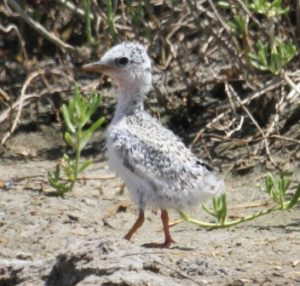 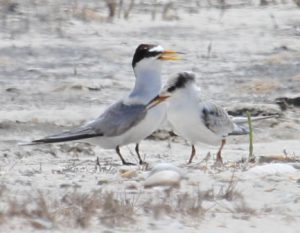 The few remaining Least Terns at Matagorda have held strong; and I hope they can rally through the dry conditions and the last three nests hatch. Now, I know you’re thinking, “that doesn’t sound like much of a party to me,” but considering their rocky season, these Least Terns can party with the best of them. Due to the dry conditions, these party animals arrived to nest at Bryan Beach only about two weeks ago! I have only documented Least Terns loafing and exhibiting courtship at Bryan Beach thus far, so I was sort of scratching my head when it appeared they were scoping out the dried up mud flats at the Big Flats. I thought, “wow it is way too late in the season and these birds are nuts to start nesting now.” Well as I mentioned last time, the birds always make a fool of me! There are eight adults and five nests at the Big Flats, and pictured below are two nests where Least Terns decided to accessorize their nests with litter. 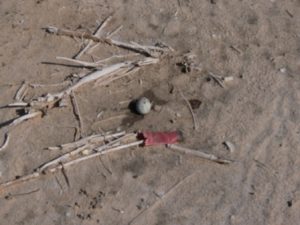 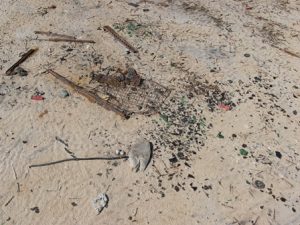 As you remember from previous blogs, the Big Flats is subjected to human tomfoolery; and although I totally support the birds on their breeding quest, part of me was hoping the Least Terns would not initiate nesting here. Although we have posted and blocked “roads” into the Big Flats, it hasn’t stopped people from entering; and the Least Terns were nesting precisely in the area where ATVS and trucks like to joy ride. Because of the expansive area and how spaced the nests are, it was not possible to protect the entire area. Instead, I have protected individual nests just like I did for Wilson’s Plovers at Bryan Beach. Luckily, human disturbance has decreased since posting the Big Flats and the current nests are due to hatch soon.

The chickapalooza mosh pit is bouncing around at the Dow Black Skimmer colony. Many of the nests have hatched and I counted 138 chicks this week that range from downy to near fledged. Pictured below is an adult with its feathered chick near the local watering hole. 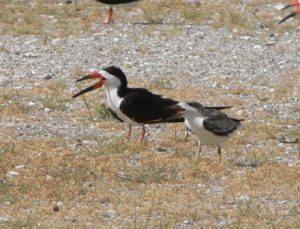 Because the Texas summer is in full swing, many of the chicks are vying for a shaded spot. Pictured below are several Black Skimmer adults brooding their chicks. 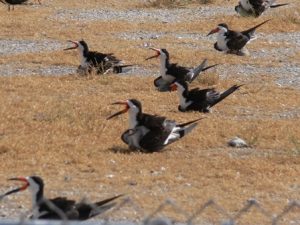 The last remaining Wilson’s Plovers are keeping the breeding shenanigans up at both sites. All three nests found late in the season at the Big Flats hatched. Currently, two broods are still alive! Pictured below are two chicks that hatched only hours before from a nest that was protected at the Big Flats. I am anxious to see if they survive the dry conditions too. 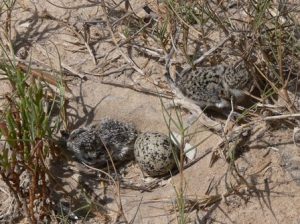 I was pleasantly surprised when I spotted a chick less than a week old in another nesting area at Bryan Beach. It appeared the Wilson’s Plovers had given up nesting in this area and I was only observing loafing birds during surveys. As I went to document the species using the area, I spooked the adult male and chick foraging around the lagoon. Because of my honed chick sprinting abilities, I was able to scoop up the sneaky chick and band it. The pair must have been nesting somewhere in the back dunes.

Over the last month, we have documented four Wilson’s Plover fledglings! Pictured below is a fledgling that belonged to the banded adult male, ML. 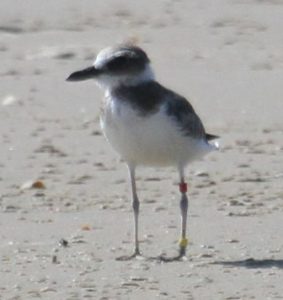 Also, the last two nests at the Matagorda site have hatched for a total of four downy chicks. As usual, the Wilson’s Plovers tricked us when we thought one of the nests was abandoned because the adults were neither around or reacting during previous nest checks. Many adults have left the study area over the last month, now that the breeding season is ending. Because many of the adults are banded, we have begun surveying north along Matagorda Beach in hopes of resighting them. Unfortunately, we have not resighted banded adults outside of the study area and are beginning to wonder where they could be. Much of the inland salt marsh is drying up and the area south of the park where they could possibly be is inaccessible. We will continue to conduct surveys in the park and northward through August to document flock numbers and hopefully some banded birds.

Although we didn’t see banded adults along Matagorda Beach, we documented new nesting areas occupied by five Wilson’s Plovers breeding pairs! As we drove between mile four and mile seven from the beach access road, downy plover chicks were popping up from the wrack near the water line! We honed in our chick sprinting abilities and managed to catch and band seven downy chicks (two pictured below). 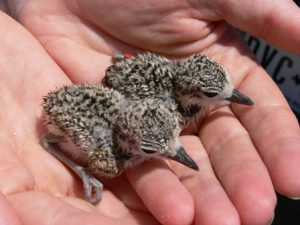 Because the chicks were so young and around the same age, we hypothesized these pairs must have synchronously re-nested after a storm or predation event in June. This nesting habitat is a bit different than that in the park too. We assume they are nesting in the sand flats at the base of the main dune line and utilizing the beach water line as food/water resource instead of the ephemeral wetlands and algal flats like those in the park. We predicted birds were nesting along Matagorda Beach but we weren’t able to survey because of time constraints and needing a 4WD vehicle. Because it as an important nesting area, we plan to monitor the area regularly next season with help from volunteers and hopefully a work truck that is contingent on funding.