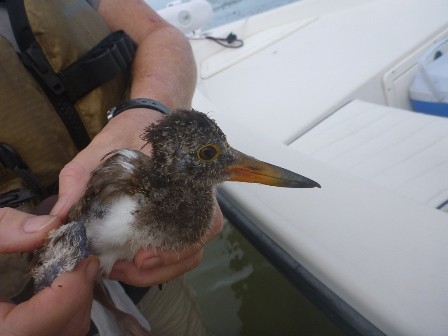 Well it’s all over folks. The season came to an end today. John Wright, Alan Wilde, Amanda Anderson and I went out today to check on the last remaining chick. We headed straight for South Deer Island to get the business over with first so we could relax for the rest of the survey. The good news was that the chick was still alive. The bad news was that it was way undersized and had no primary feathers growing in on its wings. 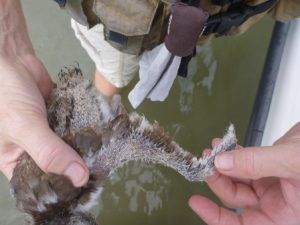 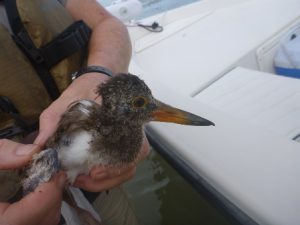 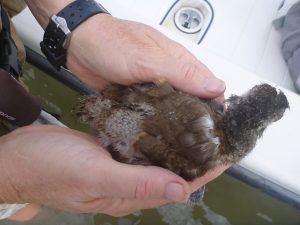 Based on its age, this chick should be able to fly within days so something is clearly wrong. This is the second time we’ve had a chick with this problem in this area so I decided to take it to a rehabber so they could figure what is going on. We left it there for the time being and continued with the survey. Here’s the afflicted chick’s parents ever vigilant even though their chick is not thriving. 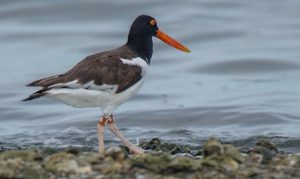 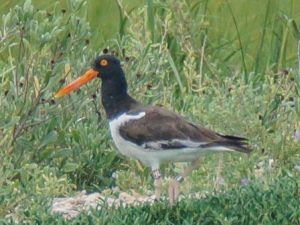 There wasn’t much happening on South Deer. We saw only one other pair of oystercatchers there. 15 & 16 were hanging out on one of their reefs along Galveston Island.

We headed to Jigsaw to check on the chicks that had fledged the last time we were out. Unfortunately they were gone too! I suspect the adults had them off somewhere feeding. We discovered an abandoned boat. I wonder what happened to its operator? 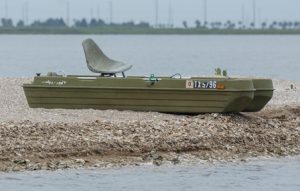 There were three unbanded birds hanging out there. They flew over to T5 & T6’s territory which caused them to run down the reef in defense but then they all just stood around looking at each other. It is amazing how these birds can be mortal enemies during the breeding season and then become the best of friends again come late summer.

Over on Struve Luci we saw some cute Black Skimmer chicks and a few oystercatchers. 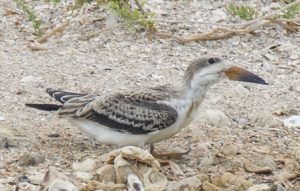 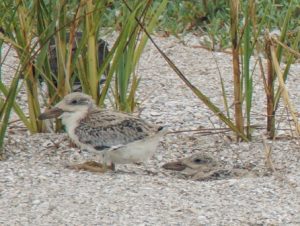 We thought we wouldn’t be able to go under the I-45 bridge because John and Alan had heard that it was closed to clear some debris so we headed back down to North Deer and Marker 52. We found the usual suspects there all spread out and doing their oystercatcher thing. JJ obviously wasn’t very happy about our intrusion into his daily rituals. 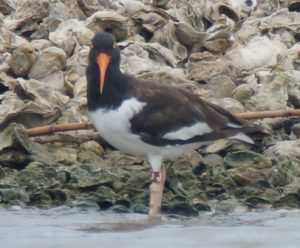 JJ Watt – are you paying attention?! You have an oystercatcher named after you!

We noticed that a barge had come under the I-45 bridge so we headed back up there to check the new breakwaters for oystercatchers but there weren’t any hanging out there. So we headed back to South Deer and collected the chick. We held it in a hat until we got back to John’s where he provided a box for transport. 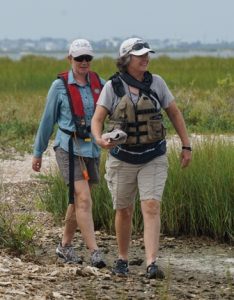 When I got back to Brazoria County, I took it to my rehabber friend, Dana Simon, at Gulf Coast Wildlife Rescue (donations appreciated!). She said it either has heavy metal poisoning or West Nile Virus. Alan did some research and found that we can get the blood tested at the Texas A&M vet school for a small fee so I’m going to send it off and see what they say.

So another season comes to an end. The total productivity in West Galveston Bay is 6 fledged chicks divided by 24 breeding pairs which equals 0.25 meaning 25% of breeding pairs fledged a chick. That is the second lowest productivity of the six years of the study. I will have to gather together the data for the other areas that were monitored to determine productivity for them. There were no chicks fledged from the Texas City Prairie Preserve or Swan Lake. I wasn’t able to monitor Bastrop, Drum, and East Matagorda Bays. Bob Friedrichs was monitoring Tres Palacios and Lavaca Bays and I believe he only had one fledged chick. Alan and Brigid Berger were monitoring the area around Port O’Connor which includes part of Matagorda Bay and most of Espiritu Santo Bay. I believe they had two fledged chicks in Matagorda Bay and none in Espiritu Santo. Overall not a stellar year for the oystercatchers. The high tides of the last two years really did a number on productivity. Here’s hoping next year is better!

This project is supported by the Hershey Foundation and several private donors. If you would like to contribute you can do so by clicking on the Donate Now button below. All donations are tax deductible and GREATLY appreciated.