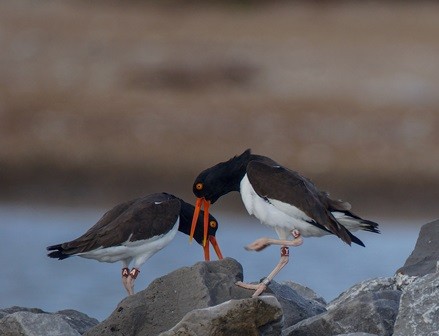 Believe it or not, it’s time to start monitoring the American Oystercatchers for nesting activity. This year we’ll be monitoring the birds in West Galveston Bay and East Matagorda Bay once a week. We’ll be putting nanotags on 10 adults and 5 chicks so we can track their movements using our new Motus tower network. This project is supported by a grant from the National Fish and Wildlife Foundation and we are very happy to be able to monitor the birds on a more regular basis this year. 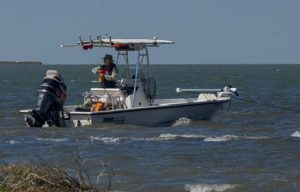 We checked out all the nesting territories in the east end of West Galveston Bay, Jones Bay, Swan Lake and Galveston Bay just north of the I-45 bridge. While checking the pairs at the Tiki Island boat ramp (we found only one), we came across this scene. 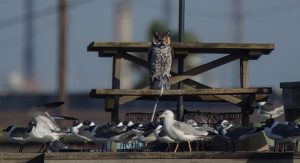 I don’t think that plastic owl is having the intended effect!

Our first bit of excitement came when we checked the new breakwaters along the Galveston Bay shore running from Virginia Point up towards Swan Lake. This was a Scenic Galveston project to alleviate erosion along the shoreline. The Galveston Bay Area Master Naturalists, led by Alan Wilde, decided to try an experiment by creating some oystercatcher nesting habitat in several spots on the breakwater. They brought in shell by kayak and filled in between the large rocks to create some shell pads just perfect for oystercatchers. We had no idea if the oystercatchers would take to this “habitat” but what was there to lose except a little time and energy? You can just see the pad up on top of the large rocks that the breakwater is made from.

Well, we found a pair, YK and YA, both birds banded as chicks in 2014, vigorously defending one of the shell pads and chasing off another bird that was trying to colonize a second shell pad. What a great success! 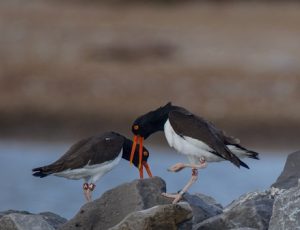 They did not appear to have a nest but you can bet the master naturalists will be keeping an eye on this pair. Fittingly, YA is the bird I refer to as Alan’s chick. She is the chick of H0 and JC, a pair that nest in West Galveston Bay very near Alan’s house on Tiki Island. He watched her grow up and she is part of the reason he is so enamored with oystercatchers now. How fitting that three years later she would colonize the habitat created by Alan and his crew. 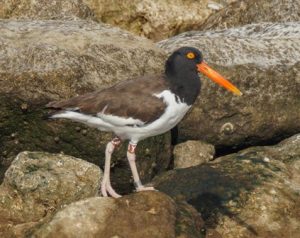 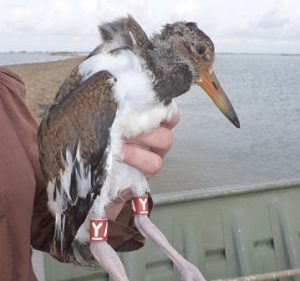 We checked out the rest of the breakwater and found another pair but they were behind the rocks and we couldn’t see who they were. Up in Swan Lake we found our first nest belonging to K7 and unbanded. As you can see they welcomed us with open wings. 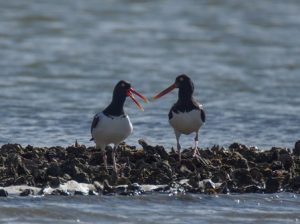 Here’s their lovely nest. I told them to get busy and lay some more eggs. Time’s a wasting. 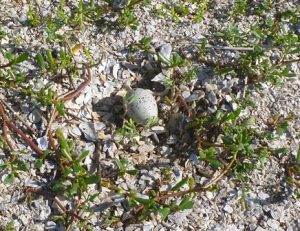 We headed back down to West Galveston Bay and checked out Struve Luci Island. There are four pairs there and they usually nest early so I was expecting to find some nests, but I wasn’t expecting what we found. I found a nest for the pair on the north end and Amanda found a nest for the pair on the south end but the two middle pairs, the pairs that usually nest the earliest had no nests. I did find a scrape with what appeared to be a dead chick in it which wasn’t making any sense and I just didn’t put two and two together. On the way back to the boat, I searched again more carefully in those pairs territories and lo and behold, I found a live chick! Holy cow! 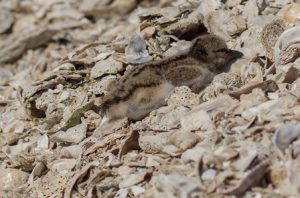 It looks dead in the photo but it isn’t. It is just laying down as low to the substrate as possible hoping not to be found. That is standard procedure for a chick this small. We estimated the chick to be about a week old so they must have laid their eggs around January 17th. We looked around but found no other chicks. That’s when it finally hit me that the other middle pair, the one with the scrape with the dead chick, probably had some live chicks too. They were expressing great displeasure at our presence when we arrived which is why we thought they had a nest. Here’s the male giving us the evil eye. 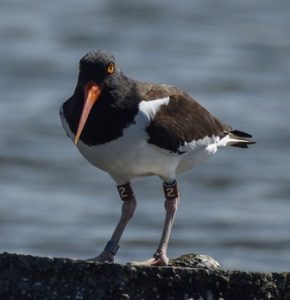 We decided we’d better leave them alone. We’ll check for additional chicks next time or spy on them from shore to verify. We made our way around the rest of the bay. Many of the pairs were absent and others were sleeping along the shoreline. It’s almost like the rest of the birds in the bay didn’t get the memo that it’s nesting season. We found lots of shorebirds on reefs, the docks along Sportman Road and on the new breakwater that is south of Sportsman Road on Galveston Island. TPWD created this breakwater and they did a fantastic job creating some sandy habitat behind it that the birds just love. I’ll be excited to see it develop over time. 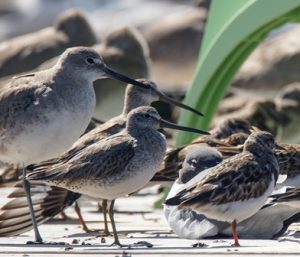 We did find one more nest, this one in Jones Bay. It belongs to superstars P3 and unbanded. They always nest early too and have fledged three chicks more than once which for an oystercatcher pair is a LOT of work. They only had two eggs but I expect they will lay another one. We tried to trap the unbanded bird in the box and it looked like she was going to go in until P3 flew over and warned her off. After that she flew off to a reef and P3 stood along the water’s edge. I’m sure if he could have stuck his tongue out at us he would have. We tried to trap this unbanded bird in the box once before and ended up trapping P3 instead. After that experience I guess he’s had enough of that box. I have a new trap this year, a bow net and we just might try it on this nest the next time out. 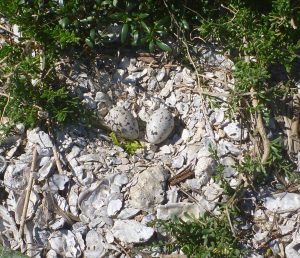 Several people have asked me about the Adopt-an-Oystercatcher program and I’m happy to announce that it is up and running. We still aren’t sure about some of the pairs but I’ve done my best to put active pairs on the site for people to adopt. If you aren’t familiar with that program – you can adopt a pair of oystercatchers for a $100 donation and I will update you monthly on their progress throughout the breeding season. Most pairs are from West Galveston Bay, but there is a pair from Dickinson Bay and a pair from Swan Lake too. Once I get out to East Matagorda Bay, I will add some from there.