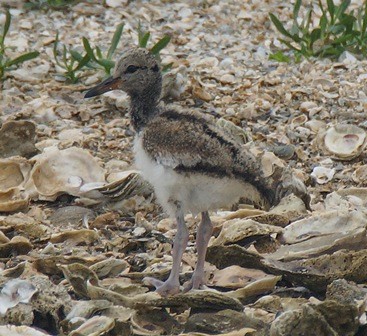 On Monday, GCBO shorebird technician Amanda Anderson, Cradle of Texas Master Naturalist Oron Atkins, and I headed out to East Matagorda Bay to check on the pairs there. The good folks at the Texas Mid-Coast National Wildlife Refuge are letting us use their boat for this monitoring and for that we thank them very much! To monitor East Matagorda Bay we leave from the boat ramp at Sargent and take a 20 minute ride down the GIWW to the Chinquapin area where the first of the oystercatcher pairs are. We make a circle around the bay beginning there, heading out to Dressing Point, west along the far shore to an area known as the Oyster Farm and then back across the bay to Old Gulf Cut and back east on the GIWW to the boat ramp. Here’s a map of our route. 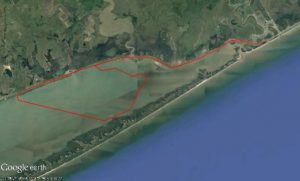 We found nine pairs present and four new nests! One nest was on an island along the GIWW where a pair has nested for a long time. This island has eroded so much though that it will take a year with incredibly good weather for them to be successful. We also found a pair consisting of YC and an unbanded bird.

YC was banded as a chick by Amanda and I in 2014 on an island in West Galveston Bay. This is the first time a bird banded as a chick has turned up in the breeding population in East Matagorda Bay. That is strange because there are 11 birds banded as chicks in the breeding population in West Galveston Bay. But of course there are four times as many pairs there too. My only guess as to why is that the habitat in East Matagorda Bay is not as good and it’s getting worse all the time. The erosion there is incredible and most of the small islands that oystercatchers prefer are turning into reefs.

We went by Dressing Point, the only large colonial waterbird island in East Matagorda Bay. Most of the birds haven’t started nesting yet but the Great Blue Herons were already setting up shop in the cactus in the middle of the island. There were lots of American White Pelicans there. They will head north before the other birds get around to nesting. 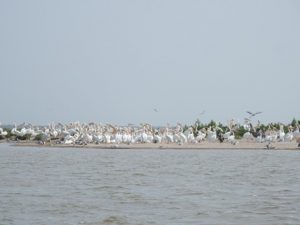 We set up the new bow net on one of the nests at the Oyster Farm and caught a male. 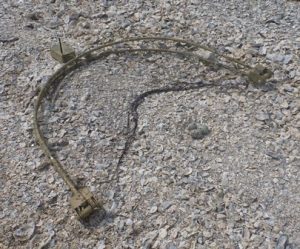 We banded him KM and let him get back to his incubation duties. 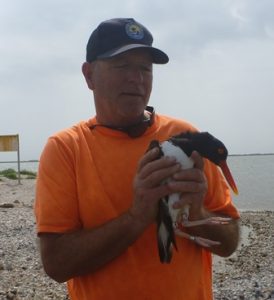 On Wednesday, Amanda and I went back to West Galveston Bay with John Wright and Alan Wilde. We made the rounds same as last week. We went to Struve Luci island, the one with two nests and two pairs with chicks first off. We found that one of the nests had already failed. That pair nests in the middle of a Laughing Gull colony and unfortunately the gulls have returned early this year. I suspect they are the culprit for the failed nest. Alan got a great photo of the older of the chicks. 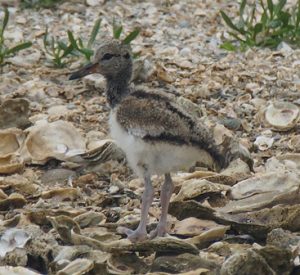 Isn’t just the cutest thing you’ve ever seen! We were able to confirm that the other pair does indeed have a chick that is a little smaller than the one in the photo above. It ran over the ridge to quickly for a photo. The other nest was still being incubated so we went on our way. 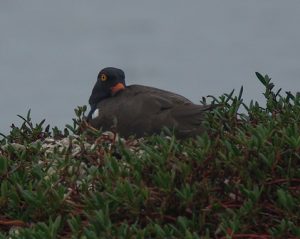 The pair of three year olds, YK and YA, were still defending the shell pad on the breakwater but they did not appear to have a nest. We tried to trap a bird in Swan Lake with the bow net but that pair was having none of our shenanigans and wouldn’t go near the nest after we set up the bow so abandoned that attempt. 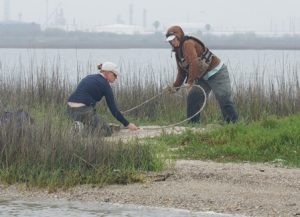 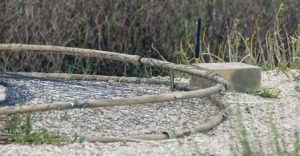 Back down in West Galveston Bay, we discovered a new nest on Jigsaw Island belonging to T5 & T6. We banded this pair way back in 2011 and they have remained faithful to each other through the years despite many failed nesting attempts. They also nest in a Laughing Gull colony and the only time they’ve come close to fledging a chick was when a large group of Royal Terns decided to nest in the area and ousted the gulls. The gulls haven’t returned to this island yet so maybe they’ll be able to hatch a chick before that happens. Something weird was going on there too. A third bird, X7 was hanging around and walked right by T5 and T6 on the reef and they did not make any attempt to chase it away. This time of year, an interloper like that is usually met with much displaying, name calling, and chasing.

X7 flew over to the next pair’s territory while we were there and they eventually chased it off to another part of the island. That pair has remained unbanded through the years because I’ve been unable to catch them but we discovered on this day that YE has taken the place of one of unbanded birds. YE was banded as a chick in 2014 on Struve Luci and is the chick of K6 and JA, the superstars that have one of the early chicks this year.

We found only unbanded birds on the docks along Sportsman Road but when we went through the cut in Confederate reef, Amanda noticed an oystercatcher feeding there so we went to check it out. And then we saw another one and another and another. In all there were nine oystercatchers strung out along the reef. Among them we found three banded birds. XA, a Struve Luci chick from 2013, LU one of the last chicks to fledge last year, and E7, an adult that has held a territory but not made a nest the last several years. 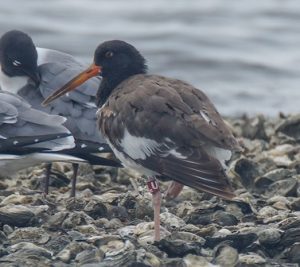 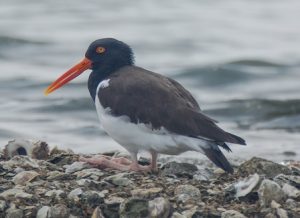 That doesn’t look very comfortable to me but they do that fairly regularly so it can’t be that bad. And in actuality this bird is sitting on its feet. In birds the joint that most people think of as the knee is actually the ankle joint. Ever wonder why is bends backwards? That’s why. It isn’t the knee at all. Birds knees are hidden up close to the body and the foot bones are elongated below the ankle to form the bottom part of what we think of as the leg.

We didn’t find any more nests and P3 was incubating the nest in Jones Bay so we couldn’t try to catch his unbanded mate on the nest. Another survey complete!

On Friday, Bob and Ruth Friedrichs took me out on their boat to Tres Palacios Bay and a small section of Matagorda Bay. We were joined by Mid-Coast Master Naturalist Robyn Savage. Bob is monitoring the birds nesting in this bay and we wanted to see if we could band a few more of them. Unfortunately it was cold and windy and I had to drag the waders back out. We found three pairs with nests in Tres Palacios Bay and two pairs in Matagorda Bay near Oyster Lake with nests. The birds are really getting after it this year! We caught two birds in Tres Palacios Bay but one of them was already banded. We put bands HT on the unbanded one and I put a nanotag on it. Hopefully the Motus antennas on Bob and Ruth’s house will pick up the signal and we’ll learn more about how this bird moves around the coast. 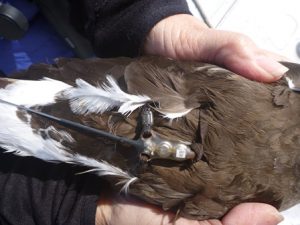 We caught a bird on one of the nests in Matagorda Bay too and banded that one HP. I also put a nanotag on that one. It should get picked up by the antennas at Bob and Ruth’s house too. On the way back to the boat ramp we went by the island where HT has a nest to check and make sure he was doing ok with the nanotag. He was hanging out on the end of the island looking mighty fine while his mate sat on the eggs. You can just see the end of the antenna sticking out in this photo. He had already preened the nanotag beneath his feathers. 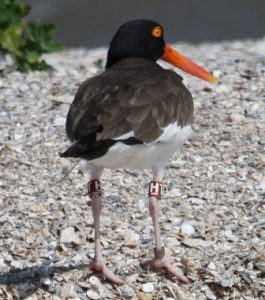 And that ended another week of oystercatcher monitoring. Next week we’ll try to get back out to East Matagorda and West Galveston Bays. I will be attending a Loggerhead Shrike conference in Nashville sandwiched in between these field days.

We’ve had a great response to the Adopt-an-Oystercatcher program! Thank you to everyone who has adopted a pair of birds. I will be sending out updates at the end of every month and sometimes in between if something exciting happens with the pair you adopted. If you aren’t familiar with the program – you can adopt a pair of oystercatchers for a $100 donation and I will update you monthly on their progress throughout the breeding season. Most pairs are from West Galveston Bay, but there is a pair from Dickinson Bay and a pair from Swan Lake too. Once I get out to East Matagorda Bay, I will add some from there.