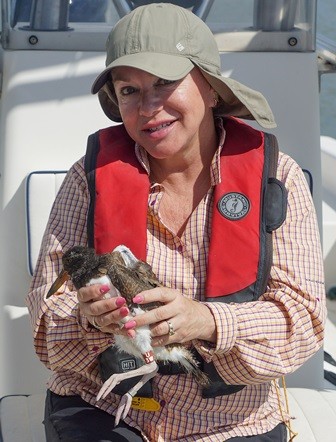 I had planned to go to East Matagorda Bay on Monday and West Galveston Bay on Tuesday but the wind got me again. Tuesday was forecast to have winds 17 to 19 mph and that is too high to be out on the water trying to get work done. Since there were chicks that needed to be banded in West Galveston Bay, I moved that trip to Monday and cancelled the trip to East Matagorda Bay. Hopefully I’ll be able to get out there next week! John Wright, Alan Wilde, and John’s sister Susan Wright joined me for an abbreviated survey of West Galveston Bay on Monday. Alan and his wife Maureen had been out kayaking on Sunday and found four new nests so we decided to check on them first.

H0 & JC were guarding a one egg nest on Marker 52. I expect JC will lay at least one more egg since they didn’t seem to be incubating it yet. A full clutch for oystercatchers is three eggs and most will lay that many on the first try, but on a second or third attempt they will usually only lay one or two. I assume that is because it is too energetically taxing for the female to continuing laying so many eggs in one season. 28 & AP were incubating a new two egg nest down island from H0 & JC. 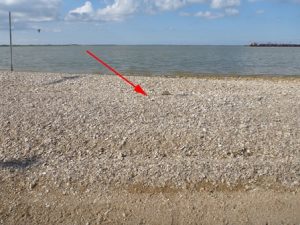 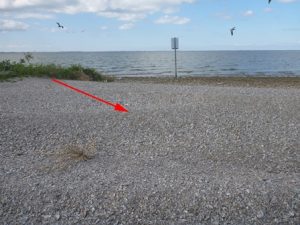 We headed over to South Deer to get the first chick banded. JN & UW were in their usual spot and John spotted the chick running from us as we approached. Alan and I hopped off and went in search of it. We finally found it laying down next to a spartina patch. I banded it U3W and then put a nanotag on it. This is the second chick to get a nanotag. I wanted to wait and see how the first one handled it before doing more. U4X is doing fine with his/hers so I decided it was time to proceed. 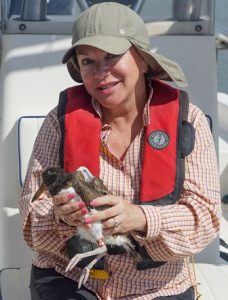 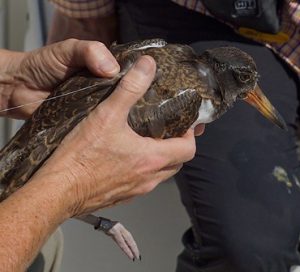 While we were in the neighborhood we checked on 13 & unbanded. One of them was along the water’s edge and the other one standing up the slope by some vegetation. I suspect they are guarding a chick there to keep the Laughing Gulls away. 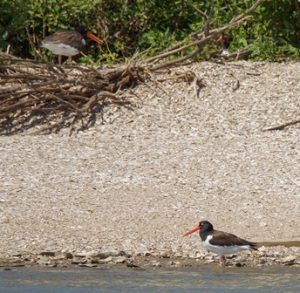 We left them alone and moved on to Y7 & unbanded. The unbanded bird was out on a reef and I searched the shoreline through my binoculars but did not see Y7 anywhere. Last time we were out, both of them were hanging out in the vegetation so we thought maybe they had chicks. Suddenly Y7 was on the reef by his unbanded mate and none of us saw where he came from so we still don’t know what’s happening with them. 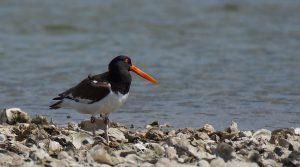 From there we headed over to Gangs Bayou. There are three pairs of oystercatchers there and the middle one had chicks that needed banding. At least that’s what we thought based on their behavior over the last several visits. Because of the new breakwater, it is difficult to get to this island and we can’t watch for the chicks to see where they are and then just go straight into that spot. This makes finding them a difficult task. We went along the breakwater slowly but we didn’t see the middle pair anywhere. I wasn’t sure what to do but we decided to head in to the backside of the island anyway and check it out. Alan and I got off and went looking. We found no chicks, not surprisingly. The adults appeared on a reef nearby while we were searching and I am not sure where they came from. The watched us the whole time though. After a bit, we decided to go back on the other side of the breakwater and watch them from the boat for a while. When we got back where we could see them, they were hanging out on the oyster balls that surround the island foraging like they didn’t have a care in the world and neither made any attempt to bring food to chicks. So maybe their chicks didn’t make it? Who knows? I won’t be surprised if they turn up with two fledged chicks the next time we check on them!

We went over to Jigsaw then to check on the birds there because I was suspicious one had a new nest last time. It turned out to be a false alarm, but a different pair was hanging out up in the vegetation so I went to check on them. No eggs.

LH is still sporting his nanotag 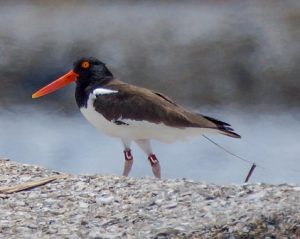 Then we headed back over the North Deer and Marker 52 to check on the other two nests that Alan and Maureen had found. J6 & UF were incubating a new two egg nest on their tiny island. This nest only has a chance if we don’t get any high tides from wind or storms. Keep your fingers crossed. 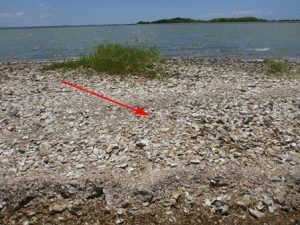 We also verified that it is JR & JH with the nest on North Deer. Very confusing situation there! 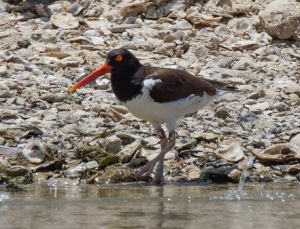 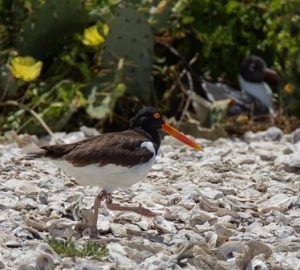 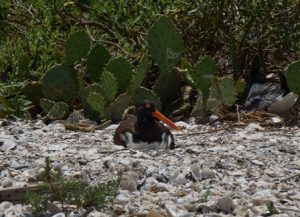 Alan and Maureen had found a nest for JJ & P4 too but we couldn’t find it today. Apparently the gulls already got the egg or the pelicans stepped on it. Bummer.

We went over to check on P3 & unbanded because they had some nice scrapes going in a new spot the last time we were out. The spot they picked is hidden from view on our regular route so I had to get out of the boat and walk around to the reefy side of the island to check on them. Sure enough they had one egg! 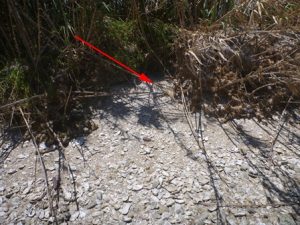 This is their fourth nesting attempt this year. P3’s wife must be getting pretty tired of laying eggs! This spot is only slightly better than the ones they picked before. I joked with Alan that I should make a sign for them that says “build nest here” because there is a nice high spot that wouldn’t get overwashed but they never choose it. I’m sure they have their reasons based on things I know nothing about since I’m not an oystercatcher but it is frustrating to watch them work so hard and fail each time. I’m rooting for you P3 & unbanded!