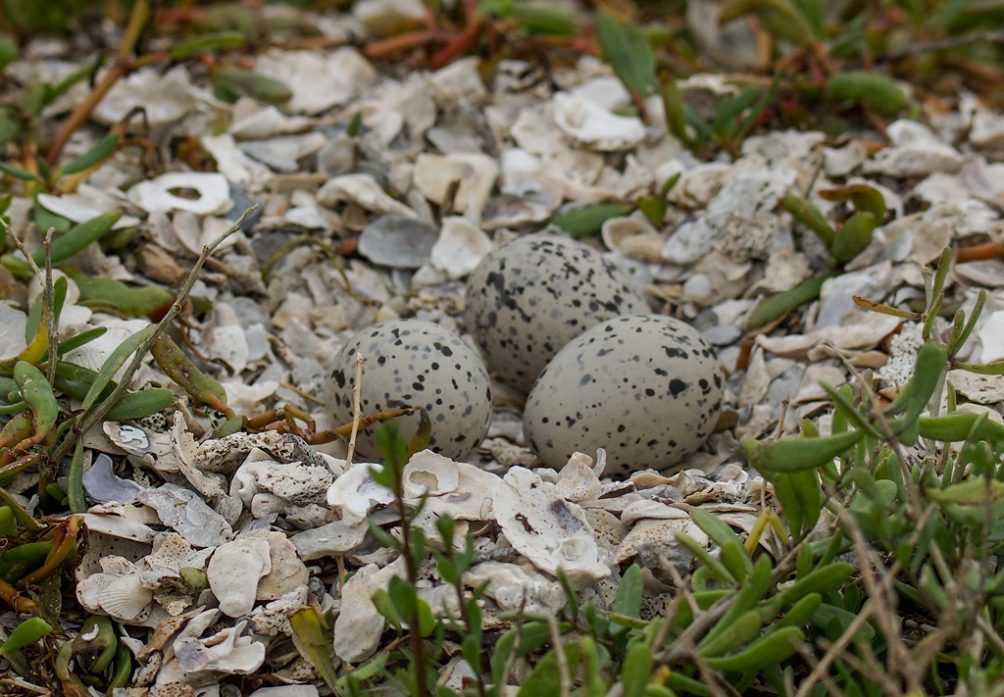 It’s time! I was joined on Wednesday by Robin Bjork, GCBO’s new Avian Conservation Biologist, and master naturalists Alan Wilde and John Wright to conduct our first official oystercatcher monitoring trip of the season. We made a short foray in January just to make sure there were no early nests but we didn’t check on all the birds. We didn’t find any nests then either. I wasn’t too surprised given how cold this winter has been. So on Wednesday we made our first full round and checked on everyone. And we made the trip in GCBO’s new boat! 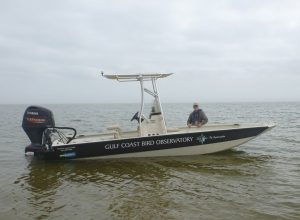 Thank you Freeport LNG for providing the funds for this purchase!

We had to wait two hours for some fog to clear so we didn’t get started until 11:00 but at least we got out there. It was fairly warm with little wind which made for quite an enjoyable day. We headed up to Swan Lake first just in case the wind picked up later. There was no sign of the pair that had been defending the shell pad on the breakwater but we did find another pair farther up which I think was the pair that nests on Zimmerman Point near there. They were too far to read the color bands. Alan, John, and Robin replaced a sign there that had broken. 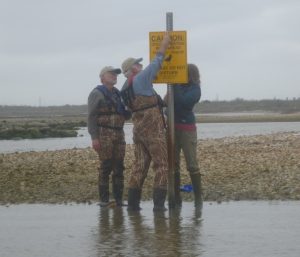 At Malone reef we found our first pair switch as there were two unbanded birds there and last year there was one banded and one unbanded. We’ll have to see if we can do something about those unbanded birds!

Up in Swan Lake we had to go super slow because the water was really low. K7 & unbanded were hanging out at the tip of their island so it didn’t look like they had a nest yet. They nested early last year so we’ll keep a sharp eye out for them. The other pairs up there either weren’t present or weren’t showing any signs of nesting yet so we headed back down towards West Galveston Bay. 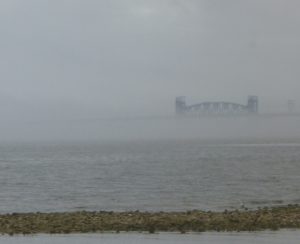 Our next excitement came when we got to Struve Luci. These are the pairs that always nest first so I figured we’d find some nests and yes we did! Three of the pairs there had nests. 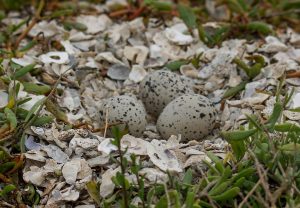 After that bit of excitement we headed over to Jigsaw where we found the same three pairs as last year. But…. We discovered that T5 & T6 still have their chick from last year with them! 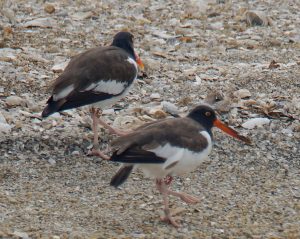 That’s a new one. If you were reading last year, you may remember me fawning over this chick over and over because I’ve been watching T5 & T6 try to nest in the middle of a Laughing Gull colony every year and fail. Last year was the first year they were able to fledge a chick. Maybe they are still fawning over it too!

We found JX, a chick from 2015 on the Offat’s Bayou reef. I think he/she was giving us a dirty look but I’m not sure! 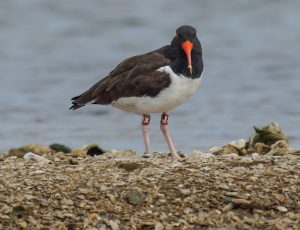 We found seven birds on the Sportsman Road docks including two chicks from last year. U3W is JN & UW’s chick from South Deer and U2W is JK & unbanded’s chick from Drum Bay last year. The other bird in the photo is YM which is a 2014 chick from the Tiki Island Spoil in Jones Bay. 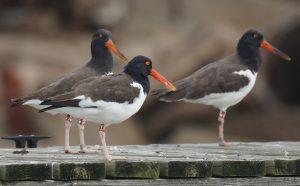 Sometimes we see other cool stuff besides oystercatchers (I know hard to imagine something cooler than oystercatchers!). Alan snapped this photo of a Belted Kingfisher that was hunting from these tree remains on Confederate reef. 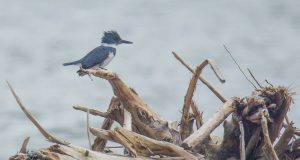 There was another 2017 chick on Confederate reef – U1Y is a chick from Matagorda Bay! 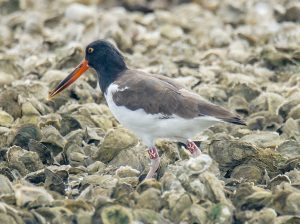 This is the obligatory oystercatcher in flight giving us the business! 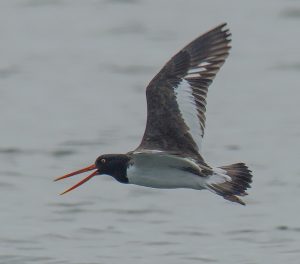 None of the birds on South Deer had anything going on although most of them were in place guarding their territories. Nothing happening on North Deer, Marker 52 or in Jones Bay. The fog started to return just as we got done and we had to use the GPS to get back to the boat ramp! Good thing we had one.

We are once again adopting out oystercatcher pairs to support this project but I haven’t updated the pairs yet so I’ll include the info about how to adopt a pair in the next week’s installment.