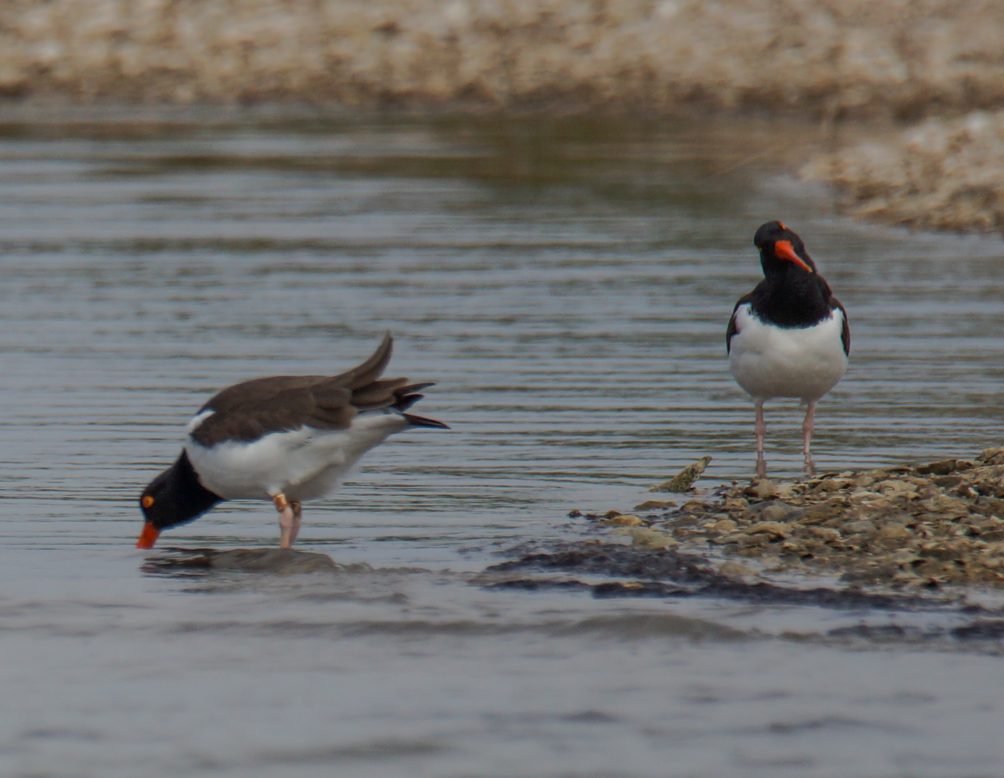 The weather bit us this week and we had rearrange things. I had planned to do West Galveston Bay on Wednesday and East Matagorda Bay on Thursday but there was a small craft advisory on Wednesday so that was a no go. We moved West Galveston Bay to Thursday and scrapped East Matagorda Bay. We weren’t able to go out on Friday because I had previously committed to do a hummingbird presentation for the Houston Federation of Garden Clubs. It was a pity because the weather was beautiful Friday!

Alan, Robin, and our Education & Outreach Manager Emma Shelly headed out Thursday in a chilly north wind and no sun. These are not my favorite conditions! Fortunately it warmed up a bit and the wind died a bit later in the day. We decided to do our route in the opposite direction which would keep us in waters protected from the north wind for the morning and then we could hope the wind died down a bit for the afternoon when we had to make long bay crossings. We looked for the pair we had found on a small island near Tiki Island with designs to trap them but they weren’t there. I hope they figured out that nesting there will not yield positive results. Then we headed around Tiki and checked on all the pairs on the islands along the GIWW south of Tiki. They were all there but none had nests yet.

In Jones Bay we found only one pair – P3 & unbanded. I was glad to see them because they’ve been missing the last few surveys. This pair usually nests early but they haven’t made an attempt yet this year. After their abysmal results last year perhaps they’ve decided to lay low for a while. We motored down the reef line that leads to Harbor Walk which usually reveals a lot of birds but today we found none. On the way back up we found one pair on the other side of the GIWW and one of them was ET! Why am I excited? Well ET used to nest along the GIWW by Harbor Walk but apparently abandoned that territory because we did not see him all season last year. Clearly he’s still in the area so we’ll have to do an exploratory mission and figure out where he moved to. 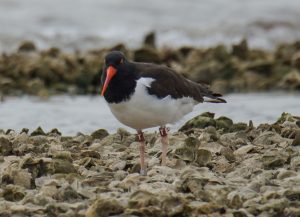 We decided to go around the backside of North Deer and see if any birds were roosting on the breakwater there. At first there were none and then suddenly there was a pair chasing another bird. Somehow the pair disappeared without us getting a look at their legs and the lone bird was unbanded. There are a lot of reefs behind North Deer which is why we don’t monitor the two pairs that nest there. While we were picking out way between reefs to head over to South Deer, we found an unbanded pair. Alan snapped this photo. When I saw it my first thought was “bobbing for apples”. Don’t know why! 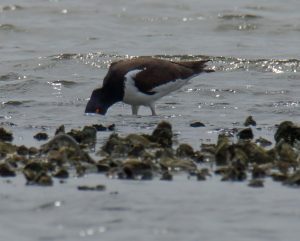 We headed over to the islands along the Galveston shoreline and found things were much the same. JN & UW were incubating their nest but trying to keep that fact from us. JN was out on the reef alone and we got a glimpse of UW hiding behind the shell ridge. Alan got another interesting photo when we found Y7 & unbanded on a reef. Do you think that unbanded bird is checking out our cool boat! 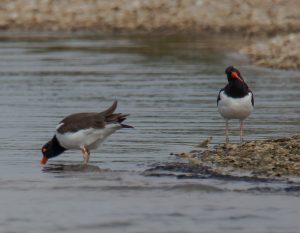 Around the corner, we saw LL feeding along the shoreline alone. Uh oh. My nest radar went off so we searched the shell ridge carefully and we saw this. 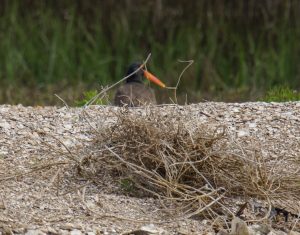 Ah ha! Sure enough the unbanded bird was trying to sneak away from a three egg nest. I really wanted to catch a bird for Emma to hold so we set up the box even though LL was trapped that way. 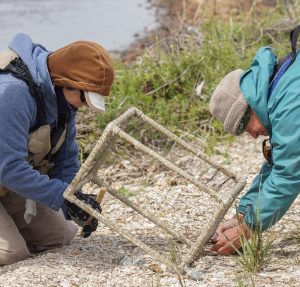 It’s been my experience that when you catch one member of a pair with the box, you cannot catch the other member of the pair that way. I don’t know if it’s because the second bird saw the first bird get caught that way or if the first bird warns the second bird somehow but this instance was no different. The bird wouldn’t go anywhere near the box so we gave up. When we approached to take the box away we found that the bird that was nearest the nest was LL anyway and not the unbanded one!

The last pair on South Deer, KK & unbanded, also have a nest. We found KK on the reef alone which meant the unbanded bird was incubating. We tried the box again with the same result as the previous nest. KK was also trapped in the box so I guess it was a bad call to spend time on that. I was disappointed but Alan reminded me there was an unbanded pair in Swan Lake that we could try the noose carpets on so I cheered up!

We checked for birds on the Confederate reef then and hit the jackpot. 14 birds and many of them were banded. We found four birds that were banded as chicks last year. U3W is JN & UW’s chick from South Deer, U1Y is from Matagorda Bay near Collegeport, U3Y is T5 & T6’s chick from last year (the one that goes back and visits its parent every now and then!), and U2W is from Drum Bay. West Galveston Bay sure attracts the young birds from all over!

We also found CE who was banded as an adult in 2016 but disappeared from its nesting area the following year. Clearly it is nesting somewhere around there. Another exploratory mission is in order! 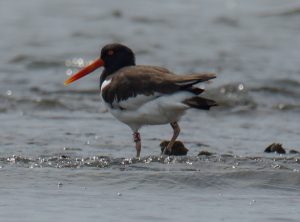 We only found one banded bird on the Sportsman Road docks and that was X4 who was banded as chick in West Galveston Bay in 2011. It defended a territory in Swan Lake for a couple of years but never laid a nest and now I don’t know where it’s hanging out. The Gangs Bayou pairs were all hanging out on the breakwater so we headed up island and checked on 16 & unbanded. When we arrived they were all upset and chasing a Northern Harrier that happened to stray too close to their nest. After they’d successfully chased the harrier away one flew to a reef and the other one returned to the nest.

From there we checked the islands near the I-45 bridge. We detected suspicious activity from two pairs that nest very near each other so we went to check it out.

I thought they would both have nests but we only found one nest and I’m not sure which pair it belongs to! Time will tell. 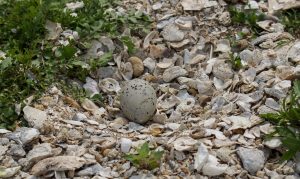 On the island with five pairs and four nests, we suspected two nests had hatched but we didn’t actually see any chicks. There are a lot of gulls around already and we didn’t want to put the chicks at risk so we left them be. Maybe next week we’ll see chicks! The other two pairs with nests were still incubating and the fifth pair still hasn’t laid any eggs. They are way behind the curve!

It was time to head up to Swan Lake then. One of the pairs along the shoreline up there wasn’t home and the other pair was just lounging about. Get going guys! In Swan Lake proper, K7 & unbanded were still incubating. R5 & X3 disappeared again which is very surprising. I thought they’d have a nest by now. L5 & 39 were hanging out on the end of the breakwater. We headed over to where the unbanded pair was supposed to be but found only a large flock of white pelicans. The birds we had designs on for trapping weren’t home! What a bummer.

On our way out we discovered a pair on the breakwater. One was banded but I didn’t see the band before they flew. I wasn’t sure who they were but when they flew out over the water, circled around and landed on the breakwater near 11’s territory I was very happy. 11 has been alone so far this season but it appears he has found a mate. Yeah! He has a particularly bad territory that is connected to the mainland and so is a prime area for mammal predation but he gives it his best every year. I feel for him so I’m glad he’s got someone to watch tv with at night J 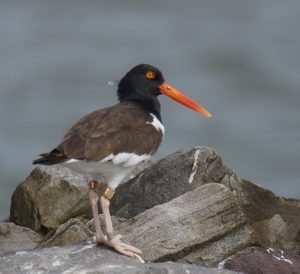 We took a bumpy ride  back over the bay and loaded up to end another trip around the bay checking on the oystercatchers.