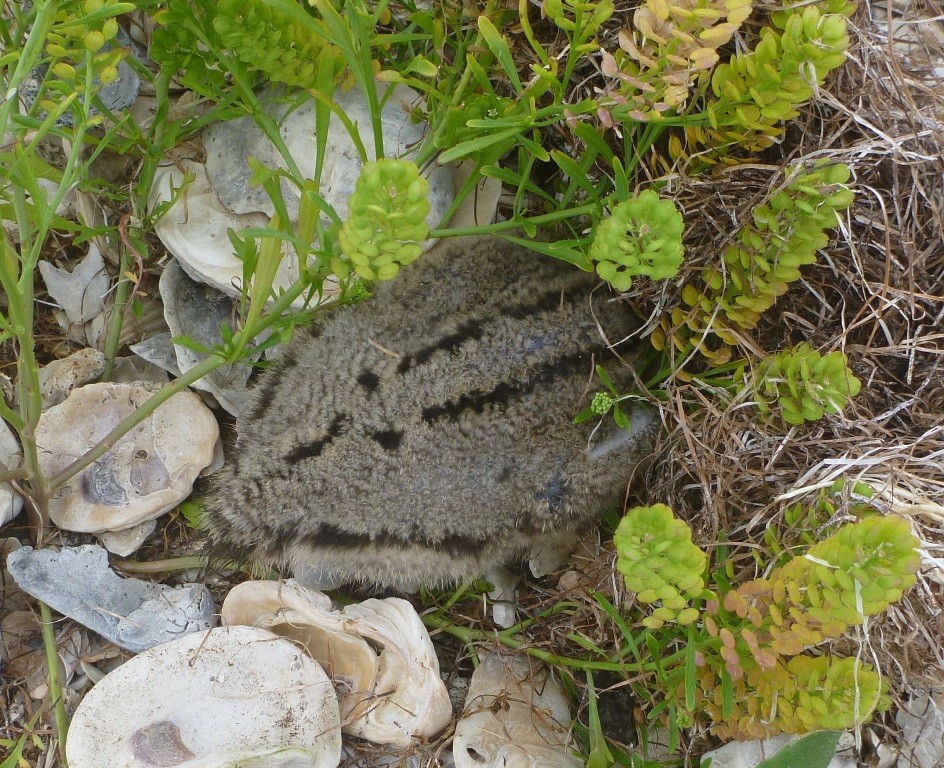 On Monday I went out to the Texas City Prairie Preserve sand/shell spit with volunteers Paula Kennedy and Joey Barnes. They found that P5 & unbanded had a nest last week and we planned to trap the unbanded bird today. Sadly when we arrived we found the nest had overwashed. The eggs were still there but they were strewn about and cold and the birds weren’t incubating them. What a bummer! Tim O’Connell from the preserve had told Paula and Joey that he saw a bird on a nest on the spit closer to where it connects with the preserve so we went over there to check it out. We found LN incubating two eggs and WR was hanging out nearby. Cool! We banded LN last year along the shoreline of Moses Lake. WR was banded as a chick in 2014. She’s the daughter of 15 & 16 who nest on Galveston Island near 8 mile road. So glad to see she is all grown up and making babies of her own!

On Tuesday I headed out to West Galveston Bay with Alan Wilde and Marlynn Miller. It was really windy and if I’d had another day to switch to I would have but I didn’t. We decided right off the bat that it was too windy to go to Swan Lake. We checked Jones Bay first which is sheltered from the wind. All was well with the pairs that have nests there. Poor FR’s island was underwater and he was nowhere to be found.

On Marker 52 we found that 28 & AP had finally decided to get on with it and lay an egg. H0 & JC were still incubating but 28 & WY’s nest was gone, probably overwashed by the high tide. JJ & P4 were hanging out on the other side of the island from where their nest had been so the pelicans probably did them in. It’s hard to watch these birds struggle every year! JR & JH were still incubating amongst a gaggle of pelicans. I wonder how they are keeping their eggs safe from the onslaught? 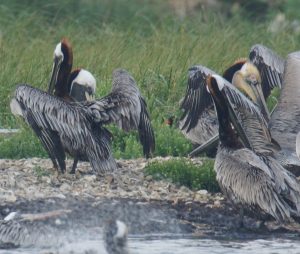 We know there are two pairs of oystercatchers on the backside of North Deer but they are in an area where there are a lot of reefs so we don’t usually go there. Today the tide was really high so we decided to check them out. They both had nests with three eggs! We tried to trap them with the box but neither one of them would go for it so we left them to it. 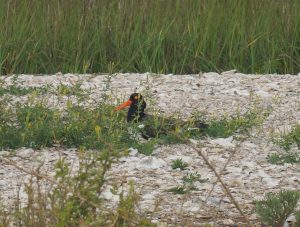 On Jigsaw T5 & T6 were still incubating but we didn’t see the other two pairs on their nests so I went up to check. In YE & unbanded’s nest I found only one intact egg and one congealed egg yolk. No sign of the shells that belonged with the yolk or the third egg. I’m not sure what happened but maybe the gulls got into the eggs. I haven’t seen a nest in that shape before. 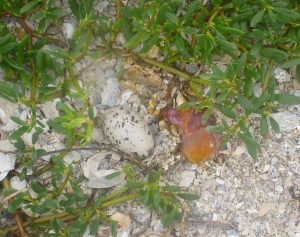 LH & WW still had three eggs so maybe we just didn’t see them on the nest. Things are still confusing on Struve Luci. I am still not sure what’s going on with 12 & unbanded but I think they lost their chick. But I don’t trust them and this is why. 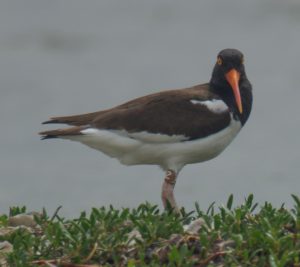 Is that an annoyed oystercatcher or what?  KR & unbanded were sleeping the day away so still no nest for them. Look like LT & JA are the only pair with a nest there now and it appears all the previous nests on that island failed. Last we found that HM & X7’s chicks were gone. This week the adults weren’t present. If the chicks hadn’t been gone last week they surely would have been this week because their territory was nearly under water. 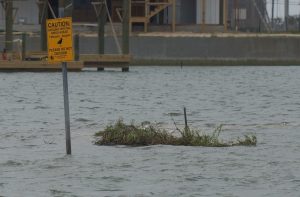 That is pretty rough for our overall productivity for the year because those early nests usually do the best. We shall see.

The news was a bit better on South Deer. HL & L4 still had a nest. JN & UW were still hanging out in the vegetation so we motored towards them slowly and I saw one chick run and hide next to an adult so we backed off quickly. 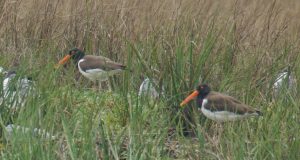 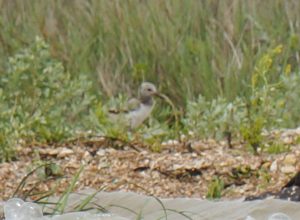 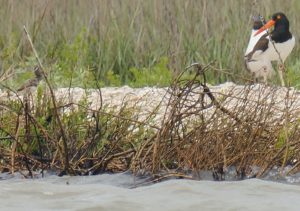 Yeah! When we approached KK & unbanded I saw one chick run up over the berm to hide. Since there aren’t any gulls there we went up and found it hiding in the spartina. 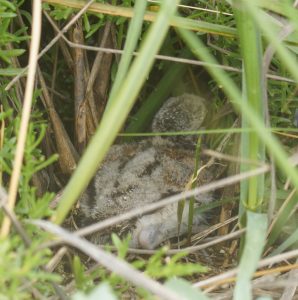 I was afraid A1A’s nest would be overwashed but it wasn’t and they were still incubating. 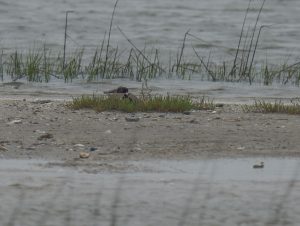 The other two pairs in that area were still incubating too. Alan had found a nest at Galveston Island State Park a couple of weeks ago and I received permission from the park to try to band the bird so we headed down that way. It was slow going because of the wind but we made it there just fine. We found three pairs there but only one of them had a nest that we could trap on. We tried but that bird wouldn’t go in the box either. Has my box lost its magic? That would be tragic.

From there we headed straight across the bay to an island along the GIWW by Harbor Walk. Several years ago we banded a bird there (ET). ET and his unbanded mate used to nest on the east end of the island on the GIWW side. They always failed due to overwash from barge wakes and they disappeared before the 2017 season. We’ve been wondering where they moved to but it’s hard to get to the backside of that island because of reefs. With the high tide and by coming at from the other side of the bay we were able to check that area. First we found XE sleeping on a reef at the west end of the island. 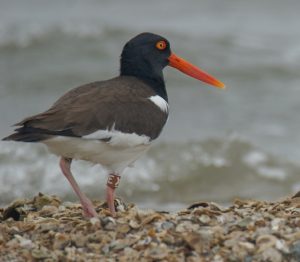 XE is the 2013 chick of a pair from Swan Lake, N3 & 11. N3 disappeared a while back but you may have heard me mention 11 as she is still around but her island washed away and now she has no place to nest. It’s good to know her last offspring is doing well. We continued our search down the backside of the island and at the other end we found ET on a three egg nest! 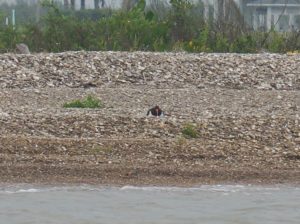 ET & XE must be a pair now and ET smartly moved his territory around to the backside of the island where his nests won’t get disturbed by the barges. Go ET! That was a heartwarming way to end the day and we headed back to the boat ramp on a happy note.

On Thursday I went down to Port O’Connor to do some Motus work and while I was there, I went out with Allan and Brigid Berger to check on the oystercatchers in the area. Brigid had found a nest with two unbanded birds and we had hoped to try to trap one of them but when we arrived we found the nest had hatched and there were two chicks! 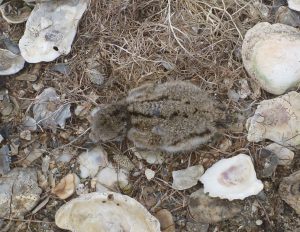 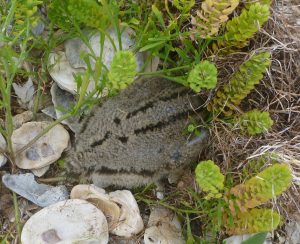 We motored around and checked on the other pairs in the area. We found three pairs with three eggs nests!

We also found a Wilson’s Plover nest while we were checking out an oystercatcher nest. 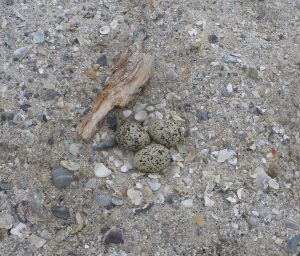