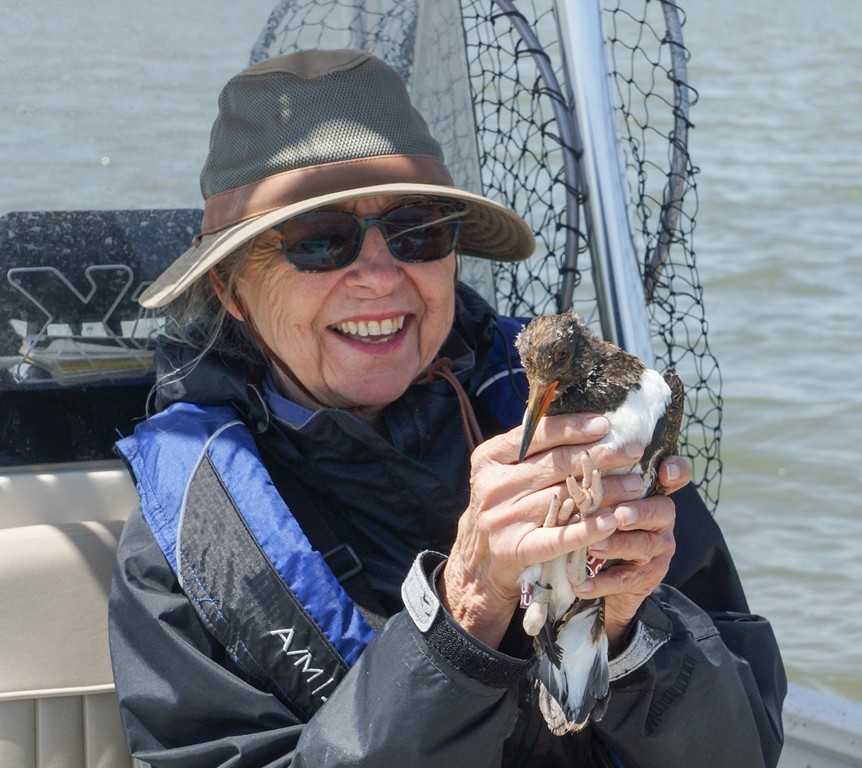 On Monday I was joined by Bob Friedrichs to survey East Matagorda Bay. Bob surveys oystercatchers for the project in Tres Palacios and Lavaca Bays and he was game to see the habitat in a different bay. We headed out a bit late because I had a dentist appointment in the morning (no cavities – yeah!) but we got the job done! First we encountered YC & unbanded on an island along the GIWW acting like perhaps they had a nest or chicks. One of them was carrying food like they do when they have chicks but when we checked it out we only found a scrape so I don’t think they’ve laid any eggs yet. 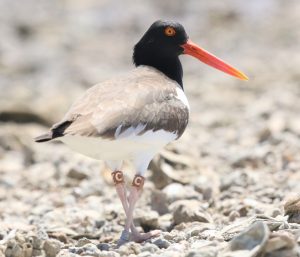 ER & unbanded and KN & unbanded were in the same state. They all had scrapes but no eggs. I guess there is a big laying party about to happen! 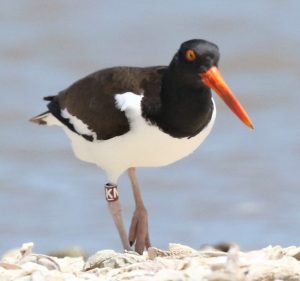 We headed out to Dressing Point and though the island was alive with many breeding herons, egrets, and the like, we did not see the oystercatchers that had a chick a month ago. Bummer! We had seen another pair on the reefs near there but by the time we got around to check on them, they had disappeared. I suspect it was LK & unbanded.

Over at the Oyster Farm we found KT & unbanded acting sort of like they had a nest but we couldn’t find one. 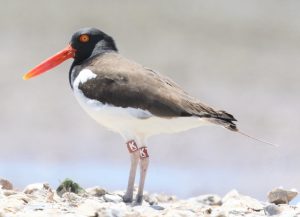 KM & unbanded did have a nest with one egg though. We headed back across the bay to Old Gulf Cut. I was excited because 17 & unbanded’s chick should be pretty big by now. At first only saw the adults but then Bob noticed the chick laying down between them. Yeah!!!! When we got close, it stood up and Bob snapped a couple photos.

We will band that one next week. 25 & unbanded had a new nest with two eggs and they were incubating it. It’s in a higher spot than their last one so maybe it will make it this time. I hope so!

On the way back to the boat ramp, eagle eye Bob spotted a pair of oystercatchers on an island along the GIWW where I’ve never seen any before. I had remarked about that very island on the way down that it looked like good habitat and I couldn’t understand why a pair wasn’t using it. We went over to check them out and discovered that it was M4 & EF, the pair from Dressing Point. So that confirms that something happened to their chick and they decided to move to different digs. It seems like a great spot so maybe they will nest there in the future. 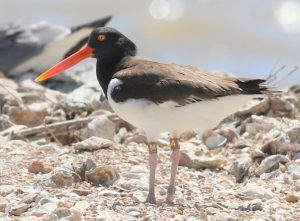 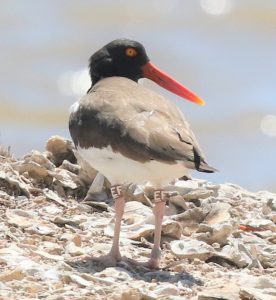 On Thursday I headed out to West Galveston Bay with Alan Wilde and Jane Lindsey. It was windy and when I say windy, I mean WINDY. The forecast was 20mph out of the north. Anything over 15mph and I start questioning whether to go out or not. But Thursday was the only day we could go and the wind was predicted to drop to 15mph by noon and to continue dropping throughout the day so we decided to go for it. Jones Bay is fairly well protected from the wind so we headed out there first. P3 & unbanded were out on a reef feeding which means they no longer have any chicks. Bummer! CA & Y2 were still incubating. 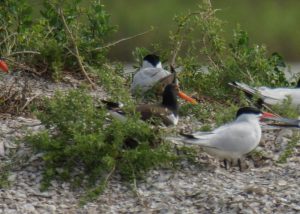 Their nest will definitely be hatched by next week. We headed down to check on ET and found him on a reef with an unbanded bird so I guess he wasn’t paired with XE after all. Sad. It made such a good story. Back up the bay to Marker 52 we went where we were very well protected from the wind. H0 & JC were not present which probably means their chick is no longer with us and 23 & WY’s new nest from last week had already failed too. Alan got some great photos of the “penthouse pelicans”. 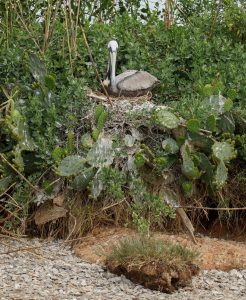 These birds have their nests on vegetation that is hanging over the water so really I guess they are balcony pelicans!

Over on North Deer JR & JH’s nest was hatched. One of them was near some vegetation so hopefully they had a chick in there. On the backside of North Deer one pair was still incubating but the other pair’s nest must have failed for some reason.

We made our way over to South Deer and found that HL & L4 were still incubating. JN & UW were still acting as though they had chicks though we didn’t actually see any. The wind was beating us pretty good there so we couldn’t look all that well. 13 & unbanded are still acting sketchy but we couldn’t go in there because the wind was just too strong and I didn’t think we’d be able to get back out again. As it was, Alan had to walk the boat through some shallow water to get us past that area. Y7 & unbanded were also acting a bit sketchy but we couldn’t go in there either for the same reason. LL & unbanded were both feeding along the water’s edge with no sign of having any chicks. I’m hoping they were just hiding!

I had hoped to band KK & unbanded’s chick today so we went over and searched the area where they’ve been hanging out. I could not find their chick! I finally decided we needed to leave and come back later and spy on them so we went over and checked Confederate Reef.

We found five birds, three of which were banded as chicks. XU was banded in 2014 and is the chick of 12 & unbanded from Struve Luci Island. We haven’t seen it since last July. It’s old enough to breed but hasn’t as far as we know. U3Y is T5 & T6’s chick from last year and U1Y is a chick from Matagorda Bay. 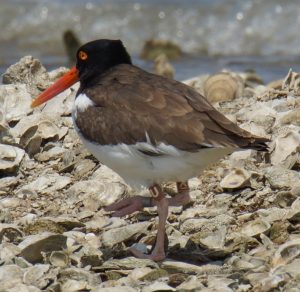 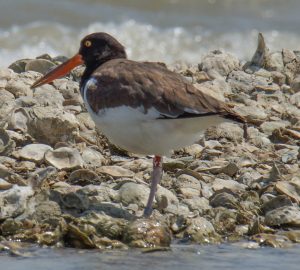 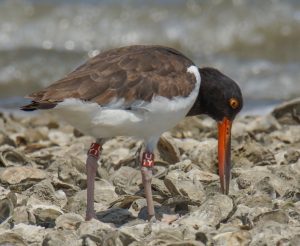 We headed over to Gangs Bayou to check on the birds there. A1A & unbanded were nowhere to be found so after surviving the high water of a few weeks ago, they must have failed when their nest hatched. Happier news for A4A & unbanded as they were standing on the shoreline with one small chick! A5A & unbanded didn’t look like they had anything new going on so we motored around to the backside of the island to see if we could find A1A and mate but we didn’t see them.

From there we headed back over to spy on KK & unbanded but I approached from a different direction so hopefully they wouldn’t realize it was us. We watched them for a while and they kept going up into the vegetation where we had searched before so we knew the chick was up there somewhere but we didn’t see it. Eventually we drifted too close and they realized we were watching them so they flew out to greet us. We went over and searched in that area again but we still couldn’t find the chick. Now that is just frustrating but you’ve got to hand it to them for keeping their chick safe! Here’s KK giving us “the look”. 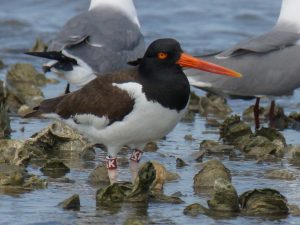 On Jigsaw, LH & WW were still incubating and YE & unbanded were out on a reef so new nest there. T5 & T6 were also out on a reef sleeping so they clearly don’t have a chick. What a bummer! Over on Struve Luci there wasn’t much going on until we got to the northeast end of the island where we discovered that HM & X7’s nest didn’t fail after all. As we got close, a nearly fledged chick popped up in front of us. 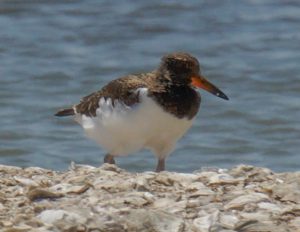 Since they are at the end of the island where there aren’t any other birds nesting, I landed the boat and hopped out to chase it down so we could band it. When I got close, it flew! I didn’t see where it went but we backed off and eventually we discovered it making its way back towards its parents. Since it was walking back to them, I surmised that it couldn’t fly all that well. There’s a chance when it flew trying to get away from me it was its first flight. I figured it wouldn’t fly again so I jumped off and chased it down again. This time it ran to end of its parent’s territory and tried to get away by jumping in the water. That is a trick I am used to and I scooped it up with the dip net. We banded it U0U and Jane was very happy getting to see it up close. 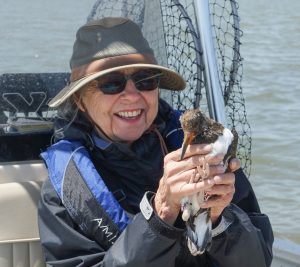 The wind had died considerably by then so we headed up to Swan Lake. 20 & unbanded were still incubating and LR & unbanded weren’t home. K7 & unbanded were again absent from their territory so clearly their nest failed. That’s the first time they haven’t fledged a chick in many years. 39 & unbanded were acting like they had a nest again but again I found no eggs. R5 & X3 were incubating but still only had one egg. L5 was out on a reef by himself still. I can’t believe he hasn’t found a new mate yet. Usually males find a new mate within about 2 weeks and he’s been alone for a month now. Sad.

On that note, we called it a day and headed back to the boat ramp.