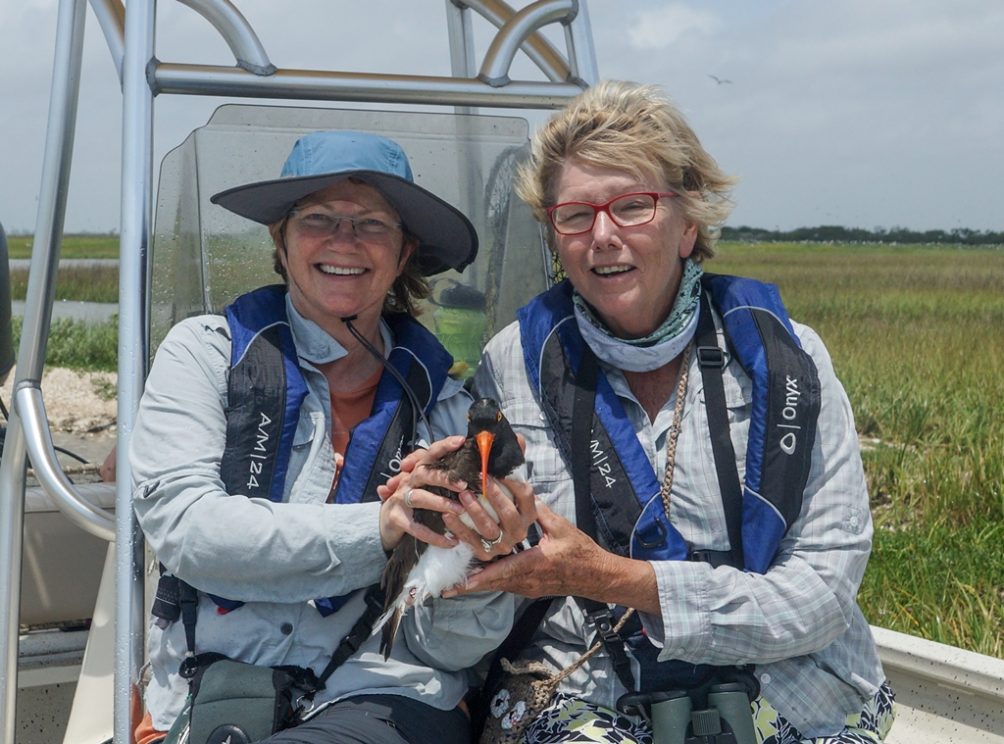 On Monday I went down to Port O’Connor to go out with Allan and Brigid Berger. They’ve been monitoring the oystercatchers there and they had a chick that needed to be banded. It was pretty windy but Allan assured me all would be well on the boat and it was! We headed out towards Grass Island where the chick was and we found it feeding with its parents. Brigid and I jumped off the boat and made chase. Usain Bolt (the chick) took off running and I nearly ran out of gas trying to catch it. I remember thinking that if it didn’t stop soon I’d have to let it get away because I just couldn’t run anymore. This is why I try to bring young people with me! Finally it made a left turn and went for the water which allowed me to catch up and scoop it up with the dip net. Phew. Don’t need to work out in the gym this week! Brigid picked out color bands W zero W for it which is W0W! 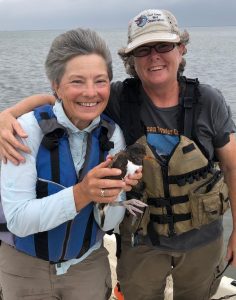 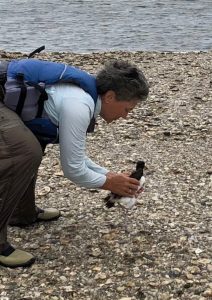 When we were done banding it, we tried to let it go so it could run to the vegetation and hide but it made a u-turn and headed towards the end of the island where the adults were. Rookie mistake on my part. I should have walked over and made the adults move to the larger part of the island. Anyway, I guess W0W didn’t feel like it was far enough away from us when it got to where its parent were so it ran into the water, swam across to another island and buried itself in some mangroves. The adults flew over calling to it but it didn’t come out. We had tried to leave as fast as possible but we couldn’t get away very quickly because it was really shallow. I figured the chick would come out when we were gone so we headed out to check on the other pairs. (I’m happy to report that Brigid and Allan went back on Friday and the chick was back on the nesting island with the adults and was making some short flights. W0W!)

We headed over to check on three other pairs that had nests the last time Brigid and Allan checked. The first pair may have had chicks but sadly the other two most likely failed. When we were traveling from one location to the next in Espritu Santo Bay, three Brown Boobies flew over the boat! This is a species that is becoming more common in Texas but is still considered rare. They are known to hang out in that particular bay though so it wasn’t a total surprise. Very cool to see them! 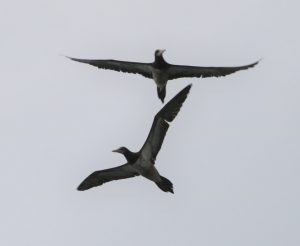 On Thursday Alan Wilde and I took the GCBO Experiences Auction winners Jean Booth and Liz Garney out for their day with the oystercatchers. John Wright had planned to escort us on his boat but his mom fell and dislocated her shoulder the night before so John had to bow out. We missed his company (and his boat!). It was windy (again!) but we made it work and it wasn’t that bad. The tide was really high and sadly we witnessed one of the pair by the boat ramp attempting to incubate an egg while the water lapped at its belly. I tried to move the egg up higher but there wasn’t much space to do that and the egg was already wet and cold any way. That was this pair’s third attempt this year. They will probably try again since its still early May.

We headed over to the south side of the bay to get the rough ride out of the way and then be able to work our way back towards the boat ramp with the wind at our backs. On Struve Luci, L8 & L9 were hanging out in their territory with their fledged chick. 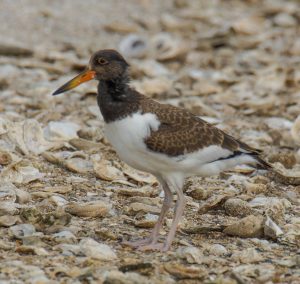 The Black Skimmers had vacated which is very odd. The only time they do that is when some disturbance event pushes them off. The last time that happened it was because someone brought a dog on the island. We did not go ashore to see since the Forster’s Terns were still on eggs. The middle three oystercatcher pairs were all loafing about but when we got to the north end HM & X7 flew out to greet us and their chick was once again not with them. Little U0U was hanging out on the rock wall where we found it last week. 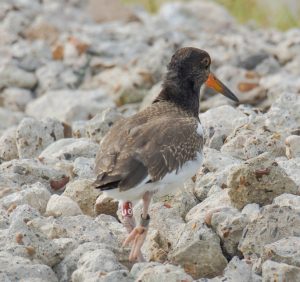 This week when we motored close to see if it was alright it flew off and the parents joined it in flight. Yippee! That is always a great sight.

We headed over to Jigsaw and found the skimmers had moved over there. T5 & T6 were standing by the water’s edge so I guess their nest from last week had already failed. LH & WW didn’t look like they had anything going on. We only saw one of YE & unbanded but I didn’t want to disturb the skimmers so I didn’t go up and see if one of them was hiding on a nest somewhere. We will find out soon enough.

We headed over to the Galveston Island shore to check on 16 & unbanded and we found them on a new nest with three eggs very close to 8 Mile Road. 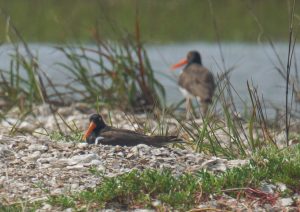 They’ve never nested that close to all the houses before and I don’t expect it to go well but I guess there other area must be overrun with mammalian predators so they decided to move. We didn’t go ashore but just checked it out through binoculars. 16 returned to the nest as soon as we left. Good luck guys!

At Gangs Bayou A1A & unbanded were on the breakwater so no nest for them. We saw A4A standing up in the vegetation with a chick! That is great news. 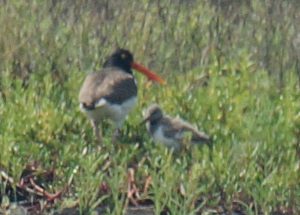 A5A & unbanded were standing around doing nothing so we moved on.

On South Deer KK & unbanded flew out to greet us and their chick wasn’t with them so I had a slight hope that we might have another chance to find it to band it but it was not to be. The chick popped up from the vegetation and as soon as we got near, it took off and made a beautiful flight down to where its parents had landed. You go little no name! LL & unbanded flew out of a spartina patch when we went by their territory so I suspect they had their chicks corralled in there keeping them out of the wind and high tide. They should be able to fly by next week. Y7 & unbanded had a new nest. 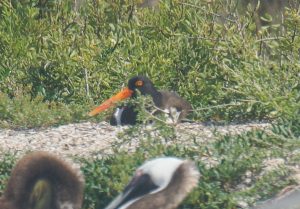 13 & unbanded were incubating their nest. 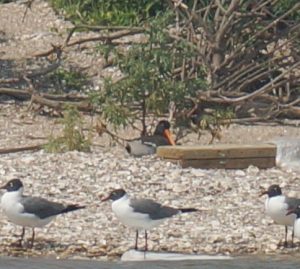 JN & UW were standing on their shell berm and when they realized we were watching them their chick popped up and made a run for it so I guess it can’t fly yet. We left them alone and went to check on HL & L4. They were both there and acting very territorial so I assumed they had a small chick and didn’t go too near. Can you find the chick mixed in with all these Laughing Gulls? 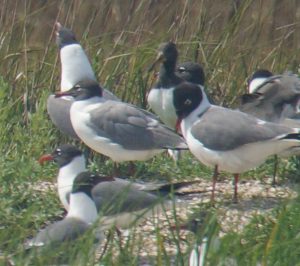 We snaked our way through the reefs to the backside of North Deer and found that one pair had a new nest and the other pair had one chick with them. 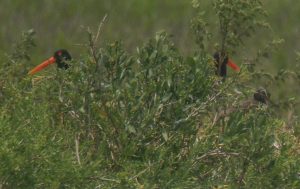 The pair with the chick was pretty far from the pair with the nest and there weren’t any other birds nesting in that area so we set up the box on the nest. We tried the box once before on this pair and it didn’t work but I really wanted Jean and Liz to get a bird in their hands so I decided to give it a go anyway. Amazingly one of them went in and laid down on the eggs and didn’t trip the box! The wind had blown the peg a bit so the string wasn’t over the eggs I guess. I reset it and before we had even gotten out to where I felt we were far enough away the bird had gone back in and tripped it. Liz picked out A9A for this male so he now has a name! 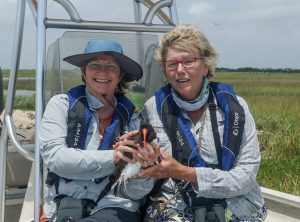 Around the other side of North Deer we discovered that JR & JH have not one but two chicks. Yeah! They were hiding in a spartina patch but they are pretty big now so hopefully they are safe from the gulls and pelicans. 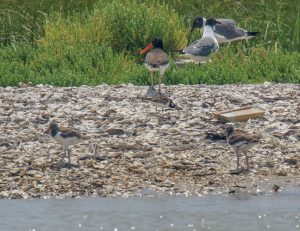 JJ & P4 had finally laid an egg and they were both guarding it from the pelicans. 23 & WY and their chick were near the penthouse pelicans and as we motored by, we saw a gull lunge for the chick! 23 & WY both went after the gull full throttle and the chick hid in a cactus. 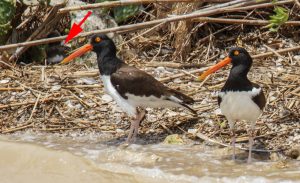 Man it is a rough life for these little guys. I think it was ok and that gull sure got the business from the adults. H0 & JC looked like they had a nest but I didn’t find any eggs. 28 & AP did have a nest though with two eggs.

We headed down the GIWW to check on ET & unbanded. The unbanded bird was incubating and since we’d had such good luck with the other pair I decided to set up the box again. ET was trapped in the box but that was several years ago so I hoped that he hadn’t conveyed to his wife that she should stay away from it. It took a while but she finally went in and this time the box tripped easily. We banded her A8A. She was a big girl! 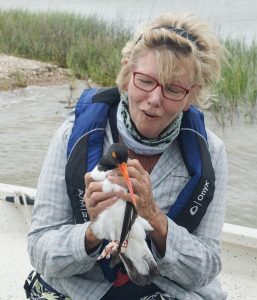 Liz let her go and she didn’t hesitate.

Back in Jones Bay CA & Y2 were nowhere to be found so I guess their nest did indeed fail. P3 & unbanded had a new nest though with two lovely eggs right below a beautiful blooming cactus. Doesn’t that make a pretty picture? 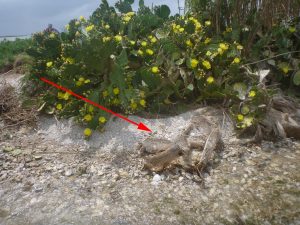 I hope it makes it! There was a pelican there with a broken wing which hopped into the water when we approached so Alan and Liz grabbed the dip nets and we made chase. The pelican keep swimming in circles and I couldn’t turn the boat in as tight a circle as it was swimming so finally I headed straight for it with Alan on one side of the boat and Liz on the other. Liz was able to snag it before it could figure out which way to go with the boat heading straight for it. We motored over to Alan’s house where his wife Maureen found a box. We had to tape the box to keep the pelican from popping out the top! John had brought a feast over for us before returning the hospital and Maureen had added more so we sat with Alan and Maureen in their beautiful house on Jones Bay and had great food and great conversation. I think the auction winners were pretty happy with their day! Smiles all around. Thank you John, Alan, and Maureen!

I wasn’t able to get out to East Matagorda Bay this week but I suspect the strong south winds caused several if not all of the nests there to overwash. I’ll find out next week.