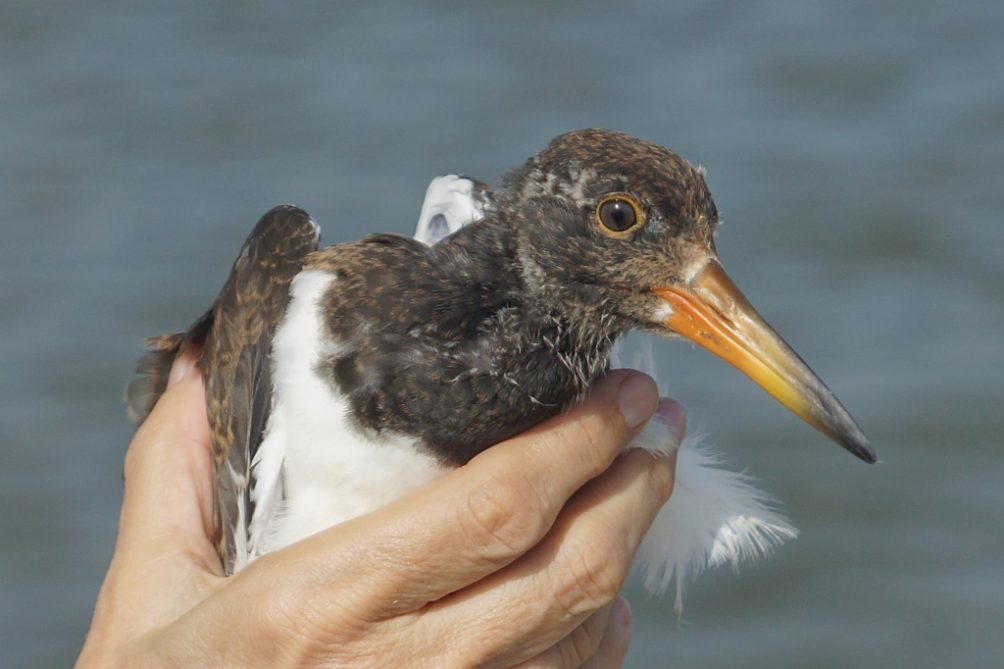 On Monday I needed to go out to Bastrop and Drum Bays to install a tide gauge for our intertidal reef project and do a count of the birds on the reefs there. I was joined by Alan Wilde and Woody Woodrow (the FWS sponsor of the reef project). While we were there we checked on the oystercatchers (of course!). I’ve only been out to these bays once this year and that visit didn’t turn up much so I wasn’t sure what to expect. We started out in Bastrop Bay and found 29 & CH on the island where they nested in 2015, the last time I was checking this area regularly. I guess they were unsuccessful this year since they didn’t have a chick with them. As with everywhere else, their island has eroded significantly. 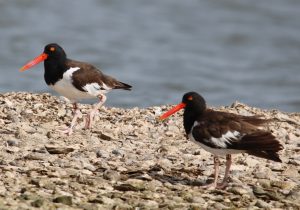 We didn’t find the other pair that should have been there but when we got to the entrance to Christmas Bay we found one of them lounging on a reef (38). In Drum Bay we counted all the reef birds and got the tide gauge installed but didn’t see any oystercatchers so we went looking around. We found only one unbanded bird until we circled back to head back across Christmas Bay. Then we found an unbanded chick of the year on a reef in an area we didn’t check on the way down. While we were watching it wondering where it came from, an adult bird came zooming in and chased it off. 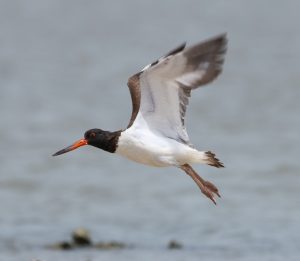 The chick flew to a distant reef and the adult pursued it again so it flew back to the reef where it started. The adult flew over and we able to see that it was JT, a bird that used to nest in that area before his island eroded to nothing. I have no idea where he is nesting now but it must be around there somewhere. I also don’t know if the chick was his and he was encouraging it to go off on its own or if the chick was someone else’s and he didn’t want it on his reef. Whichever the case I think that chick best move on! 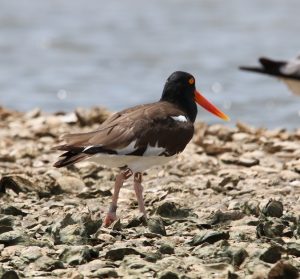 Alan spotted another pair that turned out to be AR & unbanded. No success for them either I guess since they also didn’t have a chick with them. On the way out we also found JK another male that nests in that area. No sign of a mate or chicks for him. 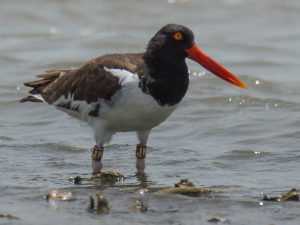 When we headed back through Bastrop Bay towards the boat ramp we found J0 & 38 hanging out together on a reef without a chick so it appears there were no chicks fledged in either of these bays this year. 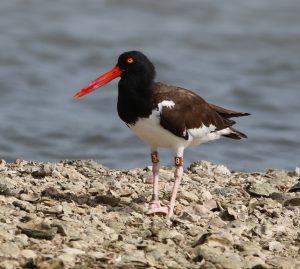 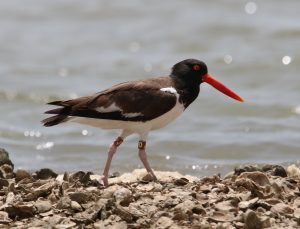 On Wednesday I was back out in West Galveston Bay with Alan and Maureen Wilde and Cynthia Hughes. We headed up to Swan Lake to band the last chick of the season. I was pretty sure it would be an easy catch because every time we’ve tried to get photos of it, it would run up into the vegetation and lay down to hide. Sure enough it ran a short distance and then simply laid down where we were able to easily pick it up. 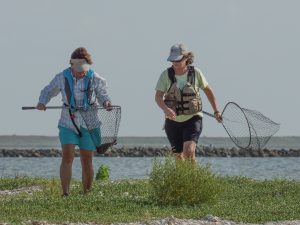 We banded the little guy U8U and let it go back to its parents who were waiting nearby. 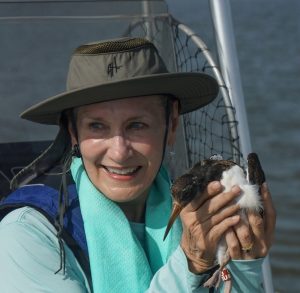 We checked the breakwaters in Swan Lake and found all the regulars but 11 & unbanded were joined by YK they young male that has been hanging out along the Virginia Point shoreline and who defended the shell pad that the Master Naturalists built last year on the new breakwater. Sadly the shell pad washed away and YK was left with no place to entice a female to join him. If he’s scouting out a territory to steal he should probably look elsewhere as 11 & unbanded’s nesting island washed away a while back and they don’t have anywhere to nest either. Hang on guys – help is on the way! We hope to do some restoration for these pairs in the next few years. 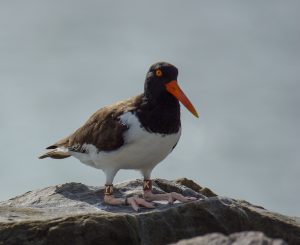 Back down in West Galveston Bay, we found 12 & unbanded and both their chicks still hanging out on their nesting territory. All the other pairs were there too except for KR & unbanded. KR has been making the rounds lately and I figured we’d see her somewhere else. On Jigsaw all three pairs were loafing about. We checked out the skimmers and discovered that most of them had fledged and there were only a few left that we could catch to band. Oops! I thought I had more time to coordinate that banding as Jigsaw is an Audubon Island leased island so I needed to make sure I had contacted all the right folks to get permission. We made a few quick phone calls and went on our way until we had an answer.

Thankfully LL & unbanded and their chicks were not hanging out on the fishing line strewn area at the end of 8 Mile Road anymore. That’s a relief! There weren’t any oystercatchers on Confederate Reef but at Gangs Bayou we found A4A & unbanded with their chick W2W hanging out along the shoreline again. A5A was down at the opposite end of the island from where it was banded so I think it has moved!

On South Deer we found KK guarding his reef and he was not happy when we checked him out. There was no sign of his mate or his chick. LL & family were not on their territory either but Y7 & unbanded and their chick W2U were hanging out in the same spot they were last week. There are still fledgling Brown Pelicans and Laughing Gulls covering nearly every land surface so the oystercatchers are being pushed off their territories.

13 & unbanded and their chick weren’t home but in the next territory we found UW without her mate or chick. For the first time since their chick fledged, HL & L4 were not on their nesting territory. I guess they are showing little W3U the neighborhood finally.

I had received permission to band the skimmer chicks so we headed back towards Jigsaw and checked out some of the reefs on the way. We found UW’s mate JN and their chick W2X there as well as KR (I told you we’d find her somewhere!) hanging out with XU. On Jigsaw we rounded up the remaining skimmer chicks (only seven couldn’t fly yet) and banded them. 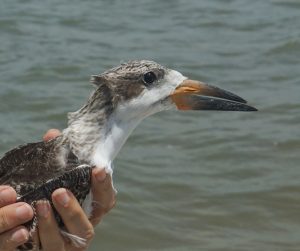 Keep an eye out for all these banded skimmers! They look like this: 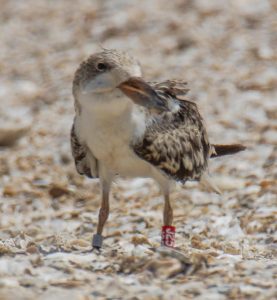 When we were done with the skimmers we headed towards North Deer and checked out the rest of the reefs. We found E7, U3Y, and U3W which are from the Confederate Reef gang. It appears they decided to move over to the reefs along the GIWW for some reason. There wasn’t much happening on North Deer or Marker 52 so we went down the GIWW and checked the reefs towards Harbor Walk. We found 28 & AP and their chicks W4Y and W4X on one reef. 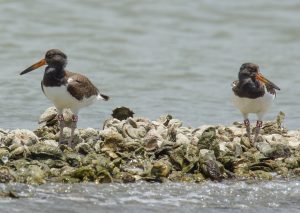 On another we found a whole group of birds that included ET, XC, X4, XJ and LU. No sign of ET’s mate A8A. I hope she didn’t leave! We’ve been seeing XC a lot this season but we only seen X4, XJ and LU a few times. X4 is a 2011 chick from Marker 52 so it is plenty old enough to breed. It held a territory in Swan Lake two years but never laid a nest. Since then we’ve seen it on reefs every now and then but not on a breeding territory anywhere. XJ is a 2013 chick from Jones Bay. It’s old enough to breed but we haven’t seen it on a breeding territory anywhere. LU was one of a brood of three in 2016 from Jigsaw that were the last chicks of the season. 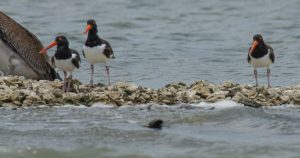 Nobody was home in Jones Bay so we headed for the boat ramp. P3 & unbanded must be showing their chicks the neighborhood too!

This project is supported by the National Fish and Wildlife Foundation and several private donors. If you would like to contribute you can do that on our website by clicking here! All donations are tax deductible and GREATLY appreciated.