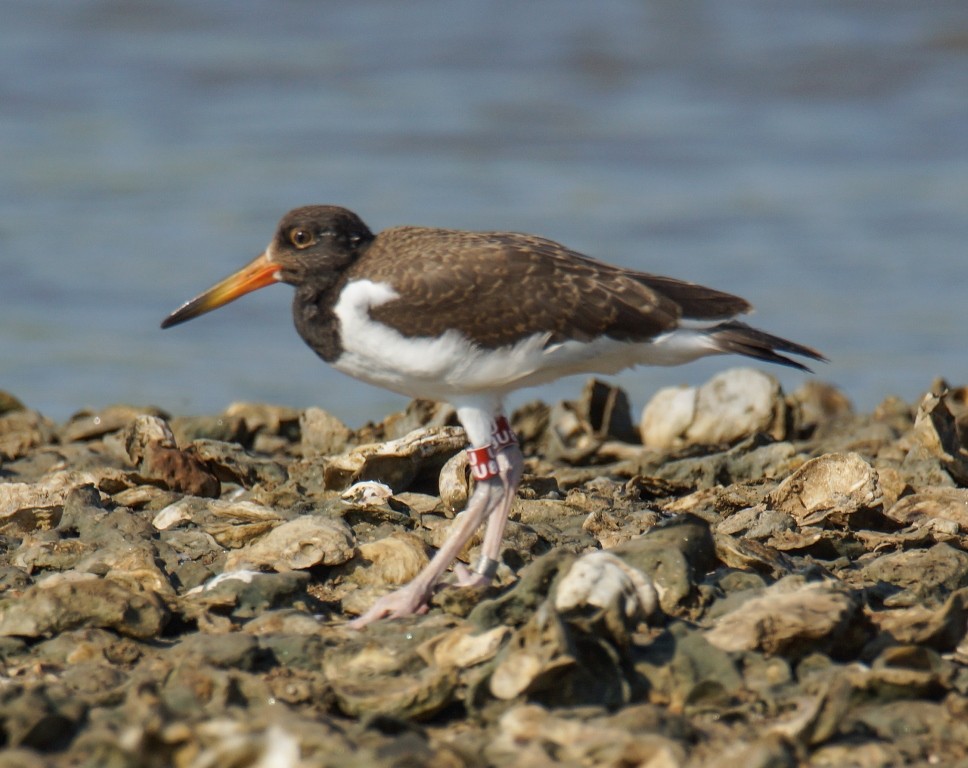 I headed out for the last trip of the season with Alan Wilde and Wayne O’Quinn. The pair by the boat ramp wasn’t around but we found them much later on a reef down by Harbor Walk. I don’t think I’ve seen them down there before. By now the oystercatchers have begun to roam around because their territorial defenses are down and so it’s interesting to see where they turn up. We headed up towards Swan Lake to check on the last chick of the season. On the way we saw 20 & unbanded at Zimmerman Point. They haven’t been around for the last few weeks so it was good to see them again.

When we arrived at Malone where the chick lives, we found its parents but no chick. Oh no! I was thinking the worst but then suddenly the chick flew from the spartina along the edge of the water out to the island where it’s parents where. Yeah!! Little U8U is fledged. That was a happy moment because the chick fledged but also a sad moment because the nesting season is over which means I’ll be spending my time doing thing that are lot less fun like writing proposals! 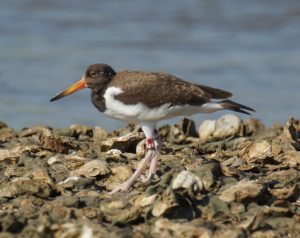 Since we were up there we checked the breakwaters for birds. We found all the regular players with no interlopers around. 11 & unbanded seemed determined to not let us get a photo of them as they kept flying whenever we approached them.

Back down in West Galveston Bay we found 12 & unbanded with their chicks out on their reef. W0U was engaging in a little oystercatcher yoga. 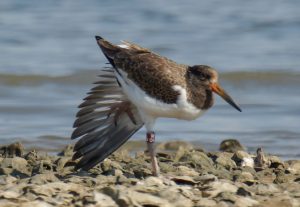 HM & X7 were on their reef but their chick U0U wasn’t with them. Same for L8 & L9. Those are two of the oldest chicks from this season so I’m sure they are out there somewhere feeling their teenage freedom and taking full advantage of their new flying licenses.

On Jigsaw the oystercatchers weren’t doing much so we checked to see if any of the skimmer chicks we banded last week were there. We found one of them still hanging around plus an unbanded one that couldn’t fly yet. We caught it and gave it some jewelry to show its friends. 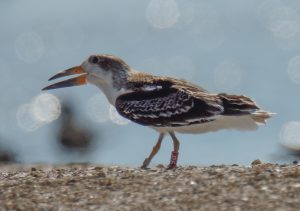 We checked the Offatt’s Bayou reefs and were rewarded with a sighting of JX, a 2015 chick from South Deer. 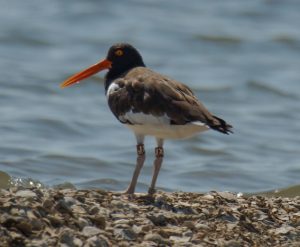 16 & unbanded were posing nicely on the reef where they had taken their chick before the high tides forced them to take it back to Galveston Island. That made me sad for them all over again. 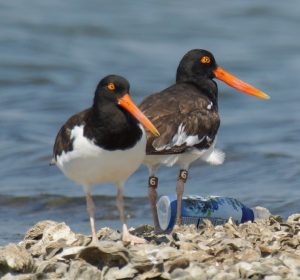 We headed over to Confederate Reef to count the birds and install the tide gauge. There were lot of oystercatchers there and we found KK and LL, both males that breed on South Deer, XA and XC, 2013 siblings from Struve Luci, U1Y, a 2017 chick from Matagorda Bay, U4W, one of LL’s chicks and W3X, one of JR & JH’s chicks from North Deer this year. Quite a selection of birds! 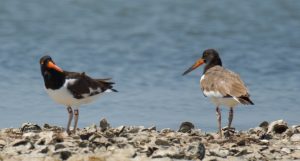 We managed to get the tide gauge installed five minutes before it was due to start recording so yeah team! In the process we added a channel marker to a previously unmarked channel.

At Gangs Bayou we found the usual suspects except that A4A & unbanded’s chick was not with them for the first time. Oh the freedom of the open bay and young wings. I can only imagine how that must feel!

On South Deer not many birds were home (because they were all on the reef!). Y7’s mate was still hanging out with their chick W2U while Y7 was out on a small reef nearby. HL & L4 and their chick W3U were hanging out on their private reef. They flew when we approached. That chick just really doesn’t like us. Will it ever forgive us for banding it?

From there we checked on the birds on the reefs along the GIWW towards North Deer and we found a whole bunch more banded birds. They included JN who breeds on South Deer, JN’s chick W2X, LH who breeds on Jigsaw, UW, a 2013 chick of L8 & L9, YM, a Jones Bay chick from 2014, E7, an adult that used to breed on Jigsaw but we don’t know where it breeds now, U3Y, T5 & T6’s chick from last year, and XU, 12 & unbanded’s chick from 2014. There was another bird there too but we aren’t sure if the band was U3W, JN’s chick from last year or U1W, one of a brood of two chicks at Zimmerman Point last year. It is really great to see all these birds and know they are doing well! 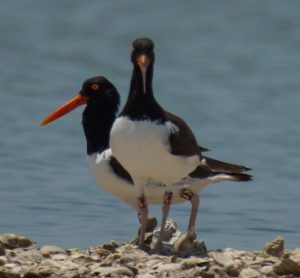 JR & JH were on North Deer without their chicks. One of them had been on Confederate Reef and we found the other one later. JJ & P4 were hanging out on a small reef near where they nest. We found WY on her nesting territory but her mate 23 and their which W0Y weren’t home. H0 & JC were having a spat I guess as they were on different parts of their territory.

We headed down to check the reefs along the GIWW towards Harbor Walk and found yet another gaggle of banded oystercatchers! They included 28 & AP and one of their chicks W4X.

Also there was X4, a 2011 chick from West Galveston Bay, R3, one of the boat ramp pair, XJ, a 2013 chick from Jones Bay, LU, a 2016 chick from Jigsaw, W1W, JR & JH’s other chick, W0Y, 23 & WY’s chick, and ET and A8A, the pair that nests down that way. Finding since we’d found JX earlier in the day and now found XJ, I was reminded how important it is to read the color bands correctly. One the two character bands, the first letter of the code is underlined making it possible to tell JX from XJ. 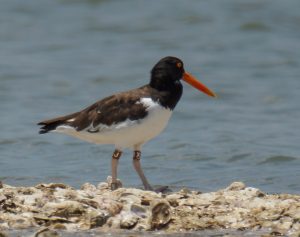 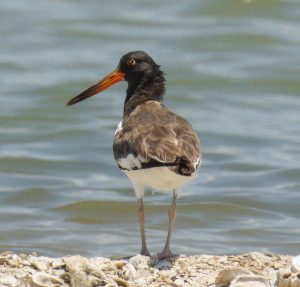 So that’s a wrap folks. It was a great year for the oystercatchers. Overall productivity appears to be 64% which is the second highest ever. Yeah for the oystercatchers! The reef surveys I’m doing continue through until spring so I’ll be out there through the fall and winter and can keep an eye on the birds. I’ve never been out there much at that time of year so it will be interesting to see who turns up!

This project is supported by the National Fish and Wildlife Foundation and several private donors. If you would like to contribute you can do that on our website by clicking here! All donations are tax deductible and GREATLY appreciated.