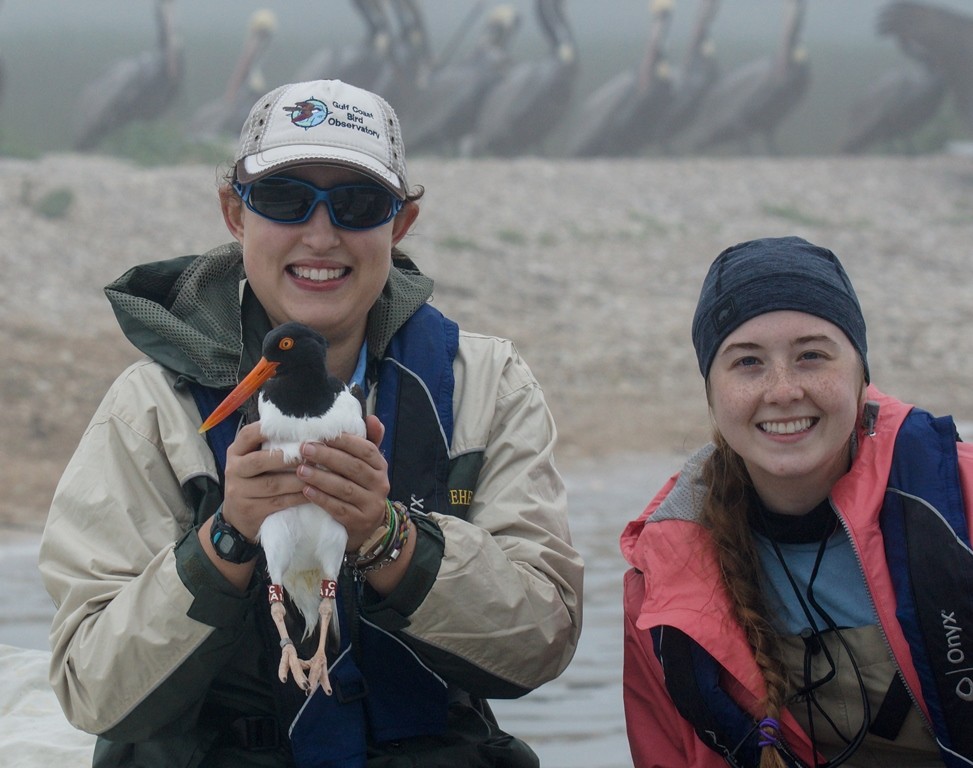 Welcome to the 2019 edition of the Oystercatcher Diaries! Although this week was the first official week of oystercatcher monitoring, I’ve been out in the bays a couple of times each month this winter on another project so I’ve been keeping an eye on the birds. On January 31st, we found that 12 & unbanded had laid one egg, the first nest of the season! Then on February 6, they were incubating two eggs. Sadly when we returned on the 20th, we discovered the nest had overwashed in a strong north wind. That was a real bummer but we found another nest on the same island that belonged to KR & unbanded.

This week Alan Wilde and I checked on the birds in Bastrop and Drum Bays while we were doing an intertidal reef survey. We weren’t able to fully explore all the pairs there because the wind was whipping, but we found that K0 & LE had two eggs on a small island in Drum Bay. 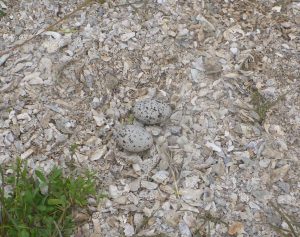 On Wednesday, Alan and I were joined by GCBO shorebird technician Taylor Bennett and our intern Kaitie Braddock to survey West Galveston Bay. I had been looking forward to this first official survey of the season for quite a while but sadly we were met with significant fog when we arrived at the boat ramp. The weather forecast said it should clear by 10:00am so we decided to try to trap the pair by the boat ramp while we waited for the fog to clear. The pair here was originally R3 & R4, but R4 disappeared a few years ago and R3 carried on with an unbanded mate. We tried several times in previous years to catch the mate but we were unsuccessful. Now this year R3 has also disappeared and both members of the pair are unbanded. We set up the noose carpets on their tiny island and then backed off to see what they would do. 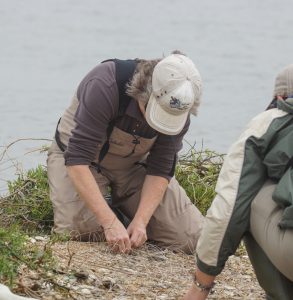 They flew in and started displaying but they wouldn’t get anywhere near the nooses. Eventually they started flying at the decoys but not landing. Then they flew off and landed on another island. A failure on our very first trapping of the season!

It was nearly 11:00 when we were done with that and had the fog cleared? That would be a resounding NO. I checked the weather again and it now said it would clear by 1:00pm. Ok I thought we can poke around Jones Bay and check the birds there until 1:00. There are three pairs there and all were on their islands. I thought briefly of setting up the noose carpets to try to get FR’s unbanded mate but when we approached they flew off into the fog so that was a no go. I suspected that P3 & unbanded might have a nest and sure enough they did! One of them was incubating two eggs. The nest is located in a good spot too so hopefully they will make it. 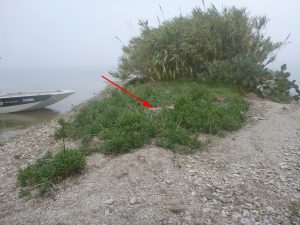 The other pair there flew off when we approached their island clearly not interested in anything we were offering. So we were done with Jones Bay and guess what. It was still foggy! We moved over to Marker 52 and checked all the pairs there. They were all on their territory’s (four of them) but no nests yet. Still foggy. I got a little more adventuresome and we checked another small island where J6 & UF nest but they weren’t present. We jetted across the GIWW and made our way around North Deer. Alan had discovered earlier in the winter that JR had died and was replaced by YM, a bird I banded as a chick in 2014. We found him with the remaining member of that pair, JH, hanging out but with no nest. 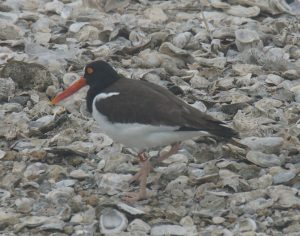 We headed around the backside of North Deer because there is a breakwater all the way around the back of that island that we could easily follow in the fog and the oystercatchers like to hang out on it. There we found W1W in one spot and XJ in another spot. W1W is JN & JH’s chick from last year and XJ is a 2013 chick from Jones Bay. W1W isn’t old enough to breed yet and I guess XJ has no territory. 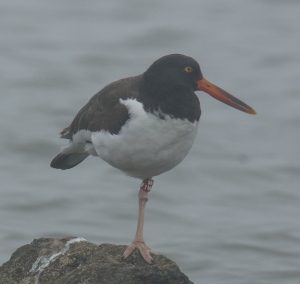 We kept going hugging the breakwater to keep out of trouble in the fog and came to the last two pairs, both of them unbanded. One of them was hanging out on the breakwater but the other pair was on their territory. I wanted to give banding these a try early in the season before the other birds start nesting so we set up the noose carpets. They flew in and one of them got caught pretty quickly. We banded her C1A which we quickly decided was CIA. Someone suggested we catch the other one and band it FBI but sadly I don’t have that band combo! 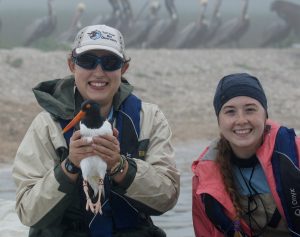 So now we’d done all the areas that were easily accessible in the fog and it was time to make a decision. No the fog still hadn’t cleared! I checked the weather again and now it said it wasn’t going to clear until the next day. Go figure! We were already halfway around our route and doing fine so I figured if we stayed out of the main channels and hugged the islands we’d be ok. I had a track on the GPS to get to South Deer and we didn’t have to cross any main channels to do it so off we went. We made it there just fine! We saw what we thought was HL & L4 hanging out on a fallen channel marker but Alan’s photos later revealed it was HL and an unbanded bird. What happened to L4? She must have died over the nonbreeding season. Around the corner from them we first thought JN & UW were not home but then suddenly they both appeared from the vegetation. Hum. Something fishy there. Sure enough they had a nest back there! 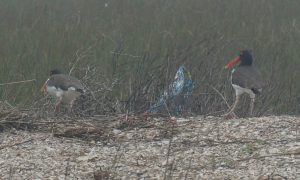 The next pair around was 13 & unbanded last year. I thought I saw a 13 on the banded bird but Alan’s photos showed an XA so we will have to check that out next time and figure out who’s who. There wasn’t a nest there at any rate. Ditto for the next pair Y7 & unbanded but when we got around to my buddy LL (Lyle Lovett!) he was there alone and acting suspiciously. I investigated and found he was guarding a one egg nest. Oystercatchers don’t typically start incubating until they have two eggs so he was just watching over the egg until his mate lays another one and they can start the real work. Farther on we found crazy KK & unbanded standing up on a shell bank. Crazy KK is named such because he and his mate are the most uptight pair I’ve ever seen. They won’t let us get anywhere near them and they hid their chick so well last year, we couldn’t find it to band it even after several tries. Compare that to LL & unbanded who are so laid back that they took one of their chicks out onto the reef right in front of us while we were in the process of banding their other chick. Oh the oystercatchers. They all have their own personalities.

Amazingly now that the weather people had changed the fog prediction to lasting all day and into Thursday, when we were done with KK & unbanded we looked up and discovered the fog had cleared significantly. Never trust the weatherperson! That allowed us to pick up speed and head over to Gangs Bayou to check on all the birds there. All four pairs where hanging out on the breakwater so no nests there. We zipped up along Galveston Island to just east of 8 Mile Road and found 16 & unbanded hanging out near where they nested last year. There is a nice bulkhead protecting this area now so maybe they will be successful.

By this time the fog had returned but the good old GPS helped us out again and we made it to Jigsaw. There were found all three nesting pairs with no nests but also four extra birds! One of them was W2Y, a South Deer chick from last year. The others looked older but are probably non-breeders. I’m not sure why LH & WW, the breeding pair where these birds were hanging out, were letting them stay there but they all seemed to be pretty chummy. 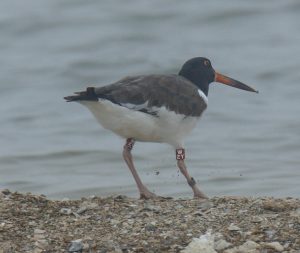 We headed over to Struve Luci to check on the pairs there. This is the island where we found the first two nests of the season, one of which had already failed. We didn’t find any new nests there but the remaining one was still fine. The tide was quite high even though it was supposed to be low tide so it’s a good thing KR & unbanded put their nest up on the highest spot on the island. It was nearly 4:00 by then and we were all beat from fighting the fog all day long so we headed back to the boat ramp. That required us to cross the GIWW in the fog, my most fearful moment of the day. We made it just fine though with all eyes on lookout duty. 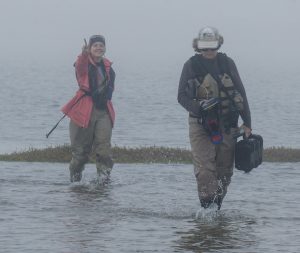 We weren’t able to make it up to Swan Lake because of the fog and I haven’t checked for nests in East Matagorda Bay yet so the total nests so far stands at six. There are many more to come I’m sure.