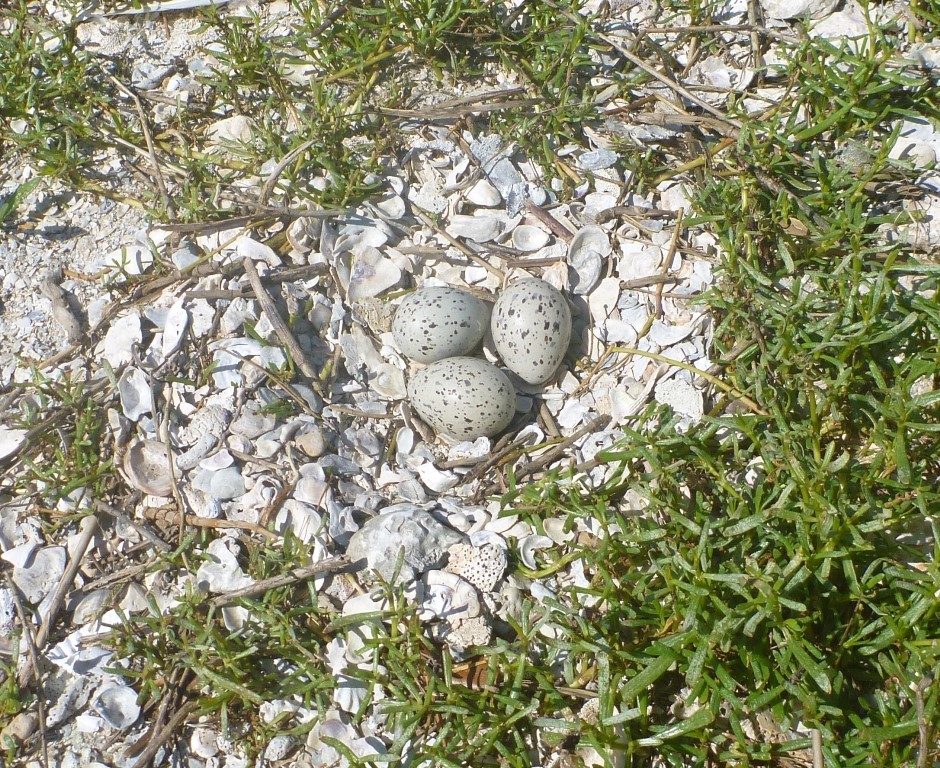 On Wednesday I was joined by Alan Wilde and GCBO shorebird technician Taylor Bennett for a tour of West Galveston Bay and Swan Lake. First off – it was cold! If you know me at all, you know I don’t do cold. I live in Texas for a reason and not being cold is a big part of it. I wore two shirts, long underwear, waders, two coats, gloves, a winter hat and a neck gator. Did I still get cold? Yes a little bit! I am very much looking forward to the warm weather ahead. At least it wasn’t foggy or raining!

When we headed out from the boat ramp, the pair that nests on the small islands there flew over and circled us calling. I guess they are still upset about our attempt to trap them last week! We figured they didn’t have a nest if they had so much time to harass us so we headed to Jones Bay. P3 & unbanded were still incubating their two eggs, but the other two pairs there were still loafing around so we moved on.

We haven’t been able to check on ET & A8A because of the weather so I was anxious to check them out today. We headed down the GIWW towards Harbor Walk but we didn’t see them. We did find a few non-paired birds though including XJ and U8U. XJ was banded as a chick way back in 2013 in Jones Bay. 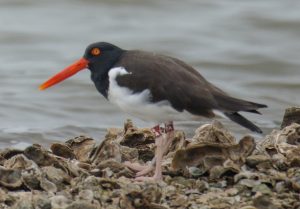 He/she is old enough to breed but we haven’t seen it paired with anyone. U8U was the last chick to fledge in 2018 and is from the Swan Lake area. 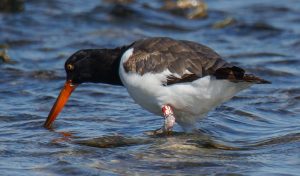 Last year at the end of the season we did some exploring and we found another pair (XE & unbanded) farther down the GIWW so we went down to see what they were up to. They were hanging out where we saw them last year but didn’t have a nest so we headed back up the GIWW. We found ET & A8A hanging out on a tiny island where they attempted to nest last year. They weren’t successful there but if they start now, they might be able to pull it off.

We were heading for Marker 52 and North Deer when we noticed a guy waving at us from a small boat that appeared to be anchored. Uh oh. Sure enough, their motor had died and they were stranded. They weren’t dressed very warmly and they looked pretty cold! They said they needed to go to Offatt’s Bayou near Moody Gardens. A long haul, literally! We strung a line between the two boats and to off up the GIWW passing between Marker 52 and North Deer. That allowed us to check on the birds there with binoculars as we passed. None of them appeared to have nests. It took over an hour to get the broken boat and it’s passengers to the boat ramp they had launched from. I have never been in Offatt’s Ba you so it was pretty comical with the guy in the boat being towed yelling instructions at us to avoid reefs and rocks and other hidden treasures as we made our way to English Bayou (a place neither Alan nor I had ever heard of!). We got them safely to their dock and they were of course very thankful! Pay it forward folks. 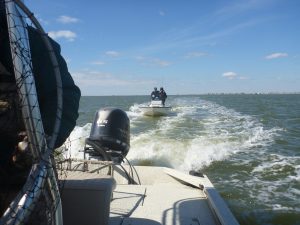 Once we got back out of Offatt’s Bayou we checked on Struve Luci the island nearest there. KR & unbanded were still incubating but they had lost an egg somehow and now only had one left. I don’t think it hatched as they weren’t acting like they had a chick and the eggs haven’t been there long enough so I’m not sure what happened. There aren’t many gulls around there. Another mystery. 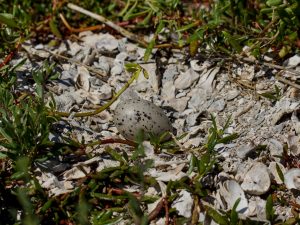 12 & unbanded had laid a new egg to replace their nest that was overwashed but the other three pairs there are still thinking things over I guess as none of them had nests.

We headed up towards Swan Lake the other area we haven’t been to check yet because of the weather but neither of the pairs along the Galveston Bay shoreline were home. In Swan Lake proper we found 11 & unbanded hanging out on one of the breakwaters. Their nesting territory is pretty much completely washed away at the point. I’m hoping to be able to do some restoration to help them out soon. I figured K7 & unbanded would have a nest because they always nest early and sure enough we found K7 incubating three lovely eggs. 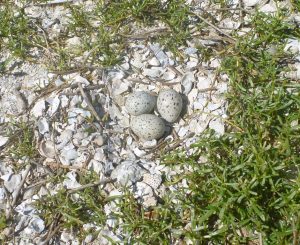 We approached R5 & X3’s territory and were greeted with this.

We didn’t think the R5 & X3 were there so we went to check on L5 & unbanded. They were hanging out on a reef enjoying the sunshine. Their territory is poor and I can’t remember the last time they even tried to lay a nest. Keep that in mind when reading what happened next. As we passed by R5 & X3’s territory on the way to L5 & unbanded some of the pelicans flew and R5 & X3 came flying out with them. So they were there! They flew to a nearby breakwater so when we were done with L5 & unbanded we went to see if R5 & X3 had a nest. They didn’t but they did have a very nice scrape prepared. When we came back around the other side of the island, L5 & unbanded were standing in R5 & X3’s territory like they owned it. Oh boy. R5 & X3 came flying over and landed about 20 feet away from the intruders. L5 & unbanded started displaying and calling and R5 & X3 just stood there watching them without reacting. That must have really frustrated L5 & unbanded because next thing we knew, one of them was dive bombing R5 & X3. It appeared there was actual physical contact! Finally R5 & X3 took to the air in hot pursuit and an aerial battle ensued. I don’t think L5 & unbanded will be successful in taking over that territory but you have to give them props for trying!

We checked the rest of the breakwater and found the other pair from that area 39 & unbanded lounging the day away. All pairs accounted for so we headed back to West Galveston Bay. We checked Jigsaw and found two of the three pairs out on a reef. No nests yet so we moved on to the Galveston Island shoreline. There we found 16 & unbanded hanging out along the shoreline. No nest but we saw them copulate so it won’t be long now!

At Gangs Bayou we found all three pairs hanging out on the breakwater and where there had been a fourth pair last week there was a single bird. That usually means the other one is on a nest but we didn’t see another bird anywhere. It was getting late so we didn’t go walk around and investigate. We headed over to Confederate Reef to retrieve the data from my tide gauge and reset it and we discovered this guy walking around on the reef. 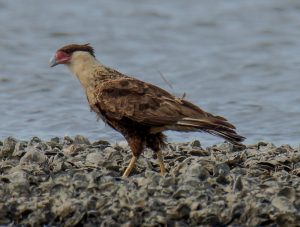 Weird. Never seen that before. It’s a young bird so presumably just learning the ropes of feeding. We went to check on the birds on South Deer. KK was out on a reef by himself and there was no sign of his mate. We didn’t see her on a nest but I bet she was. We’ll check it out more thoroughly next week. When we got to LL & unbanded, they suddenly flew up and started giving a classic oystercatcher triple alarm call usually reserved for telling chicks there is danger. I couldn’t understand why they’d be doing that for us but then I saw that the caracara had flown over and they were chasing it. I took the opportunity to see if they had laid more eggs and sure enough they now have three. Woohoo!

Y7 & unbanded were feeding on a reef so we moved on to the next pair which used to be 13 & unbanded. We verified that it is now XA & unbanded. Lucky number 13 must have died. So sad. We lost a number of the older birds this year. Let’s take a moment to remember our fallen heroes: R3, JR, L8, 13, and L4. Sniff, sniff. We will miss you all!

Ok onward. JN & UW were still incubating only one egg which is a bit odd but there were already a bunch of gulls hanging around so they could have laid another one that the gulls managed to steal. No telling. Maybe the one egg will be enough. HL & unbanded were out on a reef so no nest there.

It was really getting late by now so we checked on two pairs on North Deer that we weren’t able to see from the boat when we went by towing the disabled boat. Neither appeared to have a nest but C1A the bird we banded last week was happily feeding on a reef.

We headed back to the boat ramp to get warm!

On Friday Alan and I were joined by Joel and Janet Mondlak our current RV volunteers for a tour of East Matagorda Bay. I hadn’t been out there since September so I was anxious to see what the bird were up to and how the islands had changed over the winter. It was a little foggy but nothing bad so we didn’t let it deter us. We found A7A & unbanded on a small island along the GIWW. I am not sure where they will attempt to breed but I don’t think it will be there.

None of the other pairs in that area were present so we took the opportunity to put up some new signs and repair the broken ones. 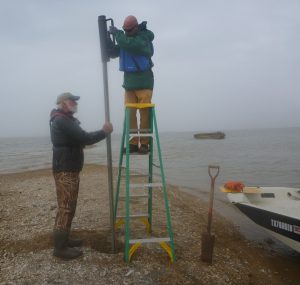 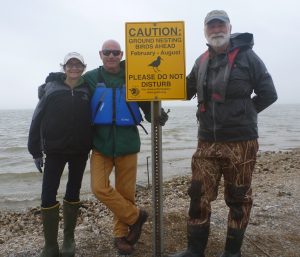 We headed down the GIWW to Old Gulf Cut and found that 25 & unbanded were also not at home. 17 & unbanded were but they had no nest. This pair nests early every year so it surprised me that they didn’t have one. Perhaps they did and it got overwashed. We’ll never know. The fog had cleared up a lot so we headed across the bay to the Oyster Farm. We found an unbanded pair on a reef there but neither of the pairs that nest there so we did some sign repair there too. When we went back to where the unbanded pair was to make a trapping attempt they had vanished. Pooh.

We checked out Dressing Point the large waterbird nesting island. There weren’t any oystercatchers there but the Great Blue Herons were already on nests in the prickly pear cactus patch and the rest of the island was covered with all manner of egrets, herons, and pelicans. Soon they will all be nesting!

On the way back to the boat ramp we discovered a pair along the GIWW that wasn’t there when we passed by earlier in the day. LF & unbanded usually nest on a small island near Dressing Point. I guess they aren’t ready to get started yet. 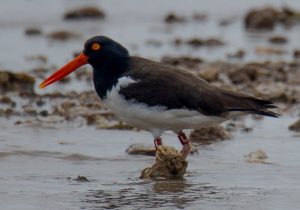