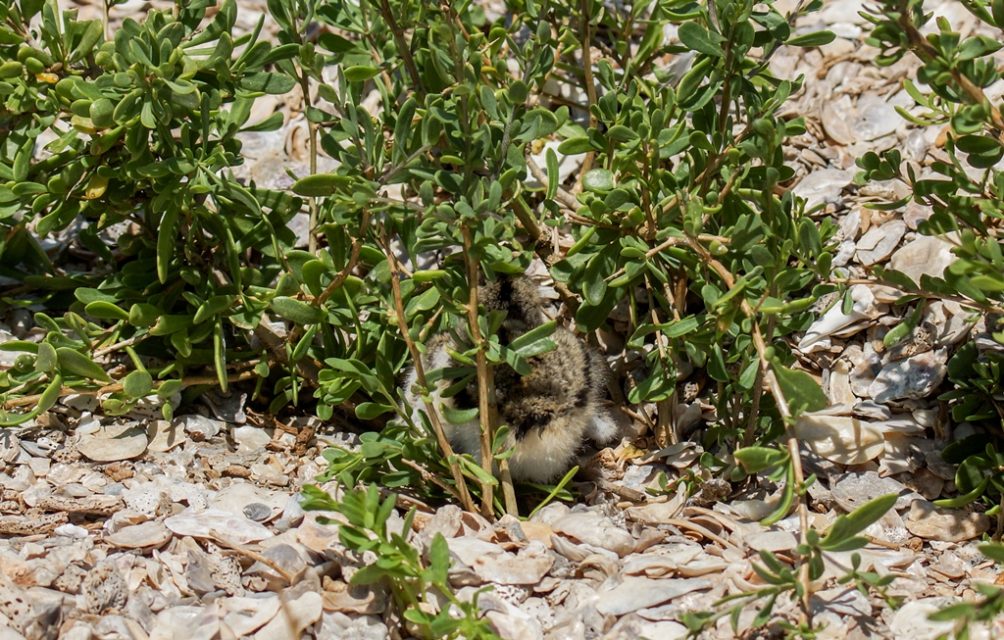 On Monday, I was able to check out the oystercatchers in Tres Palacios Bay and part of Matagorda Bay with Bob Friedrichs and our Experiences Auction winners Jean Booth, Liz Garney, and Alice Ann O’Donnell. The weather was beautiful and I was able to wear my sandals and no coat for a fantastic change. 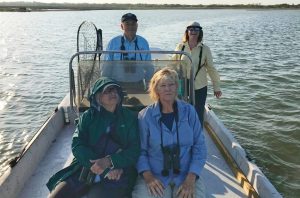 We found two pairs and one trio on Tres Palacios Bay. A trio? Yes a trio. There were three birds hanging together where there should have been a pair. What’s up with that? Oystercatcher threesomes have been documented on the Atlantic Coast but I’ve never seen one here. I’ll be interested to hear from Bob how that situation works out!

The other two pairs in Tres Palacios Bay had nests and we set up the box and trapped one of the birds from an unbanded pair. Bob picked the C4A bands for it and Jean, Liz, and Alice Ann helped me band it. 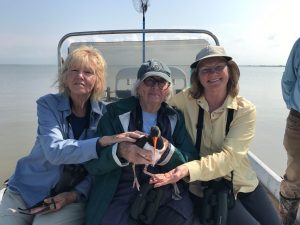 We found four more pairs in Matagorda Bay and three of them had nests. Two of them used to nest on some shell bars near the entrance to Oyster Lake. This year both chose to nest on the mainland instead. I guess the shell bars have eroded significantly and the birds are getting overwashed too much. Choosing to nest on the mainland isn’t a good choice but I guess they just don’t have any good choices to make. One pair put their nest alongside a sand road frequented by fishermen. The location is reminiscent of where a Killdeer might put their nest and I doubt it will go well. 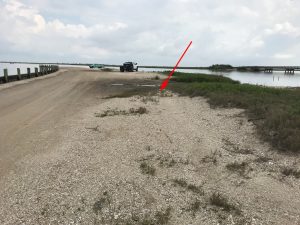 On Wednesday I checked out West Galveston Bay with Alan Wilde, Lizzie Sander (Texas A&M Galveston student) and Mitch Philpott (Galveston Bay Area Master Naturalist). There was a north wind but it wasn’t as bad as I feared and there wasn’t any fog for a change! We checked out Jones Bay and again found FR & unbanded on P3’s islands. Where has P3 gotten off to? Sadly we didn’t see H0 & JC incubating and when we went over to check we found their eggs were gone. Not sure what happened there. There aren’t many gulls in that area and though the nest was low, Alan said the tide had not been very high. Hopefully they’ll try again.

On a more happy note, CA & Y2 had a new nest amongst the Caspian Terns on one of the Jones Bay Islands. Maybe the terns will give them protection from the gulls. 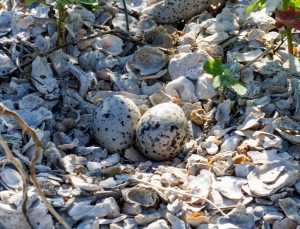 We checked the reefs out for non-breeders and found ET & A8A hanging out on their island with a scrape but no eggs. Get with it guys. On North Deer the unbanded pair was incubating and so was YM & JH. 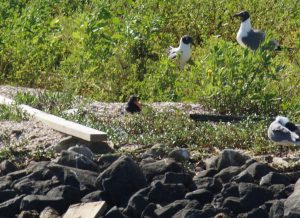 In between those two pairs used to be no man’s land (or no oystercatchers’ land anyway) but this year W5 & unbanded have apparently decided it’s a decent spot to give it a go. From a distance, I saw something on the shoreline that might have been an oystercatcher but it also might have been a palm frond. I just couldn’t tell. Alan’s photo captured the more important thing – a bird apparently on a nest higher up on the shell. 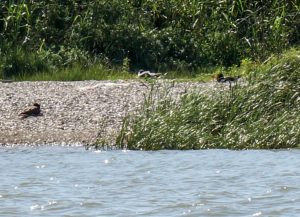 We could see 23 & WY incubating their nest from the GIWW so we left them alone. JJ & P4 were not incubating their nest though and when we looked we found their eggs had disappeared too. They are in an area full of gulls and pelicans so one or the other is probably the culprit. Poor JJ & P4! They try so hard and yet they most often fail.

On the backside of North Deer, C1A & unbanded were incubating and the unbanded pair farther around had a new nest with two eggs. They aren’t near any of pelicans (or other birds) that have started nesting, so I set up the box and we caught the male. We banded him E6A so he could easily be distinguished from C1A. 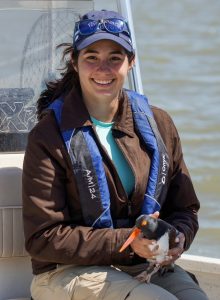 Good to get at least one member of those pairs banded so we can tell them apart. We headed off to South Deer. HL & unbanded were hanging out behind the vegetation but they didn’t have a new nest yet. JN & UW had increased their egg count by two and are now incubating three eggs. For a few minutes I thought the gulls had gotten their eggs again but then Alan pointed out I had pulled up to the wrong shell patch. I’ve seldom been so glad to be wrong about something!

Nothing was happening with the other pairs until we got to LL & unbanded. We found their nest with one egg on February 27 and since they incubate for 28 days it was time for it to be hatched. When we arrived they looked like they were still incubating though so we went to investigate. There was still one egg in the nest but there was also this! 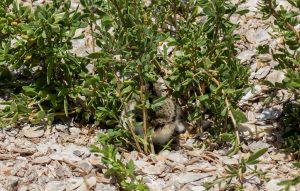 Go LL & unbanded! Hopefully there was another chick up there somewhere since they had three eggs. Only time will tell. KK & unbanded were once again absent from their territory and we found them on the Sportman Road docks. I cannot for the life of me figure out why they are hanging out on the docks (3 weeks now) instead of defending their territory and laying some eggs. There were a bunch of young birds on the docks too – those that are less than 3-4 years of age and thus not old enough to breed yet. I have no idea what the appeal of those docks are but they sure draw the shorebirds.

At Gangs Bayou there was still only the one nest. A4A & unbanded now have three eggs! A5A & unbanded have a nice scrape prepared though. 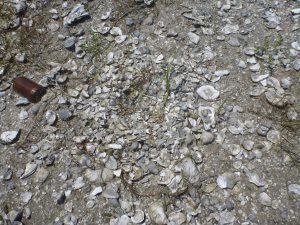 Can you see it in the photo? It’s the area in the middle of the photo with the smaller shells. Although oystercatchers don’t build a stick nest, they are very particular about the shells in their scrapes and I’ve seen them sorting shells and discarding the ones they didn’t like. JX was laying up on a shell ridge looking very much like it was incubating a nest but when I checked all I found was shell. No scrape and no eggs!

We moved on to check on 16 & unbanded along the Galveston shoreline. Happily they had a new nest with two eggs. We could see it from the boat so we didn’t get off the boat eliminating the possibility of leaving a scent trail behind since that area is full of coyotes, raccoons and cats. 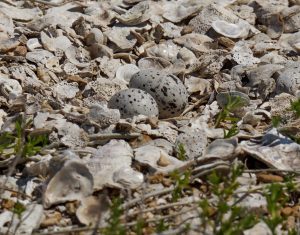 On Jigsaw all was the same. T5 & T6 are still incubating their one lowly egg and the other two pairs haven’t started nesting yet. On Struve Luci we once again saw HM without his mate X7. Last week I was suspicious they were nesting somewhere not on the island so this week we investigated and found they most likely have a nest on a rock wall that extends out from Galveston Island. I was happy to discover that the homeowner there (Karen) has been watching them and keeping everyone away. Yeah Karen! That nest is highly prone to predation by a mammal too so it’s good she’s keeping an eye on it. 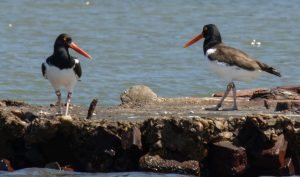 12 & unbanded’s nest should be hatched next week. Excitement! The first of the Black Skimmers have arrived as well so we will have to respect their sensitive nature from here on out.

It was time to head up to Swan Lake and it was still pretty windy. The crossing of Galveston Bay to get up there is not fun in the wind but we made it. No nests on the way and no nests in Swan Lake proper either but we did have a surprise. First K7 & unbanded were nowhere to be found until we approached their island and then they flew in from somewhere. I’m beginning to wonder if their nest failed after all. Then when we went to check on R5 & X3, we found instead L5 & unbanded in their territory and X3 hanging out with YK on a nearby mudbank. What? Where is R5? Another fallen soldier? Man those older birds are dropping like flies this year. L5 & unbanded have been trying to get that territory from R5 & X3 for a while now and it looks like they just might have accomplished it with R5 out of the picture. YK is a 2014 chick and has been hanging out in that area for a couple of years. He was the male that defended the shell pad the Master Naturalists built on the breakwater in 2017. When that didn’t work out, he defended a small island that is too low for nesting in 2018. Now it appears he may have a mate in X3 but a territory dispute to settle. 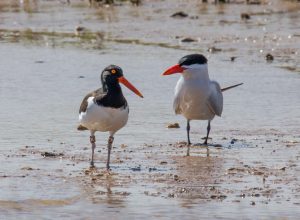 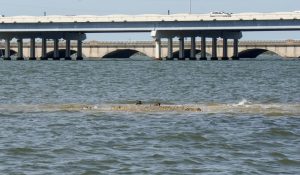 Can you believe they are trying to nest on that thing?! The eggs were nearly underwater and cold so I suspect they had been underwater at high tide which had occurred about an hour before. We set up the box to try to trap one of them but they were having none of that. I suspect that nest won’t be there next week. I hope they can find someplace better but this is just one illustration of how limited suitable nesting habitat is. I’m really counting on our island restoration project in Jones Bay to be a big success so we can replicate it in other places.