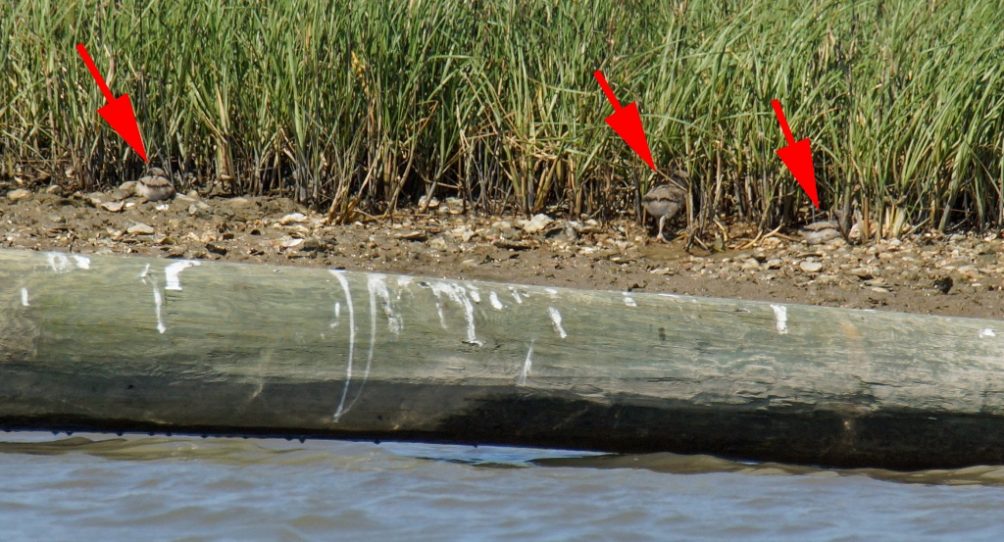 Well this week was a challenge, but before we get to that I think a lesson in wind driven tides is in order. The tidal range here on the Gulf Coast is only a foot or so but because of the orientation of bay inlets/outlets to the Gulf of Mexico and the shallowness of our bays, we have wind driven tides that are often larger in range than the sun/moon driven tides. This past Saturday we had strong south winds of 20 mph or greater which drives water into the bays and causes a high tide regardless of what the tide table says. I was watching the tide gauge at the railroad bridge that runs alongside the I-45 bridge across Galveston Bay and according to it the tide rose to 3 feet at one point which is quite high for that bay. During that night however, a very strong cold front moved through the area and caused north winds in excess of 20 mph all day Sunday. The effect on the tide in West Galveston Bay was dramatic because the north winds blow water out of the bays. Here’s the tide gauge data from that time period. 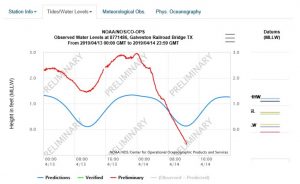 You can see how dramatically the tide dropped in just a few hours (the red line). Here’s a wind map showing the cold front that moved through.

You can see the circulation of the cold front is affecting the entire eastern half of the U.S.! That’s a big front folks. This wind map thing is really cool and you can check it out any time here.

So what does this have to do with oystercatchers? Well the high tide is a problem for obvious reasons and I was particularly worried about the nearly fledged chick on Struve Luci because if the tide was higher than the island, it had nowhere to go. Additionally a wind in any direction in excess of 20 mph can blow around a lot of water and any nest that’s around the perimeter of an island is at risk even if the tide doesn’t get as high as the nest. So I worried all weekend about “my” birds.

The predicted weather on Wednesday this week was a no go and the only day both Alan and I could change to was Monday so that’s when we went out. This had the additional advantage of allowing us to get a reef survey done and install a tide gauge in Jones Bay since the tide was still low from the strong north winds.

When I arrived at the boat ramp this is what I saw.

The tide was not only low, it was super low! I’m not sure I’ve ever seen that much exposed reef and mudflat there. I was pretty sure the boat ramp pair’s nest had overwashed and Alan had seen them both out on the reef when he arrived so it was pretty clear they weren’t incubating. One of them flew around us though and over to where the nest was so Alan walked over to check it out. He found one cold egg that was displaced from the nest scrape. Sorry guys. Try again!

We headed out to Jones Bay and got stuck a couple times because the tide was so low but we made it out here just fine. If only the tide would stay this low things would be great for the oystercatchers! Here’s FR’s former island last week and this week. Quite a difference!

We got the tide gauge set up and everything went well except that I stepped into a hole on the reef and cut a 3 inch gash into my leg. Ouch. I washed it with hibiclens immediately but I couldn’t get it to stop bleeding so we motored over to Alan’s house (how convenient!) where I was able to wash it with soap and water, put hydrogen peroxide on it, and bandage it up. I’ll spare you the gory photo but there’s one on my Facebook page if you want to see. I was afraid the bandage would come off so I taped up my foot with gorilla tape. 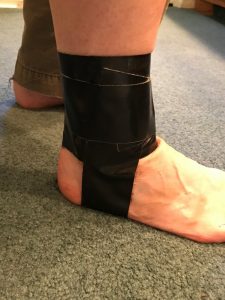 That stuff is amazing. Anyway, it was 10:00 by the time we got ready to go again. So much for an early start. Nothing was happening with the birds in Jones Bay so we headed down the GIWW to look for birds on the reefs. Amazingly there were none. I guess with so much exposed reef, they had lots of choices. Because of the low tide we couldn’t get into some areas so we had to observe from afar. The unbanded pair on the west end of North Deer was no longer incubating their nest which was good because it was time for it to hatch. We didn’t see them anywhere though. Hopefully they were hiding somewhere with chicks. H0 & JC were still incubating their nest but 23 & WY were not in their chick safe zone and just like the unbanded pair we did not see them anywhere. Hoping for the best there. YM & JH were also not visible until we got pretty close and then they popped up from some vegetation. We know their nest hatched last week so I’m guessing they were sheltering some chicks.

JJ & P4 were also missing so we went around the backside of Marker 52 where there are tons of reefs in hopes of finding some of the missing birds but we didn’t see any. Where’d my birds go? No telling with an abundance of feeding opportunities. Back over on North Deer we checked the two pairs on the east end. C1A & unbanded were acting quite suspicious and cagey and when I searched the edge of the spartina through my binoculars, I saw this! 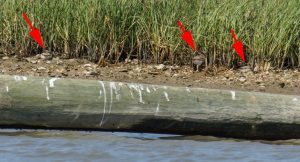 Three chicks! Woohoo! That’s a lot of work for oystercatcher parents so no telling if all of them will make it but that’s a darn good start. Alan pointed out that a bird named CIA ought to be able to keep some secrets from the gulls! We couldn’t tell what was happening with the other pair E6A & unbanded. We couldn’t get close and there were pelicans all over the place hiding their nest spot from us. We did find E6A out on a reef by himself later so hopefully his mate was incubating.

J6 & UF were enjoying their expanded island, but their egg from last week was gone as expected.

We started the reef survey on the reefs east of North Deer and found a few birds lounging but we also found YE which wasn’t good because he/she was supposed to have a nest on Jigsaw. Hum. We headed over to South Deer and found that HL & unbanded’s nest had overwashed which I had expected would be the case. It was just too low to survive that high tide. JN & UW were standing on this barrel when we arrived to check on them which I thought meant their nest had hatched but as we motored away, one of them went back up to incubate. 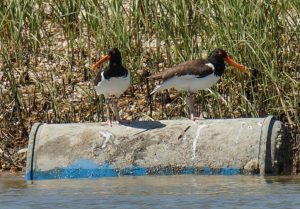 We counted the reefs around South Deer and found several of these beauties. 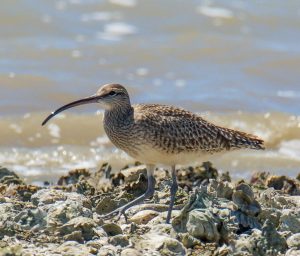 Whimbrels are such beautiful birds! It’s always a treat to see some. We also found KK asleep on one of those reefs. 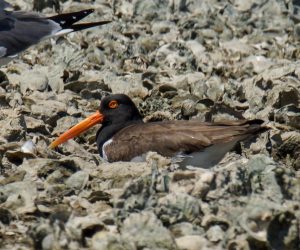 What the heck is up with that bird? He has no mate this year and he is rarely in his territory. I am baffled.

Finally we made our way over to Confederate Reef and finished the reef surveys. Gulls, gulls, gulls is all I have to say about the bulk of the birds on the reefs. The Whimbrels almost made up for it though. Once that was done, we headed over to the docks and found three hanging out there despite the low tide. I guess they were already full!

At Gangs Bayou several of the pairs were missing but we saw one of A4A & unbanded along their mudflat which last year meant their nest had hatched. In order to check that we had to go around the breakwater and that brought us to JX & unbanded which were both on the breakwater. When we got around to their territory we saw this. 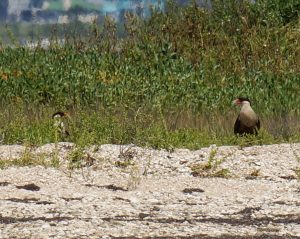 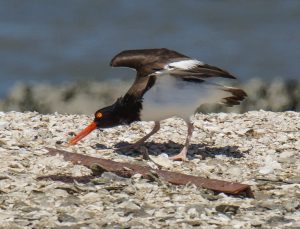 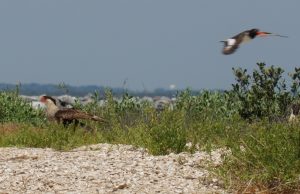 We couldn’t get close enough for me to get out of the boat and not get my leg wet so Alan walked over to run off the caracaras. You are welcome JX & unbanded! He had to go over there anyway to walk around and check on A4A & unbanded. I really wish I could have gone because in the nest scrape he saw one chick and two eggs! Sadly he hadn’t brought his camera with him so no photo guys. Sorry!

We headed over to South Deer and found LL & unbanded still acting very suspicious. We still haven’t seen their chicks but they must have some or they’d have laid a new nest by now. Y7 & unbanded were still incubating and so were XA & unbanded. Then we went to check on 16 & unbanded. I couldn’t see anyway their nest could have made it through the high tide and I was right. They were sleeping on a reef not anywhere near where their nest had been. 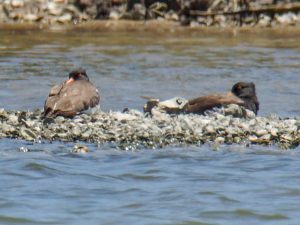 They try so hard and still fail! I hope they try again. On Jigsaw things were very unclear. LH & WW were standing along the shoreline so we knew they didn’t have a nest but I have no idea what was going on with T5 & T6 and YE & unbanded. Neither pair was incubating a nest anymore. T5 & T6 ran over to some vegetation acting like they had a chick hidden there which is totally possible but YE’s mate was also hanging out in that area and very upset at our presence. YE was out on a reef sleeping or at least acting like it was sleeping. Sometimes they do that to fake us out! It wasn’t time for YE & unbanded’s nest to hatch but it’s always possible we didn’t find it right away and I had the age of the nest wrong. When we left T5 & T6 flew out to a reef to feed so perhaps they don’t have a chick after all. That situation bears watching.

It was too windy to head up to Swan Lake so the final island to check was Struve Luci where we found the nearly fledged chick last week. I said to Alan “I almost hate to go over there in case it’s bad news” but of course we did go over there. And tada! Great news. U5U was fine and hanging out which its parents LT & JA. Phew. What a relief.

Just as good, we discovered that L9 & unbanded’s nest had hatched and they were shepherding two chicks around. Yeah!! 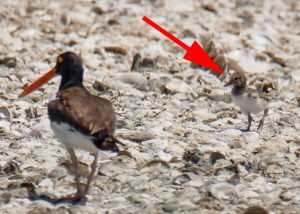 It looked like HM & X7 might have a nest on the rock wall again but we couldn’t tell. If they do I hope no predators find it! On the way back to the boat ramp we found C2A & E0A on a reef. Their island was high and dry with the low tide today. I wonder if they will try to nest on that thing again.

I wasn’t able to make it to East Matagorda Bay on Friday because the wind was too high. Hopefully that will happen Monday. For those who are worried about my leg – it is healing nicely with no infection!