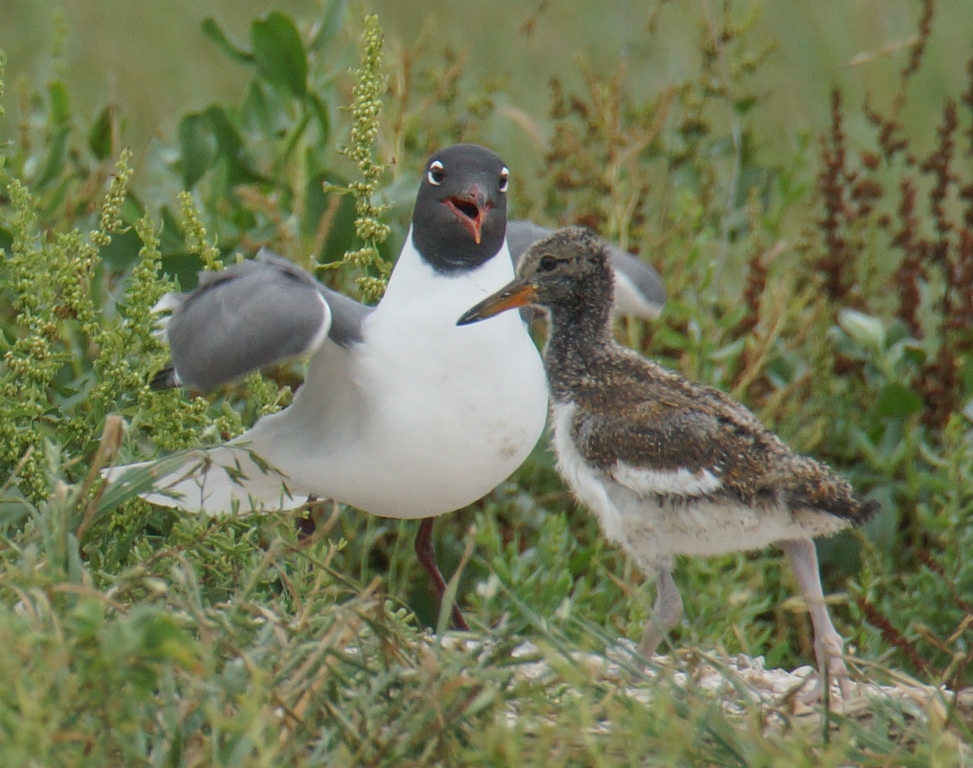 On Monday I headed out to East Matagorda Bay with Taylor Bennett and Amelia Grider, our summer Beach Nesting Birds team, and Kaitie Braddock, our intern. I was pretty happy to get out there since we hadn’t been able to get out on last Friday due to the wind. The wind forecast today was not great either but there wasn’t another option so we made it work.

We found that A7A & unbanded had a two egg nest. They were one of the few pairs that didn’t have a nest on our last outing so this was good news. Another bit of good news was that ER & unbanded’s nest now had three eggs and was still going strong. I was afraid this nest would be predated because it’s on one of the large islands along the GIWW where I have seen both pigs and coyotes. So far so good.

At Old Gulf Cut both nests had overwashed, presumably in the high tides from two weekends ago but 17 & unbanded already had a new one with two eggs. Go 17 & unbanded! Hopefully 25 & unbanded will follow suit. We made the long trek to the west end of the bay to check on LC & R9 who had two eggs on our last outing. They had increased their egg count to three (yeah!) and were incubating away. They were now surrounded by Forster’s Terns and when the incubating bird made its way back to the nest the terns started dive bombing it. That’s a rough go. 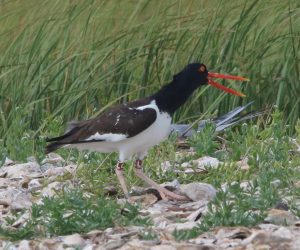 At the Oyster Farm, we found the skimmers have returned but hadn’t started nesting yet. C3A & unbanded were guarding one egg though so I guess they plan to lay more. On the other island we found LF incubating a single egg. Last time an unbanded bird was incubating this nest so I didn’t know who the mate was. I was happy to see it was a banded bird. LF previously nested on a low reef near Dressing Point where he would never have been successful so it’s good he moved. Speaking of Dressing Point – we headed there next and found EF feeding on a nearby reef. I figured we’d find his mate (M4) on a nest on the island but we searched all four sides through our binoculars from the boat and we didn’t see her. I feel certain they have a nest somewhere though. Hopefully next time we’ll be able to see it.

We went back to A7A & unbanded and discovered the unbanded bird was incubating so I set up the box trap. We had to wait a bit but eventually one of them went in and tripped the box. When I went to get the bird I discovered we’d trapped A7A rather than the unbanded one. Drat! 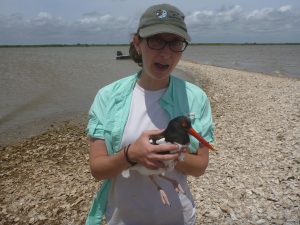 On Wednesday I headed out to West Galveston Bay with Alan Wilde, Jane Lindsey, and Kaitie Braddock. Once again the wind was supposed to pick up as the day wore on so we decided to head up to Swan Lake right away. Since we hadn’t been up there in two weeks I was anxious to see what was happening there. Although the forecast only indicated a 10% chance of rain, it was looking pretty ominous but we head out and hoped for the best. 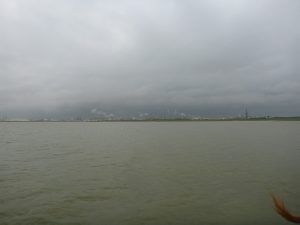 The boat ramp pair was acting like they had a nest but we couldn’t find one so we headed out the Tiki channel towards the channel under the I-45 bridge to get to Swan Lake. We noticed that C2A & E0A were on their island so we checked them out and found they had laid another egg! It only has a chance if the tide stays really low so basically not much chance. We’ll see. 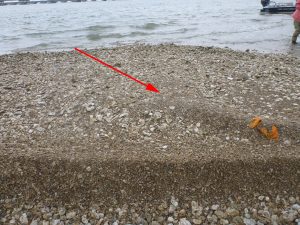 When we got under I-45 and out into Galveston Bay proper we found that the wind was already blowing stiffly from the east which pushes us right into the shoreline along the way. Because the fetch is large there, the waves were pretty high and we were rocking and rolling. 20 & unbanded looked as if they might have a nest but there was no way we could go check. We’d never have gotten the boat back out into the bay. Maybe next week. LR & unbanded weren’t home so at least we didn’t have to try to check out a nest for them. That put us into Swan Lake and I was glad to get out of the wind but dreading the ride back. We found all the pairs there but only K7 & unbanded had a nest (their third of the season). The white pelican flock is getting smaller as birds head north so maybe they’ll stop trampling nests and the rest of the birds up here will nest.

The ride back across the bay was not as bad as I feared and we hardly got wet which was good, but I was very glad to be back into the shelter of West Galveston Bay. We headed to Struve Luci and found that 12 & unbanded had a new nest too (their third as well). U5U was hanging out with its parents LT & JA and when we approached it took off and flew! Yeah! First fledged chick. Very exciting. 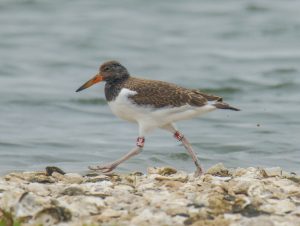 Next door two chicks were still toddling along behind L9 & unbanded. Also yeah! Maybe the skimmers are keeping the Laughing Gulls at bay. 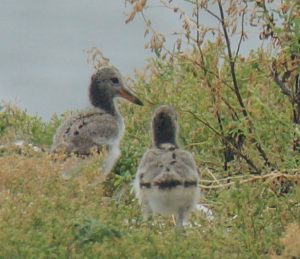 On Jigsaw things had sorted themselves out a bit. LH & WW had a new nest with two eggs. Jane noticed T5 & T6 running off gulls and we discovered they also had a new nest with one egg. I hope they lay more this time! They laid it very close to the pieces of driftwood and palm fronds we put out to give their chicks a chance to hide so perhaps they approved of our remodeling attempt. YE & unbanded were still acting strange, one of them out on a reef and the other one with rapt attention on a vegetation patch. They don’t appear to have a chick and there was no nest there so I have no idea what’s going on with them. Not the first time the oystercatchers have confused me.

We checked on 16 & unbanded next along the Galveston shoreline. We thought they had a new nest because one of them was squatting but all I found was an empty scrape. Perhaps we interrupted them during egg laying. So sorry! Pardon our intrusion and back to your business please. 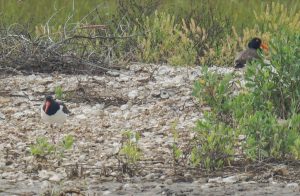 We found three unbanded birds on the docks so we moved on to Gangs Bayou. There wasn’t much happening there except A4A & unbanded were standing in the vegetation clearly guarding chicks. We knew their nest had hatched because Alan found a chick and two eggs in their scrape last week so the only question now is how many chicks are there? Hopefully they’ll give us some clues before its time to band them because those chicks are very hard to find since we have to go around the breakwater and approach them blind. 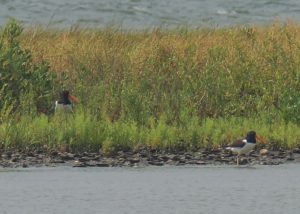 Over on South Deer we found that KK was back in his territory and he wasn’t alone! Maybe he’ll start acting more like an oystercatcher now instead of a wandering vagabond. They hadn’t laid a nest yet but I’m betting they will have by next week. 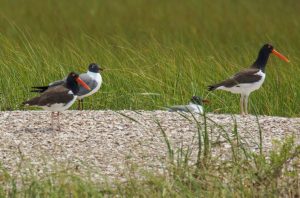 It was time to band LL & unbanded’s chicks but it wasn’t clear that they had any. They weren’t acting like it and we searched but didn’t find any. I wouldn’t put it past them to appear with a fledged chick next week though. We’ll see.

Y7 & unbanded and XA & unbanded were still incubating their nests. JN & UW were standing on a different part of the island then where their nest had been. It was time for it to hatch so I was hoping they’d marched some chicks away from the gulls and terns but we didn’t see any. That doesn’t mean they don’t have one though! 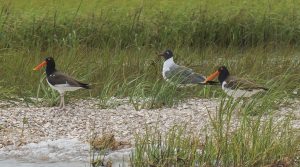 HL & unbanded had a new nest with one egg (their third try as well). On North Deer it was clear that E6A & unbanded’s nest had failed but we saw two chicks with C1A & unbanded. The third one may have been there as well but we didn’t see it this time. 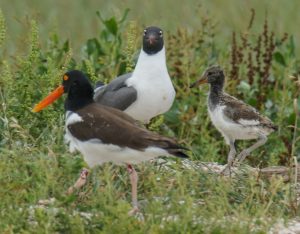 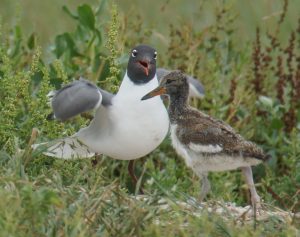 I thought YM & JH’s nest had failed but then I spotted this. 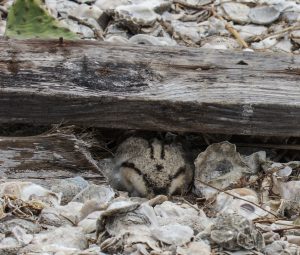 Yeah! Then we spotted this in by the unbanded pair. 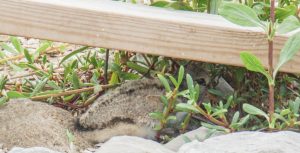 Yeah again! Lots of chicks on that island. W5 & unbanded seemed underwhelmed by it though as they were both sleeping along the shoreline. Perhaps the competition is too much for them.

J6 & UF had laid a new nest too and it’s on the highest spot on their tiny island. Good choice UF! It doesn’t have much of a chance but maybe they’ll get lucky.

On Marker 52, JJ & P4 were acting like they had a new nest but they didn’t. Alan had been out kayaking over the weekend and noticed a strange bird in WY & 23’s territory. Today we discovered not WY & 23 but Y5 & 23 in that territory. What happened to WY? We did not see either of those adults last week and the week before they had a chick so something must have happened to him two weekends ago when we had all the bad weather and high tides. Perhaps as I theorized with P3, he was defending his chick and it didn’t end well. He was banded as a chick in 2013 by the boat ramp. Sadly he did not make the average life span of 10-15 years for oystercatchers.

H0 & JC were not only not incubating their nest but we didn’t see them anywhere. What happened there? 28 & AP had a new nest with one egg off to the side of a large colony of Royal and Caspian Terns. The terns seem to be laying their eggs in concert with each other.

We found ET & A8A way down the GIWW on a large island where they’ve tried unsuccessfully to nest a couple of time. Their small island was nearly underwater so perhaps they are considering their options. It was still early so we headed farther down the GIWW to check on XE & unbanded. We haven’t checked on them in several weeks because they are out of the regular monitoring area. Today we found they had a new nest with one egg. I guess we’ll have to keep an eye on that now!

Back in Jones Bay nothing much was happening. We didn’t see CA & Y2 and FR & unbanded didn’t have a nest despite the fact that Alan had seen them running off gulls over the weekend. Perhaps the gulls had already gotten their egg. We did find H0 & JC on the backside of Marker 52 where we’ve never seen them before. They were most unhappy that we had discovered them. They hadn’t laid a nest over there so I wondered if they had a chick. We didn’t find one but you never know.