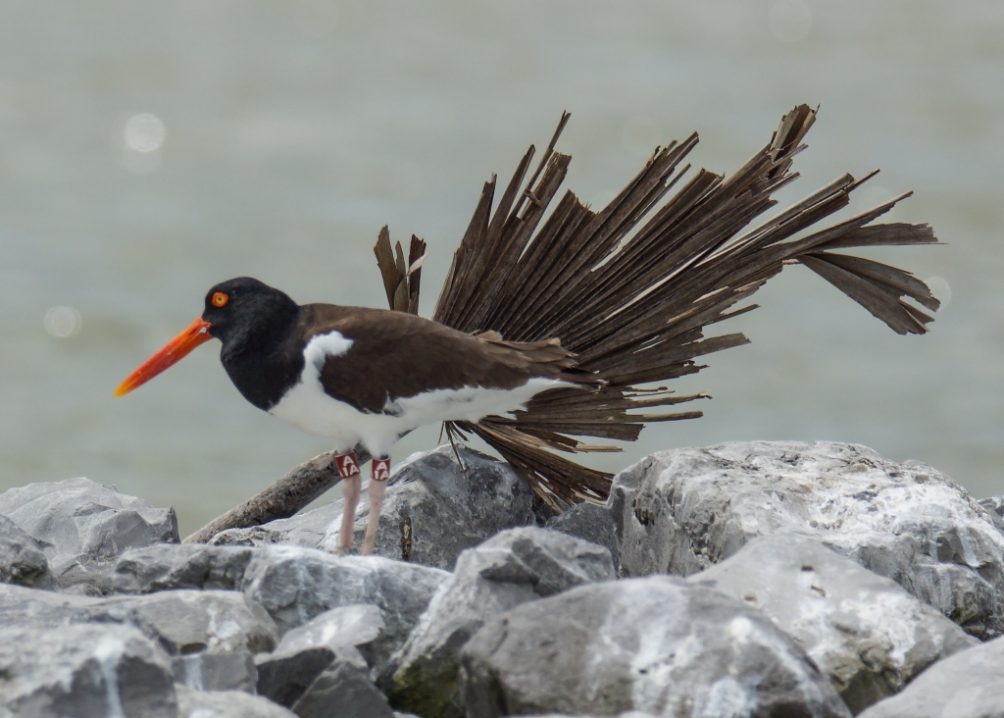 WIND. That is the defining word for the past week. The wind was blowing 20+ mph every day until Friday so needless to say we couldn’t go out to check on the oystercatchers until Friday. This meant I had to combine two days of work into one because I was scheduled to monitor Black Skimmers and do colonial waterbird surveys in West Galveston Bay on Friday. The strong winds had created very high tides in the bays (and on the beaches) of 3 feet or more and I was worried about the chicks that hadn’t fledged yet. The wind was still blowing at 16-18 mph on Friday but that is manageable if you are careful so we headed out with high hopes early Friday. I was joined by Alan Wilde, Amanda Hackney (BlackCat GIS), Kori Lugar (U of H undergrad), and Marlynn Miller (master naturalist).

We didn’t see the boat ramp pair but one member of the Tiki channel pair was on the tiny scrap of their island that was above water. 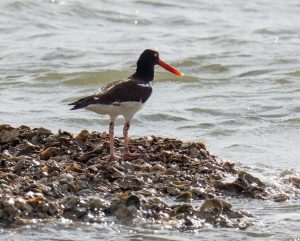 I had brought some driftwood to put out for T5 & T6 so we headed to Jigsaw to get it off the boat. If you’ve been following along you’ll remember that we put out some driftwood and palm leaves to give T5 & T6’s chicks a place to hide should they have some. The birds appeared to like it and when their first nest failed they laid their second nest among the driftwood. Sadly that nest and the driftwood were washed away but I figured they might try again thus the pile of driftwood taking up a lot of space on the boat. When we got there, we found they had already laid a new egg! We put the driftwood and palm leaves near the nest and left them too it. 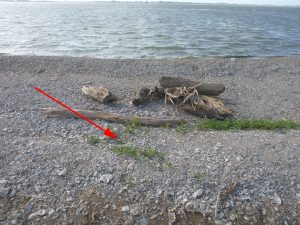 I hope they like our remodeling job! Nothing was happening with the other two pairs on Jigsaw so we headed to Struve. I was anxious to see how the chicks there were doing. We saw L9 with one chick (U5Y) but not the other adult or chick. I feel pretty certain they were off somewhere together as the chicks should be able to fly at this point and I’ve seen that happen before when there is more than one chick. Each adult takes one under their wing (literally sometimes!) and takes it off on short forays to show it the good eating spots I guess. Hopefully we’ll see the other chick next time. 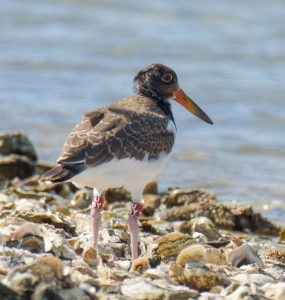 The skimmers seemed to be doing ok even with the high tide but when I counted them there was less than 500 and last time there had been more than 600. Clearly a few left. We saw a few of the other oystercatchers that belonged on Struve but they were all loafing. JA was there but her mate LT was off somewhere with their chick U5U. HM was by himself on a dock and I’m hoping his mate X7 wasn’t on a nest in some unsavory location. They have the lowest part of the island and they keep trying to find a better spot with no luck.

I really wanted to go up to Swan Lake so we could see if LR & unbanded’s nest made it through the tides but I wasn’t sure if we should because of the wind. The problem with that site is that when you’re going up there, the wind is at your back so all seems fine, but when you’re heading back you have to head right into the wind and what seemed like perfectly fine water on the way up there becomes very rough on the way back. I decided to chance it and we headed up there. We were rewarded with seeing a bird incubating LR & unbanded’s nest among some Brown Pelicans. 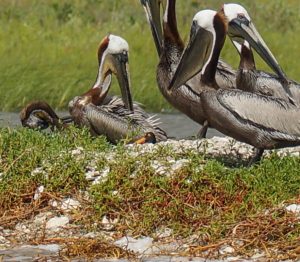 Yeah! It was too rough to land the boat and see how many eggs they have. Maybe next time. Seems like I’ve been saying that every week this year. Ach with the wind! We went into Swan Lake proper and counted the nesting herons and terns for the waterbird survey and then it was time to head back to West Galveston Bay. It was pretty rough and we got soaked with spray but of course we made it. I was pretty glad to get back under the I-45 bridge and into the relatively sheltered part of West Galveston Bay.

We went to check on 16 & unbanded along the Galveston Island shore but they were nowhere to be found so we headed to South Deer. HL & unbanded were standing in their usual spot. Ditto JN & UW. XA & unbanded were hiding behind some spartina but they flew out when we approached and headed to another part of the island. Y7 & unb were not on their territory so I guess it’s time to face the fact that their nest failed. I was still holding out hope but no dice. We didn’t see LL & unbanded until we got close and then LL popped up from behind some vegetation. Suspicious behavior but I didn’t find a nest anywhere there. I hope they lay a new one though. They have a good spot if the wind would ever die down. Crazy KK was huddled down in his territory alone again. I’ve never seen an oystercatcher have so much trouble keeping a mate.

We headed to the Sportsman Road docks but there were no oystercatchers there so we went to the Gangs Bayou breakwater. We found A1A sporting a new look. Peacock oystercatcher? 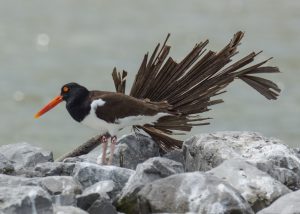 Next we found A4A and unbanded, the pair whose chicks we had hoped to band last week but found they had disappeared. I asked them what happened but of course they didn’t answer me. I wish they would! It will forever be a mystery what happened to their chick(s). 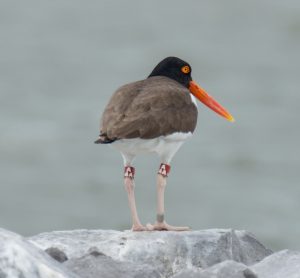 There weren’t any other oystercatchers there so we headed down the bay to count skimmers. I figured most of them had been overwashed but there were some hanging in there. We checked Carancahua Cove which is at Galveston Island State Park. There were twice as many skimmers there this time as last time and a few more nests so I guess they were doing ok. There were also two oystercatchers but they weren’t a pair as they were on separate islands and pretty far apart.

Next was Jumbile Cove. There were fewer skimmers there than last time but more appeared to be on nests. At McAllistar Point where there had been over 90 skimmers last time, we found only three so those islands took a big hit with the high tides. Sorry guys.

We headed to Bay Harbor which is a larger island and had a lot of Royal Terns last time but no skimmers. This time was a different story. There were over 100 skimmers there. Perhaps some of the ones that got overwashed moved there. We once again didn’t see the oystercatcher pair that nests there. We anchored in three spots around the island so Amanda could count all the other birds for the waterbird survey. At the second anchoring spot I was checking out a small area covered with gulls and I noticed a bird trying to land that didn’t fit with all the others. It took me a minute to realize what it was, a Sooty Tern. Sooty Terns are a pelagic species that are a rare breeder along the central and lower Texas coast. Apparently they used to breed in Galveston County but not since the 1940’s. Just about the time I was getting the words out of my mouth Amanda saw it too. The bird never fully landed but instead flew up and began circling the island with a second Sooty Tern. A pair! Alan tried to get some photos but they circled the island only a couple of times and then disappeared and we couldn’t find them again. Well that was certainly exciting! You can bet I’ll be looking for them when we go count skimmers again in two weeks.

Alan got some really cool photos of the nesting terns there.

We headed across the bay to Alligator Point. We didn’t find the oystercatcher pair there or the one on Alligator Point Island but it was pretty rough and the boat was really rocking so I was thinking we could have missed them. When I checked my email at home that night I found that Joe Kennedy had seen the banded bird from the island at Bolivar Flats on Thursday so clearly that pair doesn’t have a nest or chick. We headed to sheltered waters in the GIWW by the mooring facility. I was hoping to verify that the chick we banded there two weeks ago had fledged but that pair wasn’t there either. Hopefully they were just off showing their newly flighted chick around the area. We did find this however.

We decided it must be the nesting colony where all the buoys come from! We were all getting pretty tired at this point…

Anyway, we continued up the GIWW towards Tiki Island. Neither XE & unbanded or ET & A8A were home so it was time to check and see if the chicks on North Deer were ok. We didn’t see the unbanded pair when we first got to their territory but as we got closer, an adult popped up from behind a spartina patch and I saw the chick run up the berm and into some vegetation. It should be able to fly now but perhaps with the high tides, the adults haven’t been able to feed it very well and it hasn’t developed as fast as it should have. I was relieved to know it was still alive.

Next was YM & JH. We found them together with their chick sleeping on a washed up board. It stood up when we got close. It didn’t look like it could fly yet either but again, at least it’s still alive!

The final pair with a chick was C1A & unbanded and their chick U6U. We didn’t see them at first either and then C1A popped up from behind some vegetation. We didn’t see the chick with him but finally it popped up too. So good news! All the chicks there made it. Hopefully the tide will go down soon and they can all have a feast to celebrate. 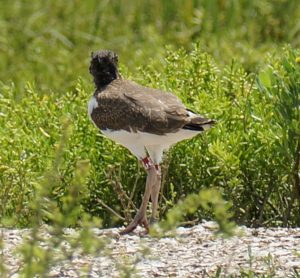 We still had a few pairs to check but none of them had anything going on. Oddly FR & unbanded were in 23’s territory and not on their island in Jones Bay. Earlier in the season 23’s mate WY disappeared and we’ve seen 23 hanging out with several different birds so we aren’t sure what is happening there. Today 23 must have been off somewhere perhaps finding yet another bird to woo and bring back home. We ended the day by checking out the cute Caspian Tern chicks in Jones Bay. You can never see enough fuzzy tern chick photos can you? 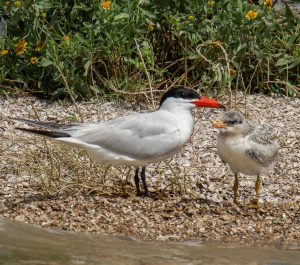