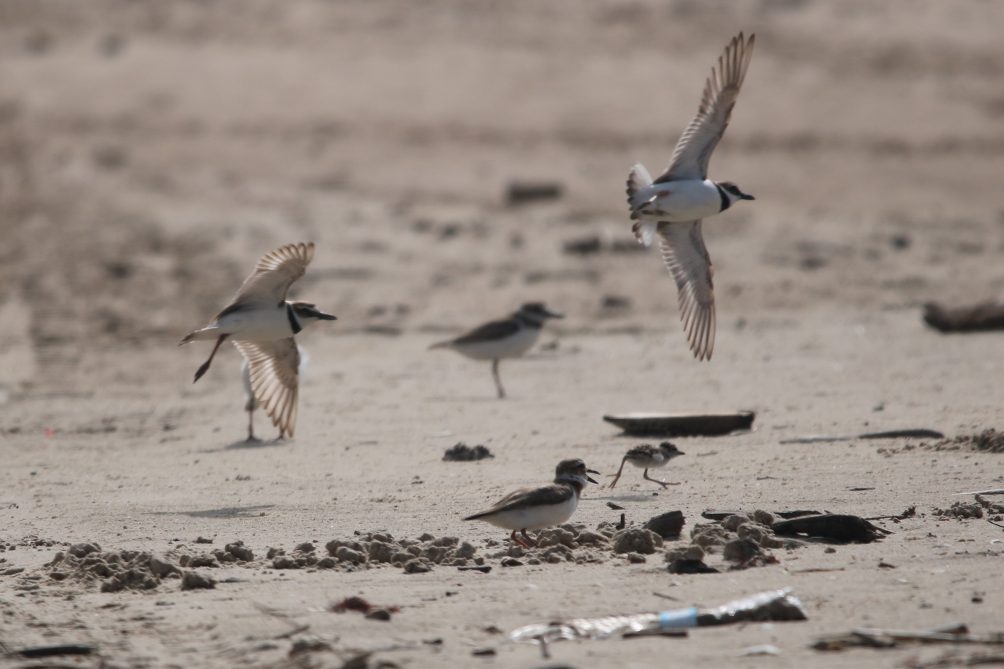 The Wilson’s Plover is a type of shorebird that breeds along the Texas coast. It is not federally protected currently, but it is definitely a species that we should be more concerned about due to its population decline. It is considered threatened and endangered in some parts of the U.S., but because the majority of the population nests in Texas, it is not state protected here. However, due to habitat loss and its vulnerability to climate change and disturbance, it is a species of high concern. Gulf Coast Bird Observatory is one of the few organizations that is helping to protect and monitor this particular species of shorebird.

Gulf Coast Bird Observatory monitors two specific areas along the Texas coast: Bryan Beach and Matagorda Beach. The nesting habitat varies by location due to high disturbance and habitat erosion in some places. The Wilson’s Plovers at Bryan Beach have little beach habitat, so they tend to nest in the back of the dunes near mudflats which protects them from human disturbance, but puts them at greater risk of being hunted by coyotes and feral hogs. The Wilson’s Plovers at Matagorda Beach prefer nesting near the dunes in sand and some nest in the algal flats near the Colorado River mouth flats located near the beach access entrance. Both populations prefer a little bit of vegetation.

Shorebirds are very different from other birds like cardinals or robins. Instead of nesting high in trees protected from any ground predators, they nest on the ground making them more vulnerable. Also, almost all shorebirds are precocial meaning that when the chicks hatch their eyes are wide open, they are fully covered in down, and they are able to walk, run, and feed for themselves soon after they hatch versus other bird species which are blind, bald, and rely heavily on the parent for food.  The only thing that the chicks cannot do is fly, so they rely on camouflage and the parents for protection.

April through August is the most vulnerable time for Wilson’s Plovers and other shorebirds. Their nests and chicks are susceptible to predators, weather, and people. So during this vacation season, please think of them when you and your family are trying to enjoy the beach. Drive slowly and be on the lookout for tiny chicks and plovers within the tire ruts and wrack where they tend to hide. Try to avoid the dunes and sandy areas where plovers tend to nest. Please be mindful of your children and pets and keep your dogs on a leash. Plovers do not know the difference between dogs and coyotes. Also please pick up any trash and debris: The birds and visitors will thank you. On behalf of Gulf Coast Bird Observatory, we wish you a fun and safe summer vacation on the beach.