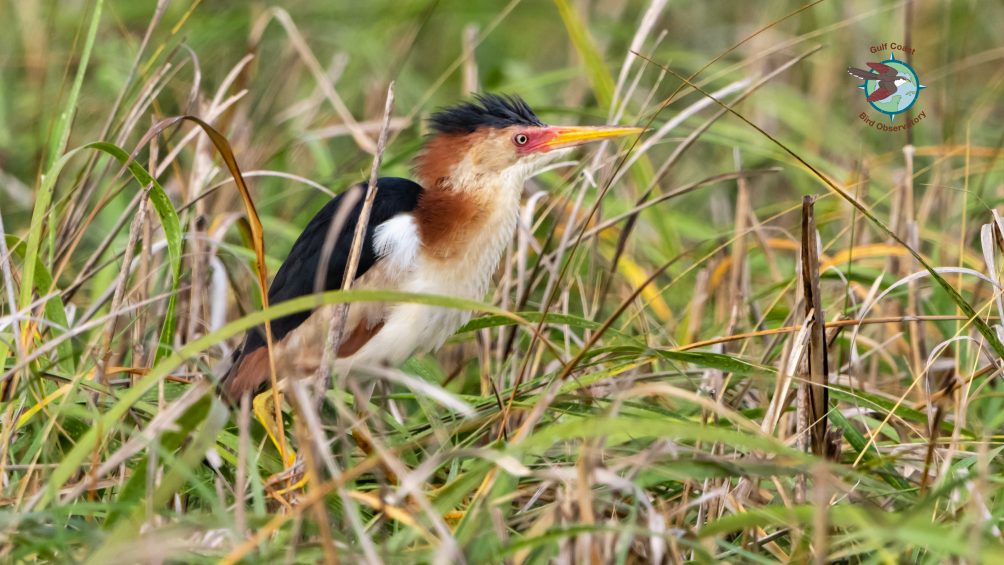 In Texas, Least Bittern (Ixobrychus exilis) is common summer resident along the Coastal Prairies and the eastern portion of the Lower Rio Grande Valley. Inland, they are rare to locally common in the eastern third of the state. In the western portion of the state, it is a very rare and local summer resident due to lack of habitat. During the winter, a few may stay as a winter resident in the Coastal Prairies. Early spring migrants begin arriving by late March and by late October they have migrated south for the winter. Least Bitterns can be found across the eastern half of the United States as well as in isolated areas of the West which have good habitat. They nest in freshwater and brackish marshes with tall aquatic vegetation such as cattails and other reeds and rushes, preferentially in places interspersed with patches of open water and small stands of woody vegetation. Least Bitterns eat mainly small fish such as minnows, sunfishes, and perches. They also eat small snakes, frogs, tadpoles, salamanders, slugs, crayfish, other crustaceans, shrews, mice, dragonflies, and leeches. Their ability to work the reeds allows them to feed in water deeper than that utilized by many of the egrets and herons.  Least Bitterns typically hunt alone while perched at the edge of a stand of reeds, watching for prey. Their movements are slow and deliberate when walking or climbing, and they frequently grasp reeds with their feet when moving about above the ground.

Least Bittern is a member of the Ardeidae Family (Bitterns, Herons, and Egrets) that is comprised of twenty species in the American Birding Association area. Least Bittern is identified by its overall pale yellow-buff coloration with a black cap and black back. The shoulder has a white line and the throat is lighter with buff colored stripes. The eye, bill, and legs are yellow. While in flight, the remiges appear to be dark and the coverts a bright buffy color. Typical weight is 2.8 oz. or 80 grams. They are frequently located by their song which is a low “coo-coo-coo”. Their call is a low “Grah-ah-ah”.