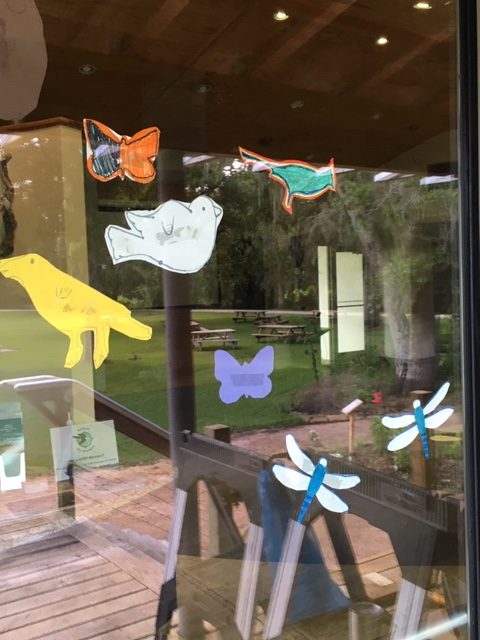 Summer bird camp at the Gulf Coast Bird Observatory just wrapped up its eighth year of engaging children ages 8 to 11 in fun activities related to birds, nature, and wildlife. This year’s campers enjoyed going on bird hikes, participating in bird banding, catching wetland insects, going to the beach, and more. Learning about birds isn’t always joyful, though: the reality is that birds face a number of challenges that make life difficult. The kids learned this firsthand as they tried to “migrate” from one end of the room to the other during a life-sized board game. Just 40 percent of them made it.

The others encountered trouble in the form of disease, striking windows, getting attacked by cats, or encountering a reduction in suitable habitat. But we didn’t just discuss the threats birds face, we also brainstormed ways to alleviate them. One project we took on was designed to combat bird’s striking windows. Too often, birds fly into windows when they see their habitat reflected in them, leading to billions of bird deaths each year. As a solution, we used stencils to draw and then cut out decorative shapes to put on the windows to break up the reflection and alert birds to the presence of an obstacle.

But the kids wanted to go one step further. They decided it would be nice if other people were aware of the many threats birds face as well so more of us can take steps to help them. Because as we learned on day one, along with bringing us beauty and joy, birds serve a number of valuable ecosystem services such as distributing seeds, pollinating plants, alerting us to dangers in the environment (think “canary in a coal mine”), and perhaps most appreciatively here in the land of the giant mosquito: free, efficient, and harmless pest control.

So this is what the kids want you to know, in their own words:

These are tips we would all do well to follow. For the birds, yes, but also for the children who will be inheriting this world when we’re gone.