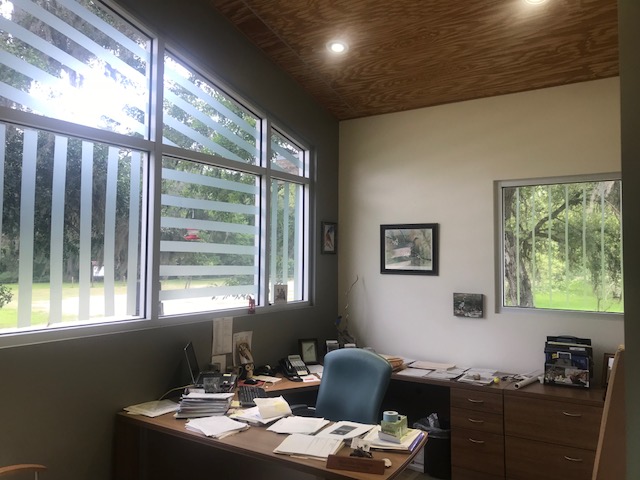 The GCBO headquarters building in Lake Jackson, TX is a wonderfully set building on 34 acres of Brazoria bottomland forest along the Camp Buffalo Bayou. Beautiful green forests surrounded by water.  Even though right off Hwy 332 and just outside town, it feels and looks like you are far into nature.  We enjoy these ground every day, as well as the many birds visible from our office windows!

Windows allow us sunlight and a view into nature.  We all need that to survive and live a nice healthy life.  But all those windows have come with a cost… bird strikes. It is estimated that window strikes by birds cause over one billion bird deaths per year in the U.S. alone!  That’s a huge number.  One billion!  Birds don’t see the glass, thinking it’s an opening to fly through.  Often the window is giving reflecting views of trees and it looks natural to a bird.

Tall buildings in cities that leave lights on at night attract migrating birds which contributes to the massive number of window strikes there.  But smaller business building and private homes also contribute to the large number or birds that fly into windows.   Although we have not had a huge number of birds striking our windows here at GCBO, we have had several, and any bird strike is one too many.

So we have finally taken steps to stop more bird fatalities or injuries. Through an initial donation of BirdTape from the American Bird Conservancy, and an additional purchase of more we are now becoming bird strike free.   This semitransparent tape is applied to the outside of windows and break up the “open space” that birds perceive as a flight path.  At first it might be distracting for us humans, and may not give quite the same view out, but we are quickly adjusting and we are still watching nature and birds through our windows no problem!  It’s an easy solution, and not super expensive.

We have some wonderful volunteers here at GCBO, Harold and Sheryl Travis, that have been applying the BirdTape for us.  It requires some work, especially on a large building like ours with so many windows, but it’s a task we should all be able to do.

Birds that strike windows often die instantly, but some are stunned and fall down “out cold”.  Some of these birds seem to recuperate and fly off in a while.  And while that seems great, they often have internal injuries that lead to death later.  If you can pick up a stunned bird, place it in a dark box, and transport it to your nearest wildlife rehab fatality it will have a much better chance.  Let them go over the bird to make sure its fit to be released.  Also, do no try to feed it or give it water, as this can injure the bird future.

We can all do things to alleviate the obstacles and dangers to birds that we have created.  This is an easy one!  Join us in becoming bird strike free!