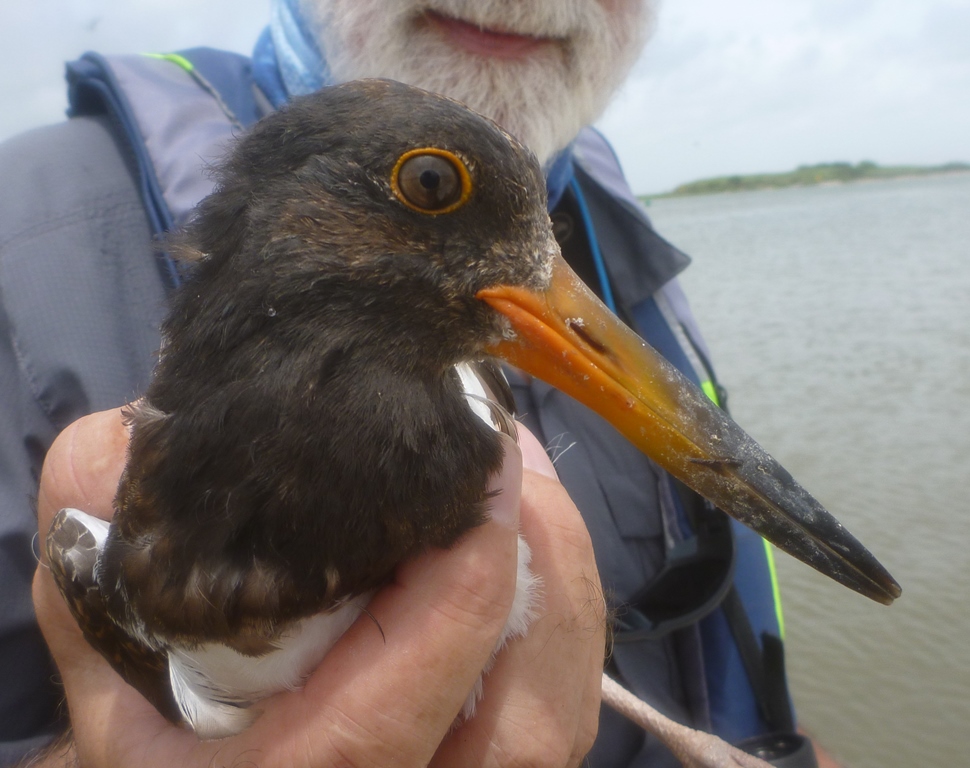 I had some non-negotiable commitments on Tuesday and Wednesday this week which of course were the two days with the best weather. It was a tossup between Thursday and Friday. Neither looked very good from a wind perspective but Alan and I made a go of it on Friday. It was too rough to go check on LR & unbanded’s nest up near Swan Lake so we headed across the bumpy bay towards Struve Luci. The tide was down a bit for the first time in months and we found C2A on a reef along the channel and his mate (E0A) on their tiny scrap of an island. Did they lay another nest? They might actually be able to make it if they lay one now as the winds are due to die down taking the tide with them with the summer solstice behind us. They hadn’t though so we moved on.

All the pairs were present on Struve Luci and L9 & unbanded were on a reef with their chick U5Y.

LT & JA were without their chick again and Joe Kennedy reported seeing it on Frenchtown Road along the Bolivar Peninsula so I guess U5U is truly on his/her own now. It’s kind of sad to not see it anymore but what a great thing that it made it! Any chick that survives in this year of high wind is a wonderful thing.

The skimmers are still doing well there and Alan got some photos of some pretty large chicks. I guess some of them will be fledging soon! 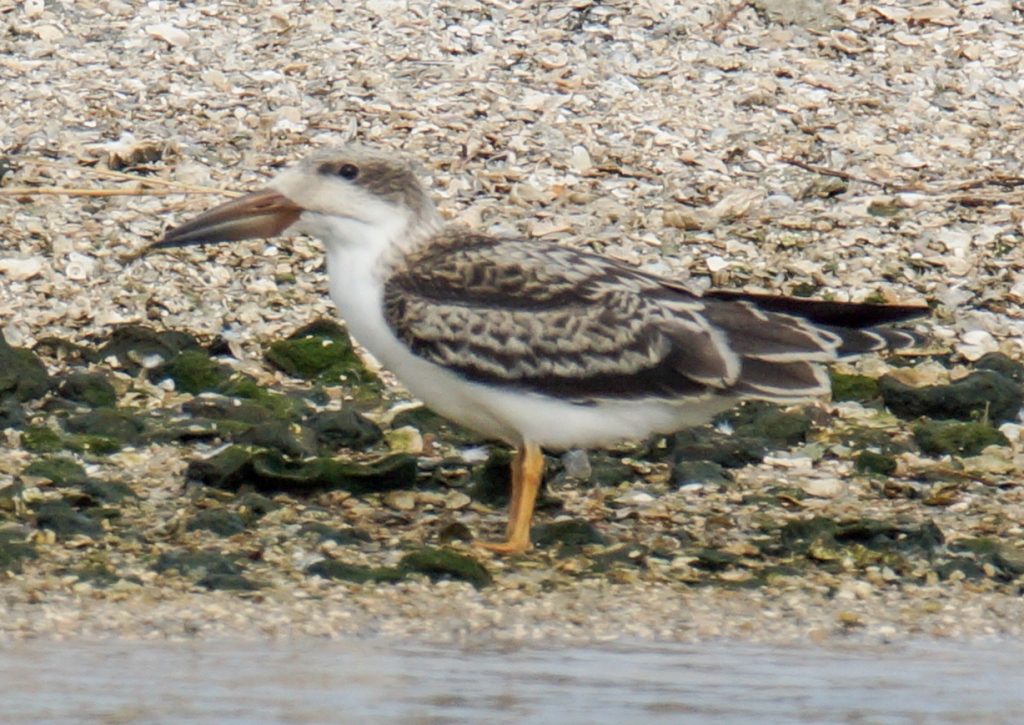 We moved on Jigsaw. I was really hoping that T5 & T6 would have a new nest but they weren’t in the area where they have laid all of their nests this season (three so far). We got closer to check out YE & unbanded and out of the corner of my eye I saw a bird walk down from an area on the main island where T5 & T6 used to nest before the gulls and terns moved in. Could it be? There aren’t any gulls nesting there this year and the terns have all moved off to other areas so I walked up and found this. 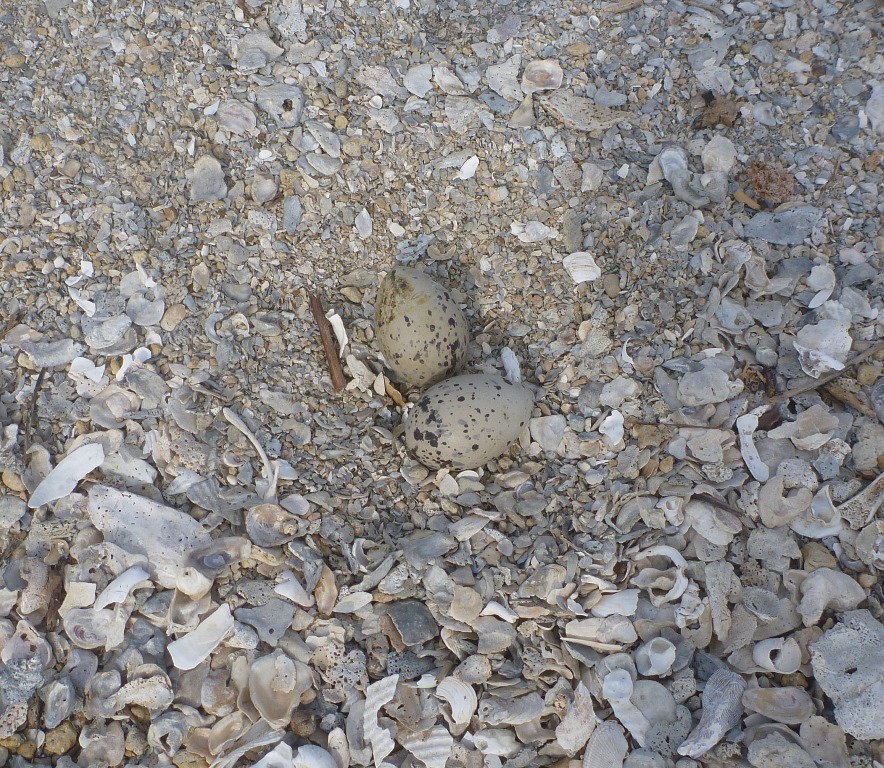 Yeah two eggs! My heroes! That made me very happy. They haven’t given up yet so I guess I shouldn’t either. YE & unbanded didn’t have anything going on but one of LH & WW was standing in the area where they had their nest that failed so I went to check. There weren’t any eggs but there were two scrapes. Maybe they will lay another nest too! We went back around to see if we could catch T5 or T6 incubating and sure enough one of them was incubating away. 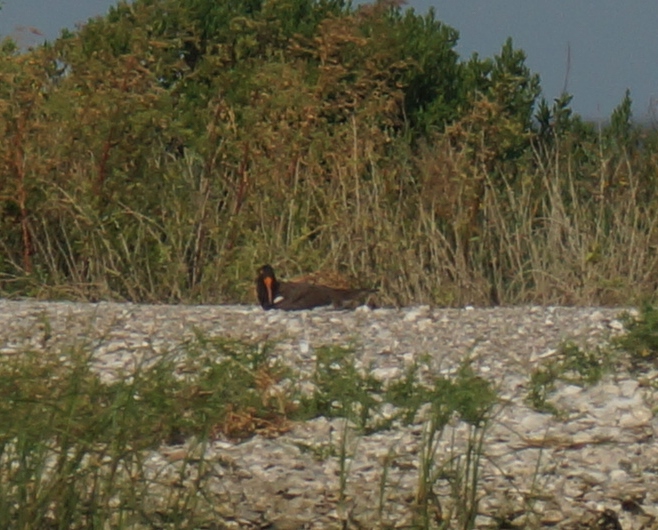 We motored over to check on 16 & unbanded but they were just standing along the water’s edge so nothing going on there. There weren’t any birds on the docks either so we continued on to Gangs Bayou. There was one pair on one of the mounds behind the breakwater but we couldn’t tell who they were. A1A & unbanded were on the breakwater itself and A4A & unbanded were standing along the shoreline. Nothing happening. There was an unbanded bird in JX & unbanded’s territory so we went over to check it out but I didn’t find a nest despite the bird’s agitation at our presence.

We headed down the bay to count skimmers in Carancahua Bay and at Bay Harbor, the other two spots where there are some that haven’t gotten overwashed. Since the tide was lower we got stuck a couple of times and I realized I’ll have to learn my way around these areas all over again with the tide low! At Bay Harbor the skimmers had all moved around to another side of the island so they must have gotten overwashed where they were and had to start over.

When we got back up to the east end of the bay, we went to South Deer. KK was back in his own territory but he was alone. I have no idea why he can’t keep a girlfriend. There wasn’t anything happening with any of the other pairs there so we headed to North Deer.

We saw one of E6A & unbanded for the first time in a long time and when we motored in to have a closer look the other one appeared from somewhere. The wind was blowing too hard for us to go check things out and we had a hard time getting out of there as it was. C1A & unbanded were hanging out in a gaggle of pelicans and gulls and their chick wasn’t with them so there’s another one that is off on its own already.

I was a bit afraid to go check on YM & JH’s chick U5X. The photos from the previous weeks showed a large sore on its foot. When we banded it, it had a sore that looked like it was from a cactus spine which made sense because when it was young we saw it hiding in a prickly pear cactus a couple of times. Over the intervening weeks the sore had gotten larger and looked pretty nasty. I thought maybe that was one of the reasons the chick is taking so long to fledge so on the advice of a rehabber, I recaught it last week and took a look. It looked like the spine was still in there so I squeezed at the base of the sore like the rehabber advised. This caused the whole scab to pop off with the spine in it. I was glad the spine was gone but the chick now had a large open sore on its foot. I slathered it in antibacterial ointment and let it go but I worried it would get infected. Today when we pulled up, both adults were there and the chick looked just fine so I was greatly relieved. 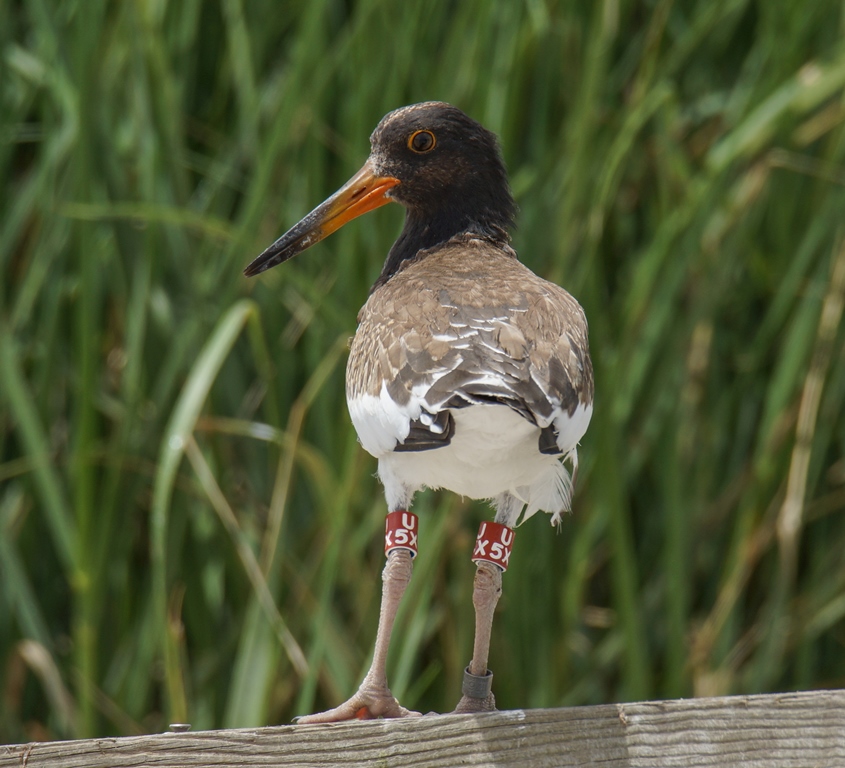 It still can’t fly but was again making short hopping flights that were longer than the last we saw it. Encouraging. I wanted to take a look at the sore again so I caught it again much to its dislike. I was very happy to see that the sore is completely healed! Yes! The primaries are completely grown in as well so I think all it needs is to build up some muscle strength to be able to fly. Maybe next week? 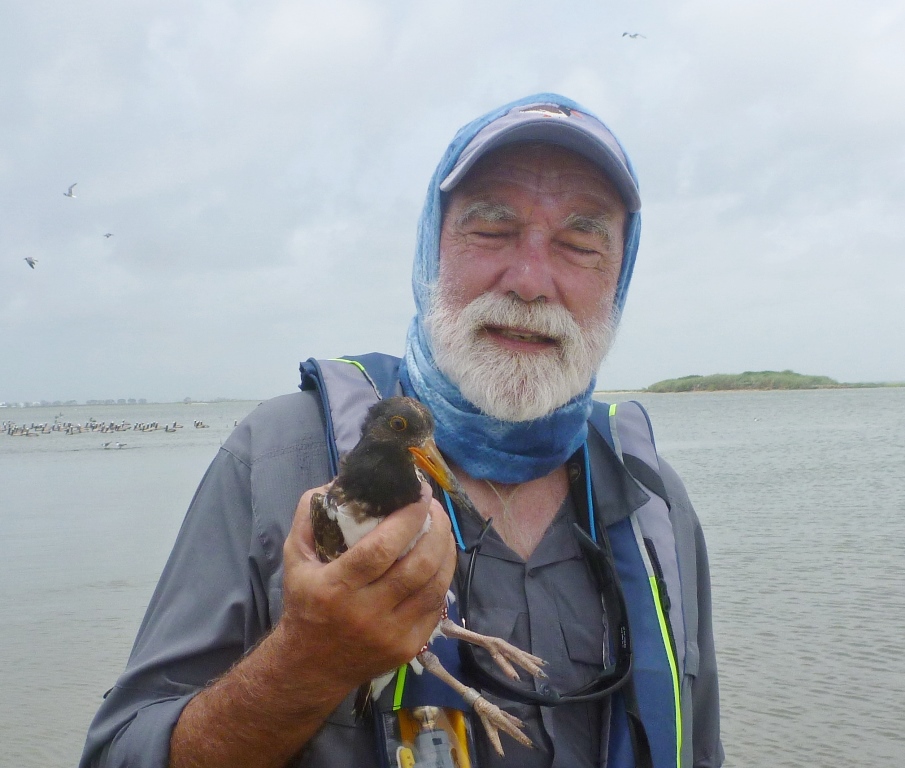 We motored over to Marker 52 and checked on the pairs there. JJ & P4 were not home. Y5 & unbanded and H0 & JC were both hanging out with nothing going on but one of 28 & AP was laying down on top of a shell ridge as if on a nest! The wind was blowing us right into the island so we needed to check it from the other side though so we put that on hold while we went to check on the unbanded pair’s chick on the other end of North Deer. Both adults were there for the first time in a long time and the chick was with them. It ran up to the ridge like it was going to hide so I guess it can’t fly yet either. I took it as a good sign that both adults were there though. That probably means they are able to get food close to home which also means they can stuff that chick full of goodies and it will fledge soon. 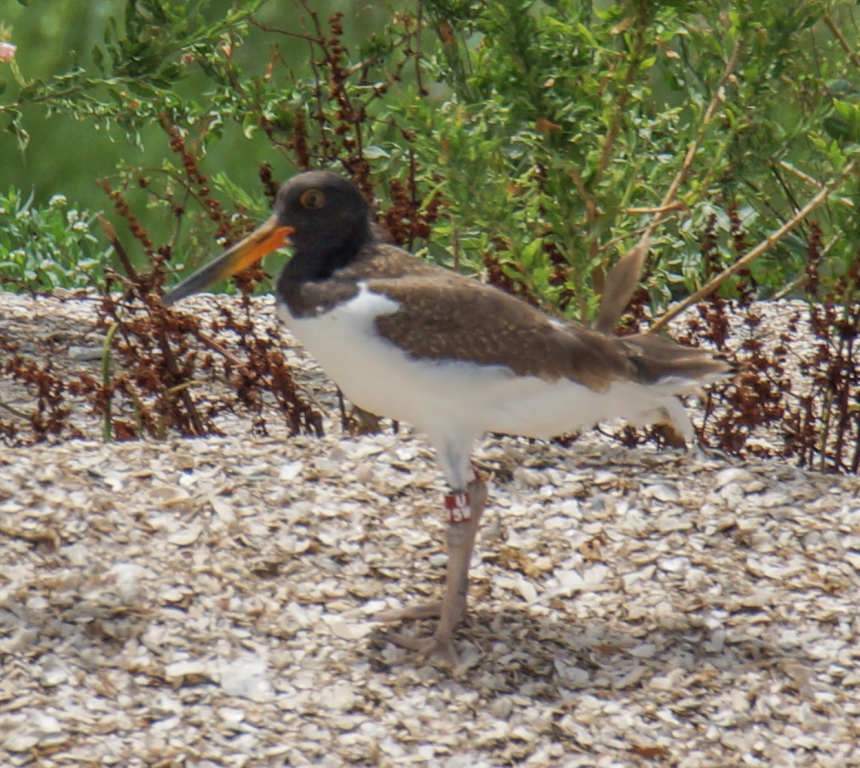 We headed over to Jones Bay where we could check on 28 & AP from the other side of Marker 52. Their entire area had been covered with terns but they are all done incubating now and the chicks are in a crèche along the water’s edge.

I guess the oystercatchers were just waiting for the terns to vacate because they were incubating one egg. Another nest!!! Maybe we will have some more chicks this year after all. There wasn’t anything happening in Jones Bay except we found Y2 in one spot on the breakwater and CA with an unbanded bird on another spot on the breakwater. Trouble in paradise?

Next week I’ll go to Drum Bay and check on the chick that we found there a couple of weeks ago. Fingers crossed!