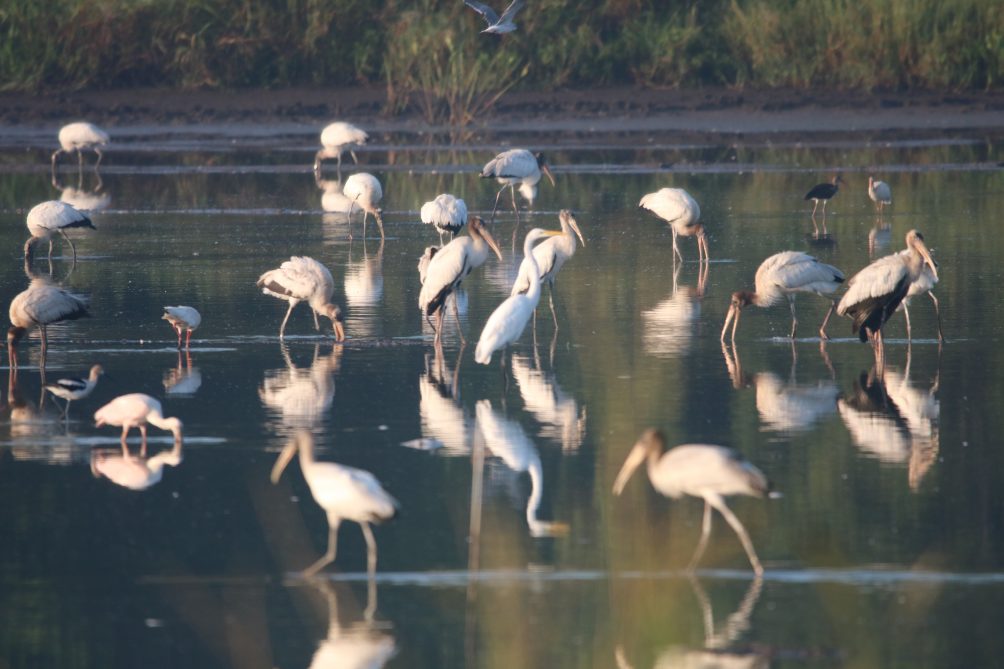 It’s that time of year again when it takes something pretty cool (pun intended) to get me outside on the weekend. Since I spend a good part of my work days outside, I’m pretty fond of sitting in the air conditioning on summer weekends. But there is one bird that’s worth looking for and I’ve just started to see reports of them showing up along the Texas coast. What am I talking about? Wood Storks, that’s what. This is a bird that is worth taking on some heat to see simply because they are so odd looking. It is a big white bird similar to the Great Egret only bigger. Their most distinguishing characteristic is their featherless neck and head which has earned them the nicknames ironhead or flinthead. This is a face only a mother could love. They have a long slightly curved bill. If you happen to see some in flight, you’ll see a big white bird with black on the trailing side of their wings. They soar like pelicans and can sometimes be seen in very large flocks. There are almost always some at the coastal wildlife refuges or the crawfish ponds on FM 521 at Live Oak Bayou.

You can find them just about anywhere there are drying up ponds and that is because they depend on this type of situation to feed because it concentrates the fish. They wade around with their bill open in the water and when their beak touches a fish, it automatically snaps shut. Then they simply gulp down the fish without ever even seeing it. Because of their feeding style, Wood Storks follow drying wetlands throughout their lives. Although this species breeds in southeastern United States, they don’t breed in Texas. The Wood Storks we get in Texas are from Mexico and Central America. Summer is the wet season in those areas, so the Wood Storks come north to take advantage of our dry summer where they concentrate in drying up wetlands. In the late fall, they head south again and breed in the drying marshes and swamps of the tropics. If the dry season is too wet because of unseasonable rains, the storks may not be able to feed their chicks and whole colonies can be abandoned with no chicks fledged that year.

Due to the destruction and degradation of wetlands in the southeastern United States, the only place where Wood Storks breed in the United States, this species was listed as endangered for the past 30 years. Due to conservation efforts in Florida, George, and South Carolina, Wood Stork populations have rebounded to the extent that they were “upgraded” to being only threatened. This is a great conservation success story and one that you can celebrate by heading out to your local wildlife refuge in search of an ironhead!