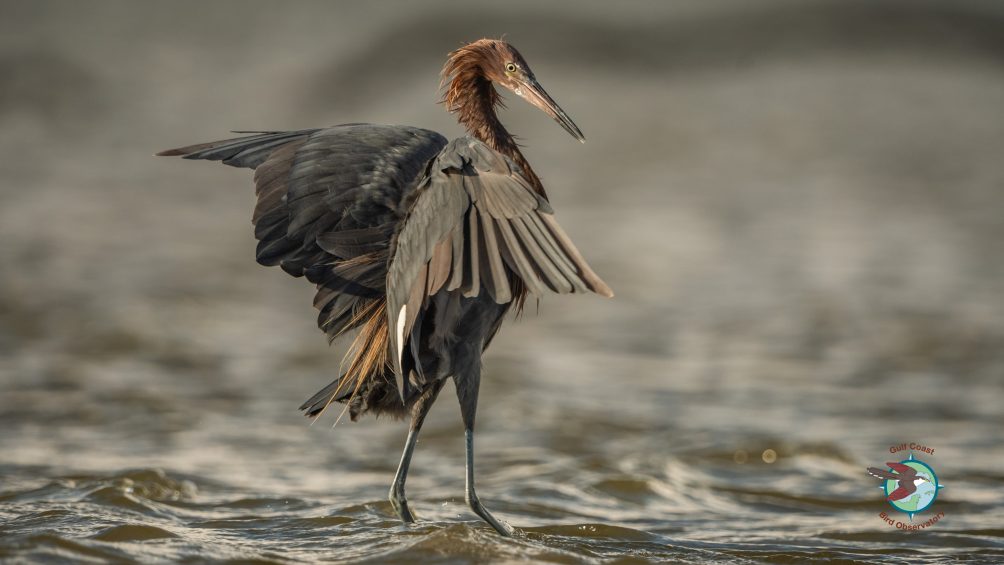 Reddish Egret (Egretta rufescens) is uncommon to locally common along the Texas coast year round. Most inland records are post-breeding dispersal of juveniles, but they predominantly stick to the coastal areas. There are records in all regions of Texas, but the Western and Panhandle areas have limited sightings with the exceptions of the West Texas reservoirs. Outside of Texas, Reddish Egrets range along the Gulf Coast from the Yucatan around to Florida and the Pacific Coast from southern California through Central America. Most of the nesting locations are limited to small uninhabited islands that are vulnerable to tropical storms, hurricanes, and ship traffic erosion. They typically lay two to seven pale blue-green eggs in a stick nest that is built in a low tree, mangrove, or on the ground. Incubation is about 25 days and is carried out by both parents. Their preferred habitat is shallow coastal lagoons and estuaries with a diet consisting of small fish, frogs, and crustaceans.

Reddish Egret is a member of the Ardeidae Family that consists of bitterns, herons, and egrets. Reddish Egret is a medium size egret that has a slender long neck and long legs. The bill is fairly heavy and pointed and is pink with a black tip. During the breeding season, the lores are violet. There are two morphs (Dark and White) for this species. The dark morph’s head and long neck is covered in shaggy feathers that are rufous in color. The body and legs are blue-gray in color. The white morph’s head, neck, and body are entirely white. The white morph make up approximately five percent of the population. They have a large wingspan at four feet and stand two and a half feet high. Juveniles are very similar to an adult with the dark morph being a pale color and lacking the rich rufous neck color. Their typical weight is one pound. They call infrequently except when disturbed. The call is a soft groan and a short grunt. While displaying, they will frequently clatter their bills.