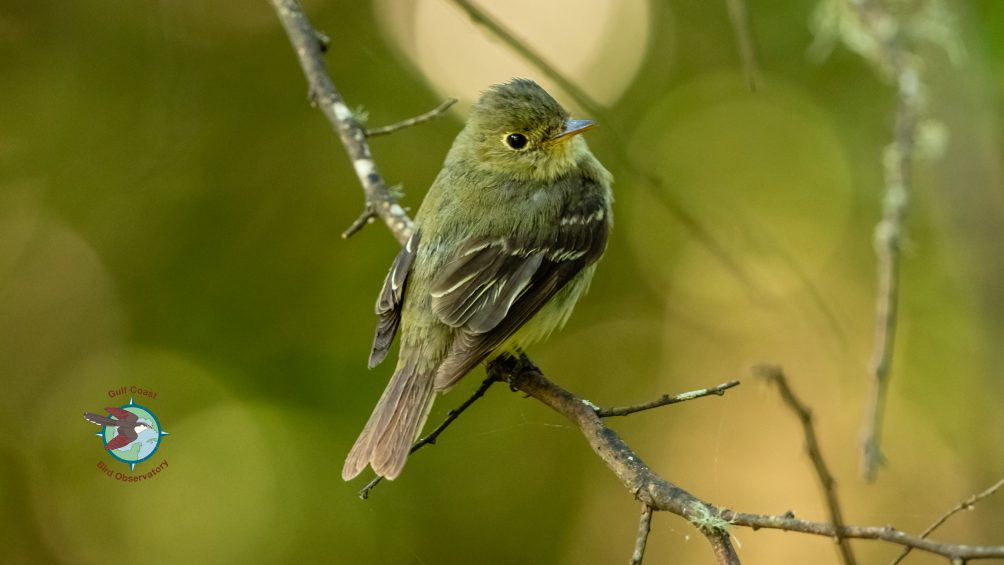 Geography/Habitat:
Yellow-bellied Flycatcher (Empidonax flaviventris) is an uncommon to common migrant throughout the eastern half of Texas. In the western half of Texas, the bird is either rare or casual. West of Abilene, there are only a few records. Spring migrants predominantly pass through in May with a few beginning during the last week of April. Fall migration is predominantly from Mid-August to Mid-October. There are only a couple of reports of lingering birds into December in Texas. On a larger scale, Yellow-bellied Flycatchers are found in the eastern half of the U.S. as well as a large portion of Canada, including the western provinces of Canada. They nest in the boreal forests and bogs where the yellow belly allows them to disappear on the breeding grounds. Look for the bird perched in the lower and middle levels of dense forests, from which it quickly flies out to grab insects in midair or from the vegetation. When perched it nervously turns its head and sometimes gently flicks its tail. Their diet consists of crane flies, flying ants, beetles, caterpillars, mosquitoes, midges, stoneflies, and spiders. They occasionally eat fruit, including poison ivy berries. Females select a shady spot on the ground for nesting that is covered in moss and vegetation. They typically place the nest under a tree root, in a hole in a log, under the roots of a fallen tree, or tucked in moss at the base of a fern.

Identification:
Yellow-bellied Flycatcher is a member of the Tyrannidae Family that consists of 37 species. Identification can be challenging in this family as many have drab plumage and short, rather broad-based flattened bills. Yellow-bellied flycatcher is small and compact with relatively long wings (two whitish wing bars), a short tail, and rounded head. It is a bright olive color overall with a yellow-olive belly. The eyeing is yellow, bold, and complete. They are about 5.5 inches long with an 8 inch wingspan. Their typical weight is just under half an ounce. Although they may be hard to spot on their breeding grounds, their abrupt and harsh song, sung with gusto, be-trays their whereabouts. The song is an abrupt “pse-kk” while the call is a rising “turree”.

Interesting Facts:
• Considered the easiest of the eastern Empidonax flycatchers to identify.
• First described in 1843 by Spencer Fullerton Baird, an American ornithologist and ichthyolo-gist.
• Winters in semi-open habitats of Central America, including coffee plantations. Shade-grown coffee plantations have higher densities of the bird than sun-grown coffee plantations.
• Yellow-bellied Flycatchers don’t stick around on the breeding grounds for long. They have one of the shortest stays of any Neotropical migrant, often less than 70 days.
• The oldest recorded Yellow-bellied Flycatcher was a female at least 5 years, 2 months old, when she was recaptured and released during banding operations in New York.