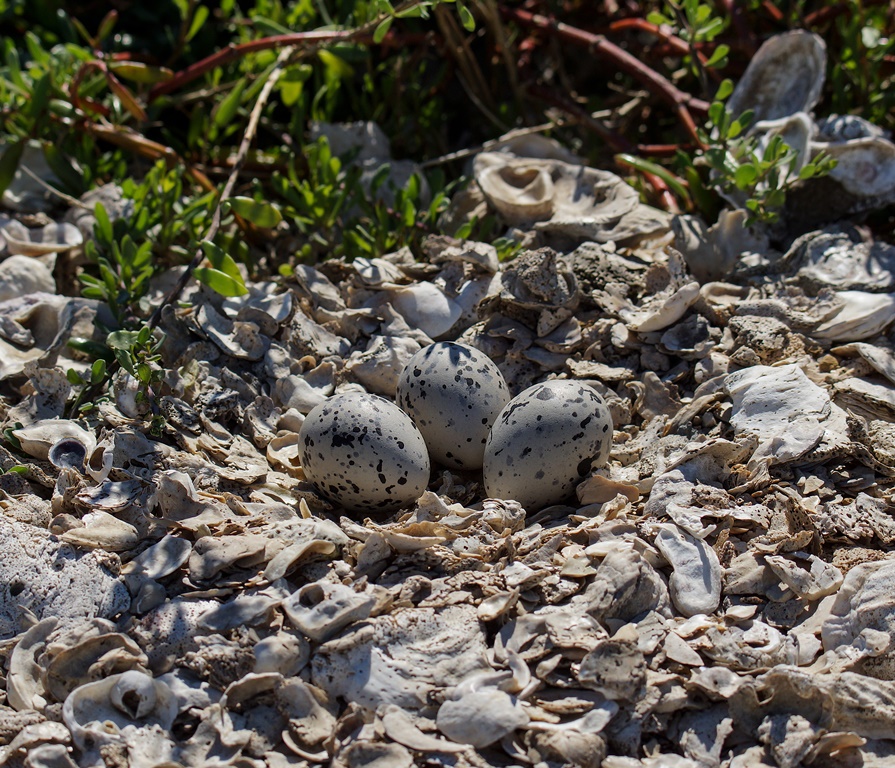 I was joined by Alan Wilde (Galveston Master Naturalists), Taylor Bennett (GCBO Coastal Biologist) and Morgan Barnes (GCBO intern) for our oystercatcher survey this week. The weather was bad on Wednesday so we had to move it to Thursday. It was cold but fortunately sunny and not very windy.

On Sunday, while Alan was kayaking he discovered that FR & unbanded had a two egg nest in 28 & AP’s territory. Where are 28 & AP? There was a Peregrine Falcon sitting on the island 20 or 30 feet from where Alan said the nest was and FR & unbanded were on a reef in the opposite direction. I had feared the 30 mph north winds the previous day might have overwashed the nest but it appears it was the Peregrine keeping them away because the eggs were still there. It looks like it is high because the tide was so low but perhaps not high enough. 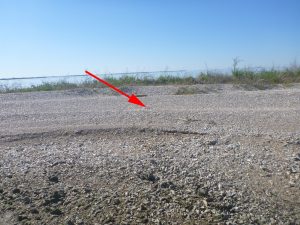 We flushed the Peregrine when we went to check and the oystercatchers began working their way back to the nest when we left. I’ve seen oystercatchers go berserk when a Peregrine flew over their nest so they must perceive the falcons as dangerous. Clearly FR & unbanded weren’t taking any chances. We checked on them later and one of them was incubating so hopefully all is well there.

With FR & unbanded moving to Marker 52, it leaves only one pair in Jones Bay. When I started this project in 2011 there were five pairs in Jones Bay. The islands have eroded so much that they can’t sustain nesting birds anymore. Very sad. CA & Y2, the only remaining pair, weren’t home when we checked.

We continued on our route and found most pairs weren’t in their territories on North Deer and Marker 52. At one point we dropped Alan off to check for scrapes and he snapped this photo. 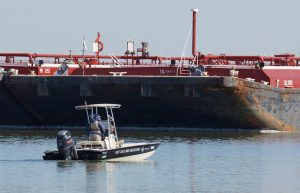 Holy cow! But it’s not what it looks like. Just an optical illusion. We weren’t that close to the barge, nor were we right in front of it. I’m not that crazy!

Despite the lack of action in that general area when we arrived at J6 & UF’s little island, we found they were incubating a three egg nest! 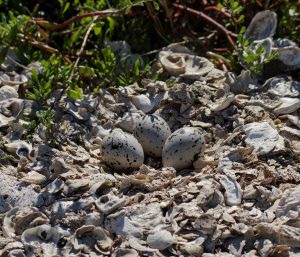 Woohoo! There is a long history here that you may have heard before. J6 was previously paired with P4 and they always laid a nest in February and nearly always fledged a chick. In 2016 we found that a young female, UF (banded as a chick in 2012), had run P4 off (she moved next door with JJ). We’ve watched J6 & UF struggle ever since. Either they didn’t lay a nest at all or they waited until too late in the season and were always overwashed. It appears UF has finally gotten the memo that she needs to lay her eggs early to succeed. I’m excited about this one. I hope I’m not disappointed!

On to South Deer where things are really strange this year. First, we found none of the pairs that were there in previous years. The only pair from this island that we’ve seen on the reefs is Y7 & unbanded. They were on a reef today. It appears HL & unbanded, JN & UW, XA & unbanded, LL & unbanded, and KK & unbanded have all disappeared. What the heck is happening! Maybe some of them will turn up but today we found 16 & unbanded who were in JN & UW’s territory last week in XA & unbanded’s territory. Apparently they have their pick and they are choosing carefully. A5A & unbanded, a pair from the Gangs Bayou island were on a reef nearly and it seems they may be making a selection as well. Time will tell.

We took a break from oystercatchering to check and see if the Brown Boobies that have been hanging out in West Galveston Bay since August were still there. We found all three enjoying the sunshine on one of shell marker signs they like to hang out on. 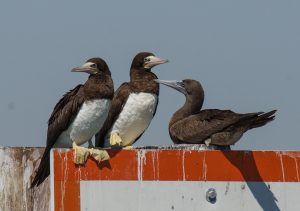 In August we found one here. Then around October that one was joined by another one. Finally a month or two ago a third showed up. I bet they were wishing they were in Mexico with as cold as it was out there. Why are these birds here? How long will they stay? Brown Boobies typically nest December through March so clearly these birds aren’t nesting this year. One of them is a youngster so it wouldn’t breed anyway. Interesting!

We headed to Gangs Bayou where we found A4A & unbanded, the only pair there with a decent territory, on the breakwater. They were being dive bombed by another pair that didn’t stick around for identification. There were two Peregrines there and one was perched nicely on a post. 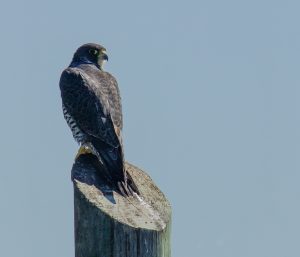 16 & unbanded have abandoned their territory on Galveston Island the next stop was Jigsaw. Nothing happening there either. YE & unbanded weren’t there and LH & T6 were out on the end of a reef. We’ve seen LH’s previous mate WW out on the reefs nearby but not on the island. Will she come back to the island with a new male or abandon it all together?

Next was Struve Luci the crown jewel of February nesters. It’s always fun to go there! I was sure that L9 & unbanded would have a nest this week but when we arrived we found them on the very end of their territory on a reef. Then we saw why. They were being dive bombed by another oystercatcher. As we watched they took off in hot pursuit and just kept flying and flying and flying in circles trying to run the intruder off. Eventually the female landed back on the island and left it to L9 to continue the battle. I could only assume it was a younger male trying to run L9 off. He’s getting pretty old and may not be able to keep up the fight. These birds have a hard life. Alan’s photos revealed that it was JX mounting the attack. 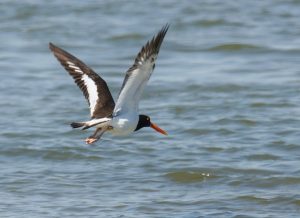 We checked and found that indeed L9 & unbanded did have one egg on the ground already. The territory dispute might put that in jeopardy. We’ll see next week. 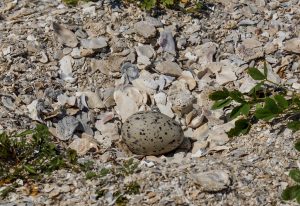 Both LT & JA and 12 & unbanded still had three eggs. Since we found 12 & unbanded’s nest on January 31, it should be hatching soon! KR & unbanded were acting very sketchy but we only found scrapes in their territory. Perhaps next week they will have a nest. HM & X7 are at the north end of the island and their territory is very eroded and so low now that it is not suitable for nesting. They’ve really got no good options so I’m not sure what they will try. We’ll keep watching. Last week we discovered pelicans on eggs already. This week we noticed the Forster’s Terns are starting to gear up. 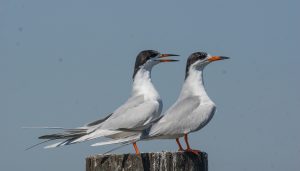 Time was getting away from us and I needed to be back at GCBO for another project but I really wanted to check the Swan Lake area because I was sure K7 & unbanded would have a nest. The railroad bridge was down but the tide was so low that we were able to go under it easily and head up there. At Zimmerman Point where 20 & unbanded nest, we found no oystercatchers but two Crested Caracaras were very cozy sleeping on the shell mound. I’m seeing caracaras out on the islands more and more these days and that is not a good thing. They’ve been documented preying on skimmer chicks farther south. I’m sure they would take an oystercatcher chick if they got the chance. 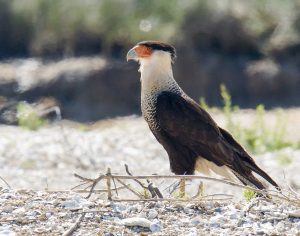 When we got to K7 & unbanded’s territory, there was a Great Blue Heron standing right where we found all their scrapes last week while K7 looked on. 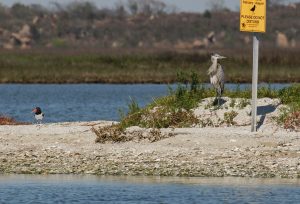 Did the heron take their eggs? We’ll never know but there weren’t any eggs there and last week they seemed like they were very ready to lay some. There is just no end to the predators the poor oystercatchers have to deal with. Our presence ran the heron off but K7 & unbanded were not appreciative at all and gave us the business just the same! Sorry guys! Try again.

Nothing was happening with any of the other pairs up there so we headed back to the boat ramp. I was very glad to be out of the cold. Even with long underwear and waders, my feet were like blocks of ice. I’m glad I don’t have to sit and incubate a nest on an exposed island in a 30 mph north wind. These birds are tough!