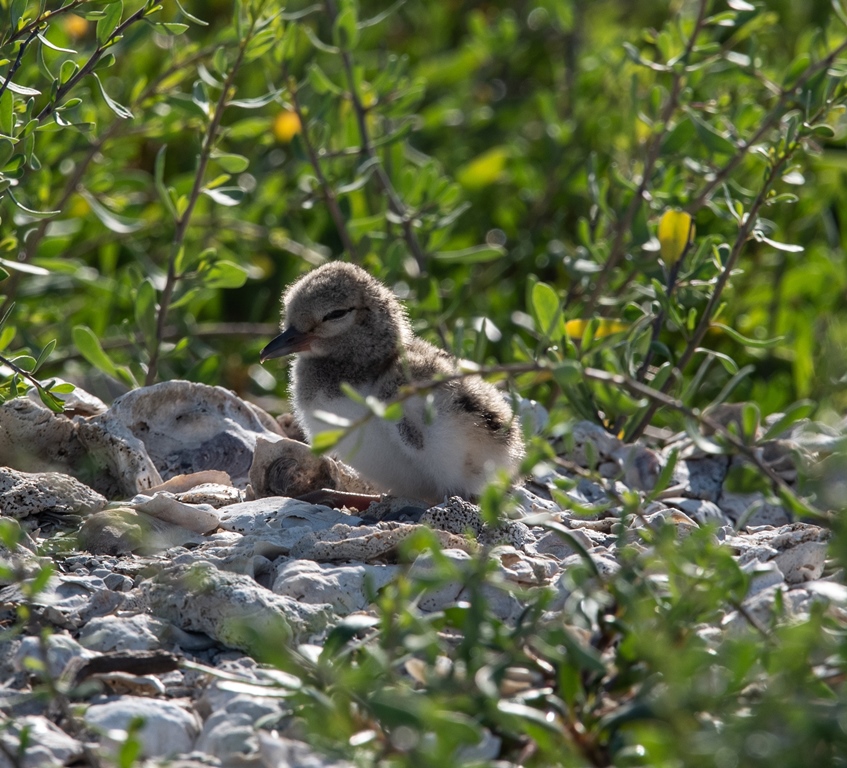 It wasn’t pretty but we made it out to monitor the oystercatchers this week. We were supposed to go on Wednesday but there was a high chance of rain so I postponed til Friday. After seeing what the weather actually was on Wednesday it was clear we could have gone that day but you just never know. On Friday there was a forecast for 18-20 mph wind for a couple of hours and then it was supposed to drop rapidly. I figured we could check things in the protected areas for the first couple of hours and then when the wind backed off do everything else. All I can say is never trust the hourly wind predictions! You’d think I would have learned my lesson by now but I’m ever hopeful they will get it right and sometimes they do.

Anyway, Alan, Taylor, Morgan and I headed out about 8:30 and went to check on the pairs whose nests might have hatched first. These pairs are very stealthy with their nests and chicks. We never see the incubating and we rarely see their chicks until they are large so I knew we didn’t have much of a chance of seeing them. We found a spot that was reasonably protected from the wind and far enough away that the adults hadn’t realized we were spying on them yet and tried to see if we could see them feeding chicks. It was just too bouncy on the boat though and we couldn’t see much. I tried to pull up to a reef for more stability but by then the adults had discovered we were there. So no satisfying glances of adults feeding chicks were to be had.

We went to the other end of the island to check on the pairs down there. If you read last week’s blog, you know that JX was all over L9 trying to take his territory while L9 & unbanded had already laid an egg. I was anxious to see what the outcome of the battle was. We found L9 & unbanded feeding along the island edge but their egg gone. Appears JX did not prevail but he probably caused the nest to fail. Sad. Since we found the next door nest (LT & JA) with three eggs, we didn’t know when it was going to hatch. I wanted to take a quick peek to see if there were still eggs but instead we found three chicks! Morgan snapped a few quick photos and we got out of there fast. LT & JA aren’t as hyper as 12 & unbanded but they weren’t very happy with us. We left them to their business. 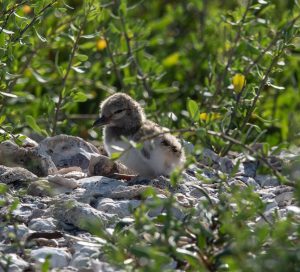 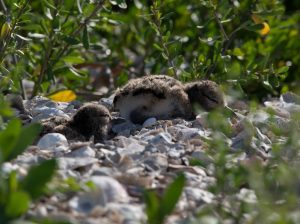 The wind hadn’t died at all but we kept going anyway. It had to die sometime right? Nothing was happening on Jigsaw and we didn’t find any birds on the docks so we headed down to Gangs Bayou. The tide was so low that we couldn’t see over the breakwater to see what was happening behind and the wind was threatening to blow us into the breakwater so I had to get pretty far away from it to keep the boat safe. The result was that we couldn’t see any oystercatchers at all. The tide was much too low to go behind the breakwater so we’ll just have to check it next week. I think there is only one pair left there.

South Deer was nearly barren of oystercatchers. We found an unbanded pair where KK used to be and one of the Gangs Bayou pairs (A5A & unbanded) on a reef where LL used to be. What has happened to all the pairs that have been there over the years? There are usually six pairs on this island. Now they are all missing (KK, LL, XA, JN, UW, and HL) plus the mates. I also noticed there weren’t any white pelicans where there usually are and not many Laughing Gulls. I’m beginning to wonder if there isn’t a large predator (can you say coyote) on this island.

It was too shallow to check the pairs on the backside of North Deer so we went back to the GIWW and headed for J6 & UF. Happily they were incubating away! Yea! I’m going to be very disappointed if that nest doesn’t make it. Even more sad will be if it hatches and then the chicks get washed away by a high tide. It’s a very low island but they finally listened to me and started early so maybe they have a chance.

On North Deer we found that YM & JH had laid one egg. I was so distracted by the wind and the low tide that I forgot to take photos. They were already incubating it so it’s not likely they are planning to lay the full complement of three eggs.

JJ & P4 were nowhere to be found and W5 & JC were standing on a mudflat so no nest for them. That brought us to Fred (FR) & unbanded. They appeared to be incubating a nest but when I went up to set up the box trap to catch the unbanded one, there were no eggs. What happened? It’s much higher than J6 & UF’s nest so if there’s didn’t get overwashed this one couldn’t have. Perhaps the Peregrine we found there last week kept them off the eggs to long and the discarded them. Hopefully they will try again.

The wind had finally died a bit so we went in search of some far flung pairs all the way down the GIWW to Chocolate Bay but we didn’t find most of them and the ones we did find were all unbanded. There has been a lot more shifting of birds this year than expected. What is going on?