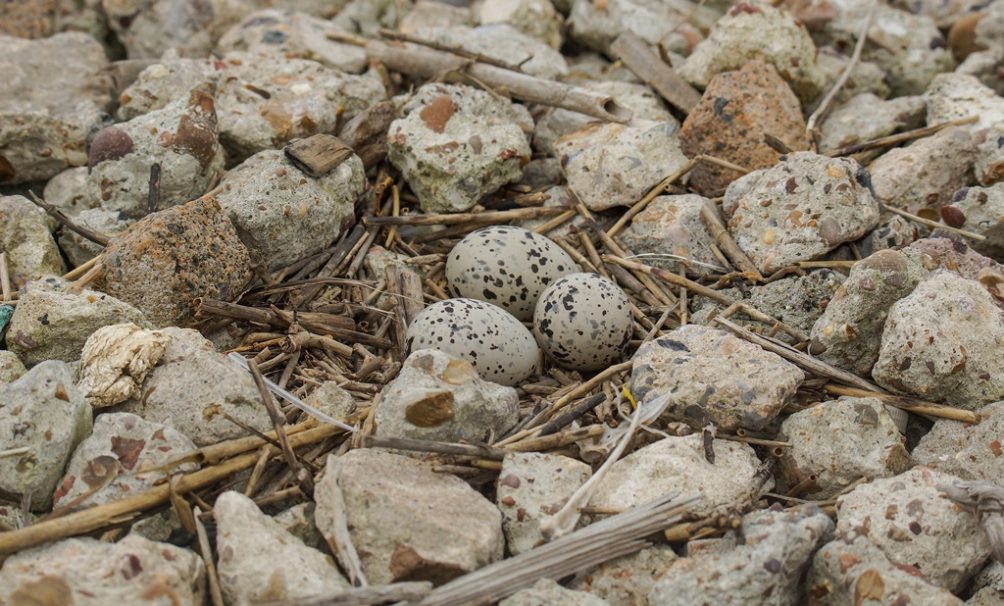 This week Alan and I were joined by Leslie Goodman and her son Travis Ly to survey West Galveston Bay. Travis is interested in a career in wildlife biology and I’m all about giving kids a taste of what it’s like! It was windy and that caused some issues with the boat but we made it work. We had barely gotten into Jones Bay when suddenly there was an oystercatcher escorting us, literally. It flew in from somewhere, circled the boat and then flew ahead of as we made our way across that small bay. It had to be Fred (FR). He is determined to protect his chicks! We hadn’t gotten anywhere near his territory though. I he knows the boat, the sound of the motor or something. Maybe it’s me. There have been times when I swear the birds know me. Anyway, since Fred was already upset we didn’t bother him but just spied on his wife from afar. She was atop their shell mound briefly but retreated to the reef when she realized we were looking at her. We didn’t see the chicks but I’m sure they are there or Fred wouldn’t be so upset. Go Fred!

W5 & JC have the territory next to FR & unbanded but we found JC alone on a low part of the island. That was a clue that W5 was probably on a nest! We didn’t see him so I figured the nest was on the side of the island that we couldn’t see from where we were. CA & Y2 were on their island too but we didn’t find a nest. There were some scrapes but they could have been from the Caspian Terns that are beginning to return.

We exited Jones Bay (much to Fred’s relief I’m sure) and went to find W5. Sure enough we saw him sitting up high on a shell bank doing just what I suspected he was doing. Incubating three precious eggs! 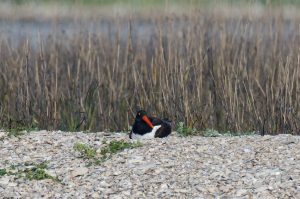 I am still not sure if I can forgive W5 for ousting H0 (my longtime favorite) from his territory but if he manages to pull off some chicks with JC that would help. We didn’t see JJ & P4 anywhere so we moved on. Either YM or JH was incubating their nest on North Deer. 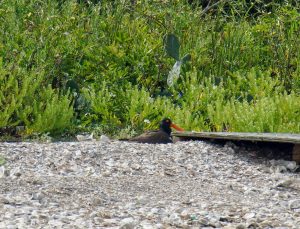 There was a slight chance that J6 & UF’s nest would be hatched but when we arrived they were still incubating three eggs. It should be hatched next week. 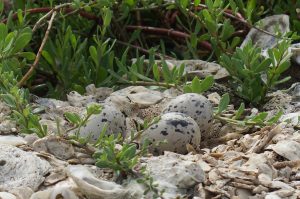 We moved on to the back side of North Deer and saw that C1A & unbanded were still incubating their nest. Last week they had two eggs but this week they only had one. Danged pelicans and gulls! One of them must have taken an egg or stepped on one. We got a brief glimpse of one member of the pair next door (E6A & unbanded) but the wind was too bad to go in there and check for a nest so we’ll have to do that next time. 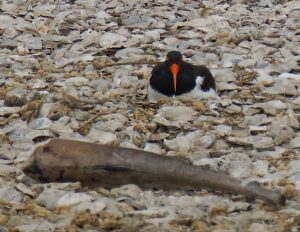 We moved on to South Deer where we found the pair we banded last week, E2A and F1A, hanging out in HL’s old territory. We caught them in KK’s old territory which is right next door and I thought they would have a nest there since they had a very nice scrape but apparently not. Make up your mind and get to it. Time’s a wasting!

Around the other side of the island we found 16 & unbanded standing on the shoreline just like they were last week. Suddenly another pair flew to a nearby reef and 16 & unbanded had to come out and claim their property but I noticed that one of them flew back to the shoreline pretty quickly and then walked up the shell bank and put its bill to the ground like it was checking on something. Oh boy. That bears checking. Sure enough I found a three egg nest! There’s no telling how long it has been there given that they haven’t let us see them incubating. 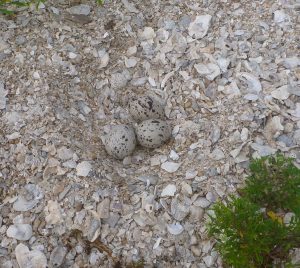 The final pair on that island is A5A & unbanded and they were incubating away. I confirmed they had increased their egg count to three and we moved on. 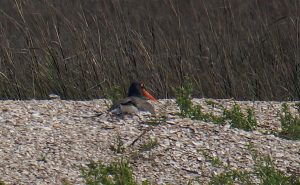 There was once again nothing happening at Gangs Bayou. Travis had expressed an interest in the Brown Boobies and I hadn’t been sure we could get out there since they hang out in the middle of the bay where the wind has a chance to whip up some nice waves. But with the wind at our back we motored over there and found all three hanging out one of the shell marker signs. I didn’t want to head back into the wind so I just kept going and headed to the unbanded pair we had discovered last week near Greens Lake.

They were on the nesting island this week so we set up the noose carpets with the decoys. 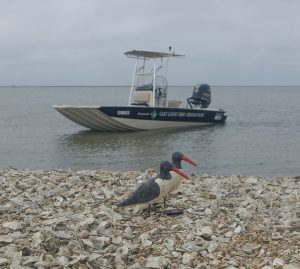 Once we spooked them and they flew over and heard the tape playing, they got very interested in the decoys and started doing their cocked tail display and calling. It didn’t take long before the female wandered into the carpets and got caught. She was a beauty! We banded her F9A. 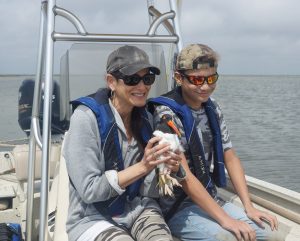 Then we had to head back to the other side of the bay to pick up where we left off over there but we went via the GIWW which protected us from the wind. This also involved us going past Fred’s territory and as we motored along the GIWW, he flew out and escorted us again! I certainly hope he’s only doing that when it’s us because if he’s doing it for every boat that goes by, he’s going to be mighty tired.

On Jigsaw we found both pairs but no nests, but I discovered two broken eggs shells near a scrape in LH & T6’s territory. The gulls must have gotten them. Dang. 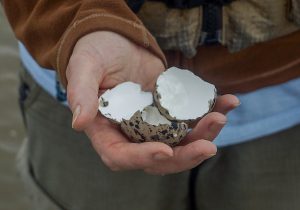 On Struve Luci all the pairs were present. L9 & unbanded were incubating their eggs. LT & JA were nonchalantly feeding along the shoreline. I’m not fooled you two! I know you have some chicks hidden up there somewhere! In contrast, 12 & unbanded started flying around expressing their displeasure at our intrusion. They have chicks too but a completely different reaction to our presence. It’s interesting how the different pairs have such different personalities. We motored up to the rock wall to check HM & X7’s nest. Still three eggs. Alan got a photo of the nest which shows that it is made of sticks! Well, sticks laid down in a depression on the rocks that make up the wall. I’ve seen a lot of oystercatcher nests but none like this one. 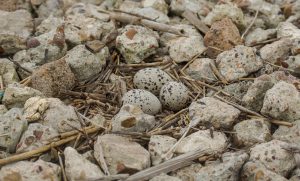 We stayed on the boat so as to not endanger the nest but I’m wondering how the chicks will survive if it hatches. There are so many predators on Galveston Island, I just don’t see how the chicks wouldn’t be found by one. I’m thinking through the options for protecting them but there aren’t many.

From there we headed up towards Swan Lake. 20 & unbanded were standing off to the side of their territory nervously watching an Osprey that was perched in the middle of the shell mound. I thought maybe the Osprey was keeping them off a nest so I went to look but only found scrapes. Then when we got to LR & unbanded, we found them nervously watching a Crested Caracara that was eating something on their shell berm. Hello raptors! The oystercatchers are trying to nest. Go eat your dinner somewhere else! I ran the caracara off and there was no sign of what it had been eating so I guess it took its meal with when it flew off.

K7 & unbanded were still acting sketchy but we didn’t find a nest in their territory. They could easily have one somewhere else we aren’t looking though. They are very untrustworthy when it comes to giving up their secrets!

We got a big surprise in the next territory though when discovered 39 & unbanded have a nest with two eggs! I have been watching 39 since I banded her in 2013 and she hasn’t laid any eggs since 2014. I’m glad she’s finally on board with the program again. 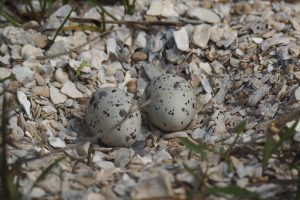 X3 & unbanded were on the breakwater so I guess they aren’t ready to start yet. That was the last pair so we headed back to the boat ramp.

I am planning to continue monitoring the oystercatchers through the season despite the covid-19 outbreak so unless they quarantine us all to our houses, Alan and I will continue to check on the birds. We are curbing the use of volunteers for the next few weeks though. Stay safe everyone, wash your hands and keep your 6 foot distance. We’re all in this together and together we can beat it!

We are once again adopting out oystercatcher pairs to support this project. If you adopt a pair, you will receive an adoption certificate for your birds and I will update you monthly on their progress throughout the breeding season. All adoption funds will be used to fund our work for the oystercatchers. If you’d just like to make a donation (thank you!) you can do so on our website here. Given that we had to cancel all our fundraising events this spring, we’re going to be a little short on cash in the coming months.