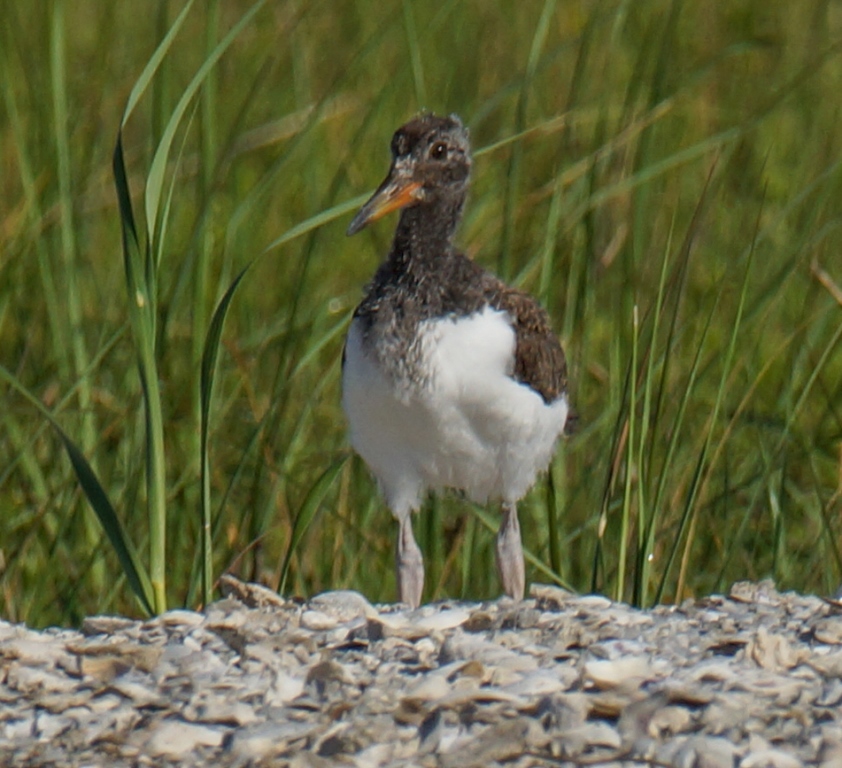 Well, I forgot to do the blog over the weekend! I guess I got so used to not doing during the quarantine that I have to get back in the habit. Sorry about that! Because of the Memorial Day holiday last week I only made it out to the West Galveston Bay field site but there was plenty of excitement there. When we left the boat ramp I intended to head up to Swan Lake but the dang railroad bridge was down so we headed over to Jigsaw Island first. And what the heck did we see there! There were six oystercatchers in a group in LH & T6’s territory. The included JX, X2, U5U, LH, an unbanded bird and another bird that flew off before we could id it. That one was probably T6 but we’ll never know. JX is a 2015 chick that we’ve seen all over the bay this season. He/she is being very persistent about trying to find a territory but nothing seems to be working out. I’ll be very interested to see where that bird ends up next year because I bet it will be on territory somewhere.  X2 is a 2011 chick that we see every now and then but doesn’t have a territory as far as we know. U5U is LT & JA’s chick from last year from nearby Struve Luci Island. I have no idea what they were doing in LH & T6’s territory or why LH & T6 were tolerating it when they have a chick. Perhaps they were just laying low waiting until the intruders moved on. 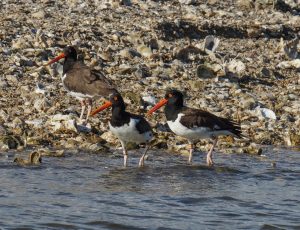 YE & unbanded were still incubating their two eggs and the railroad bridge was up by then so we headed up to Swan Lake.

We didn’t see any oystercatchers until we got to the Malone site where LR & unbanded are with their three chicks. I saw two chicks huddled up together near the water’s edge but we didn’t see the third chick so I moved in a little closer and it popped up from behind a shell ridge. Yea! Still three. Next week will be time to band them and it’s always a challenge when there are three of them to catch so stay tuned. 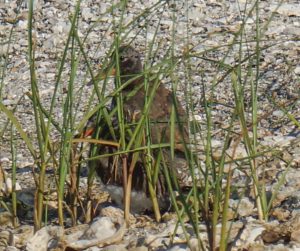 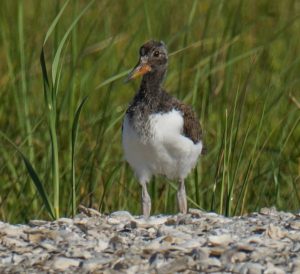 In Swan Lake proper we checked on the area where we’d discovered 11 & unbanded hanging out last week. They were there and they had an egg! It’s not a good spot from a mammal predation perspective (well if you’re the mammal it’s a great spot, but not if you’re the bird) but poor 11 & unbanded have no other place to nest so I guess they decided they might as well give it a go. I don’t have much hope for it but you just never know. K7 & unbanded and their chick U7X were in their usual spot and we found X3 & uubanded and 39 & unbanded on the breakwater so it was time to head back to West Galveston Bay. Thankfully the bridge was still up so we went under straight away.

On Struve Luci 12 was there with one of the three chicks. The other two must have been off with mom exploring somewhere. I sure wish I could participate in one of these exploratory missions with the chicks. I bet I would learn a lot about where oystercatchers like to go when they roam around! The unbanded bird with the new mate that replaced KR was in their usual spot but we only saw one chick there. 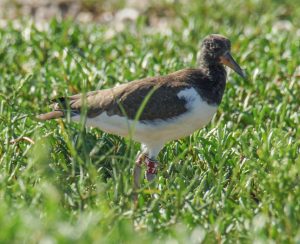 I am still wondering if that new bird will feed the chicks that aren’t hers. We’ll just have to watch and see if they manage to fledge. All the other oystercatchers were on the docks along the shoreline. LT & JA and all three of their chicks were together enjoying the sunshine. 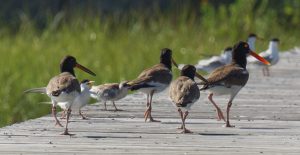 HM just couldn’t relax in our presence and kept flying around us. Relax HM! You’re chicks can fly now, they are safe! X7 (his mate) and the chicks were chillin on a dock probably wondering what all the fuss dad was making was about.

We went back to Jigsaw to see if things had calmed down in LH & T6’s territory and this time we didn’t see any oystercatchers there! What the heck? Then LH popped up from a shell ridge so I went in a little closer and suddenly T6 exploded out of the vegetation. Yes! They have a chick still. Great news! We checked the Galveston Island shoreline and found poor 16 alone sleeping along the water’s edge. I’m afraid his mate may have left him. This poor bird has had a rough go of it. His territory on Galveston is rife with mammalian predators. His nest is where I got the now infamous game camera photo of a cat taking an egg. Then when he moved to South Deer his chicks were taken by something (I suspect a caracara) and he was ousted from that territory by another pair. He just can’t get a break. I really feel for this guy. He tries so hard.

Speaking of South Deer – we went there next. F1A & E2A were still incubating one egg. Lackluster effort you two! You need some insurance eggs with all the Laughing Gulls there. One egg isn’t going to cut it I’m afraid. The other nest on that island had failed (A5A & unbanded) which isn’t surprising given the number of gulls that nest there. We found a single oystercatcher acting a bit suspicious on the far back side of the island but it was right by a large Royal Tern colony so I didn’t go investigate. It will become obvious if there is a nest there.

On the Gangs Bayou breakwater we found a female Red-breasted Merganser. We always seem to find some females hanging around into the summer and I have no idea why. This wasn’t the only one we saw, there were two or three scattered across the bay. I suspect they must be hampered in some way from going north but this one could fly so I don’t know what the deal is. 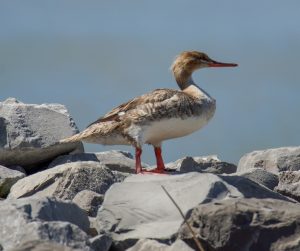 On the island we found that A4A & unbanded have decided to give it another go and had a new nest with two eggs. This area is prone to caracaras too and earlier in the season there had been a small Caspian Tern colony here in which all the eggs were predated. The evidence pointed to caracaras but of course we didn’t actually see them doing it. 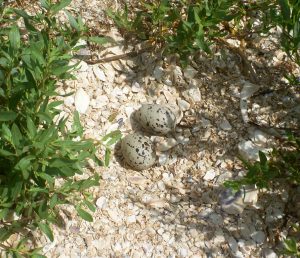 We headed across the bay and found that all seven of the Brown Boobies were still hanging out on the shell marker sign. As long as you’re going to hang out here for nearly a year why not make a nest? Give us some excitement! 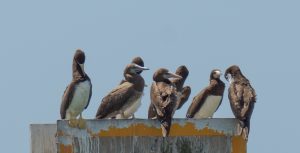 On the next shell marker sign we found two Magnificent Frigatebirds. What a cool bird they are. So prehistoric! 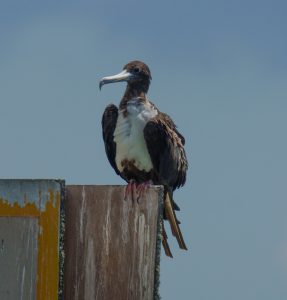 I almost didn’t go to Greens Cut because we haven’t seen that pair (F9A & unbanded) there in a while but I went anyway and it was a good thing because they were back and they had an egg! Wonders never cease. On North Deer one of YM & JH was shading their eggs so we moved on to C1A & unbanded. They are always hanging out on the same shell bank but we never find anything there. Well except Brown Pelicans. From that vantage point all you can see across a large swatch of salt grass is pelican heads sticking up. They are everywhere. Hard to believe they were once endangered. Now they are endangering everything else because there are so many of them. The other pair there E6A & unbanded were acting a bit goofy. Their eggs were gone so maybe they have a chick. If so I hope it is well hidden from all the pelican feet.

On Marker 52, we did not find JJ & P4 anywhere which is just weird. As soon as their nest hatched they disappeared. I am hoping it because they took their chick off somewhere to keep it safe from the pelicans and they will resurface when the chick is bigger. W5 & JC were still incubating their nest so we went to see if FR & unbanded had returned from their forays with their chicks. Sadly no they hadn’t. I’m beginning to miss you Fred. Come back please!

In Jones Bay it was time for CA & Y2’s nest to be hatched so I was excited to see if they had a chick. Their nest is positioned such that you can’t see if from any angle and have to go ashore to check it out. The adults were there and not at all happy about us being there so I figured it had hatched. Sure enough the eggs were gone and I found one chick hiding in the vegetation. Yea! There are a lot of gulls there so keeping that chick safe will be a big job. Hopefully they are up to it. That was the last pair to check and it was good to end on a high note! 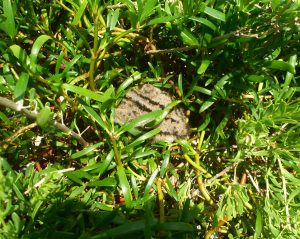