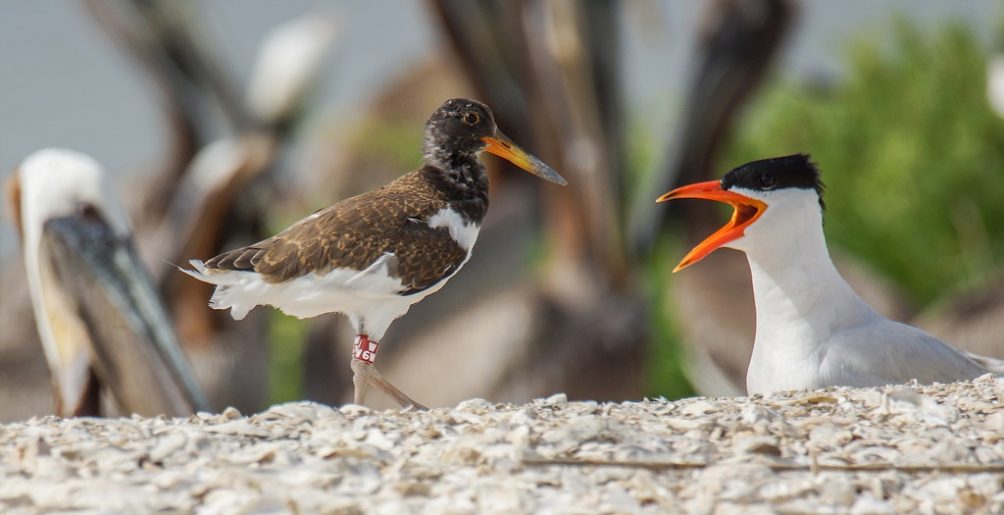 Well it is a covid world unfortunately. We were unable to go out last week because of a covid scare. All turned out negative however thank goodness so we were back in business this week. I went out to West Galveston Bay on Wednesday with Alan Wilde to check on the remaining chicks and see what the skimmers were up to.

We started in Jones Bay and immediately got a surprise when we found X4, E2A, and U8W on the island where X4 has been hanging out but never laid a nest. E2A is a South Deer bird and U8W is one of HM & X7’s chicks from Struve Luci this year. The birds are beginning to wander around! I was envious of that chick. How much fun would it be to have just learned to fly and be able to go where ever you wanted to?! 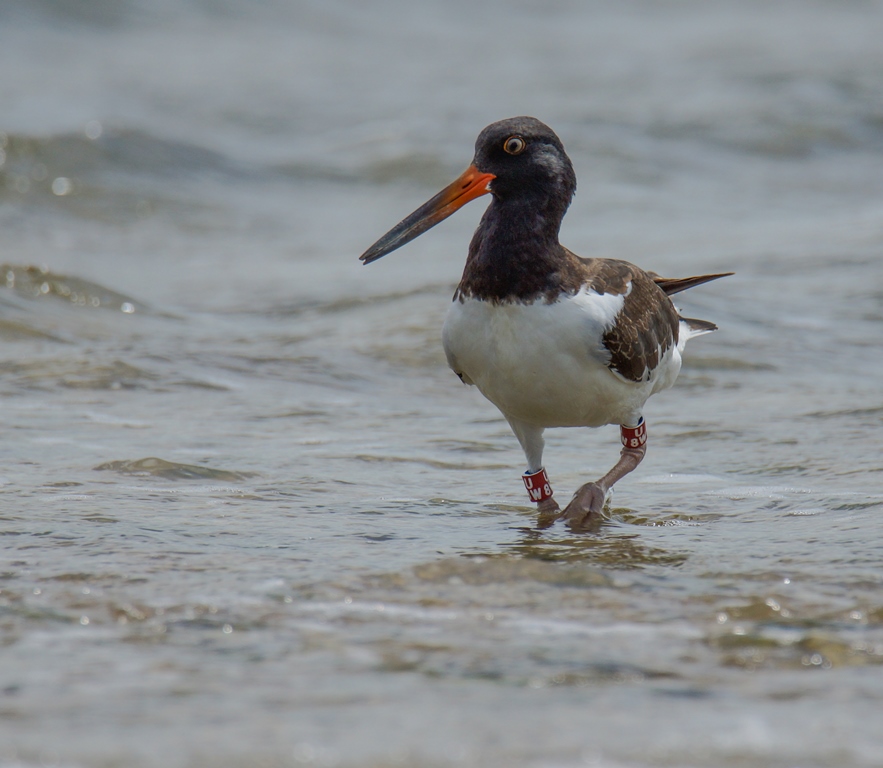 We checked along the backside of Marker 52 so the wind wouldn’t be blowing us into the island and found FR & unbanded with their chicks back on their home turf again. I’ve said it before and I’ll say it again – I’ll never tire of seeing them! FR struggled so long to raise some chicks and now he has finally done it. Great job FR! And your wife too, even if she is smarter than me and won’t let me catch her to band her. 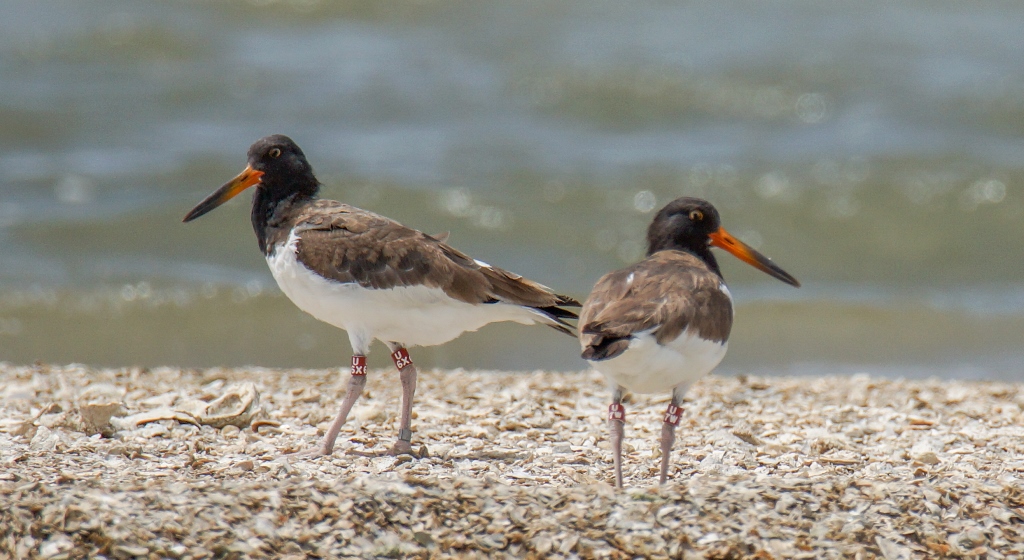 We headed over to CA & Y2’s island and found them there with their chick W6W. The chick is 42 days old now and should be able to fly but when the adults took off, it ran to the other end of the island and started swimming. Dang. I guess it isn’t fledged yet. I positioned the boat between it and the open bay so it would swim back and we made sure it didn’t get into any mischief. Here’s a photo from Alan’s kayak check on it last week. 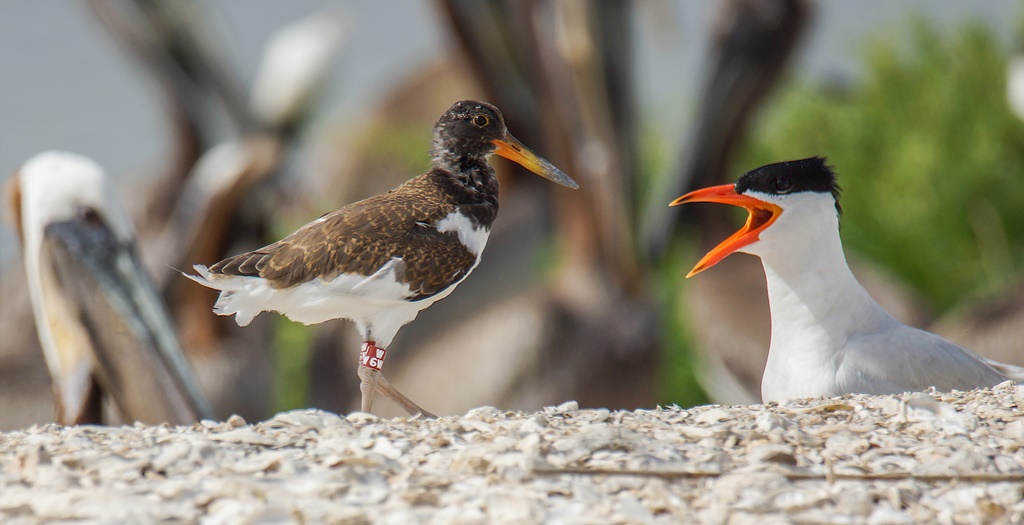 Then we went along the other side of Marker 52 and found W5 & JC hanging out along their shell bank. Maybe we need to get them some bird sized lounge chairs. They seem like they need them for the off season! JJ & P4 were not to be found. We checked J6 & UF’s island and they weren’t there either. I was beginning to think I would never see those miracle chicks that somehow survived the high tide.

Next was the main reason for heading out there today and that was to band YM & JH’s chick. When we arrived, one of the adults was on the beach but not the other one and there was no chick with the one that was present. Hum. When it saw us watching it, it flew out over the GIWW, circled around and landed on the rock retaining wall that borders the nesting territory. We motored over there and found that both adults were there. Interesting. Where was the chick? I tried asking them but of course they ignored me. It could have been behind the retaining wall in the vegetation but I wasn’t too keen on trying to get back there because the vegetation is thick and I have seen rattlesnakes on that island. We decided to come back later.

We found C1A & unbanded needing lounge chairs just like W5 & JC but there was an extra pair of birds there that flew off when we approached. Alan just managed to get a couple shots of them and we discovered it was W1W with an unbanded bird. W1W is a 2018 chick from JR & JH, the last one they had as JR was replaced by YM the following year. So W1W wasn’t far from home. Alan’s photos revealed the unbanded bird had fishing line wrapped around its right foot that looked identical to a bird that was reported on the Texas City Dike on July 3rd. So it seems that bird is getting around ok even with the fishing line on the foot. I wish it would stay put somewhere so we could catch it and remove the line though. That has got to be painful and will eventually result in loss of the foot or death of the bird. 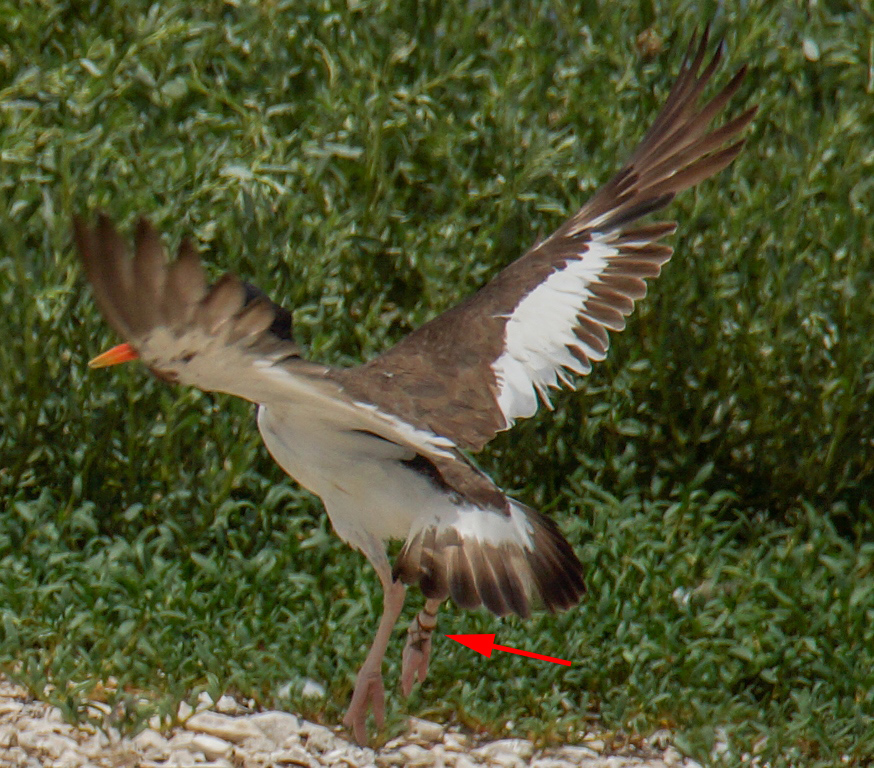 We continued on to South Deer where we found F1A alone in this territory. Not surprising since we’d seen his mate E2A over in Jones Bay. She must be scouting around for a new man. These female oystercatchers are pretty brutal about leaving their man behind if he can’t provide a good territory for them!

We didn’t see any other oystercatchers on South Deer until we got around to the other side. There we found the single unbanded bird that’s been hanging out there for a while. I wonder if it is a male setting up a new territory for next year. Time will tell!

We headed back up the bay checking the docks along Sportsman Road and again found 16 on a dock by himself. Dude! Find some friends! You are an oystercatcher and oystercatchers are not meant to be alone. He’s looking a little ratty but hopefully that is just because he’s molting rather than something else. A nice molt will make him all pretty so he can wow the ladies next year. 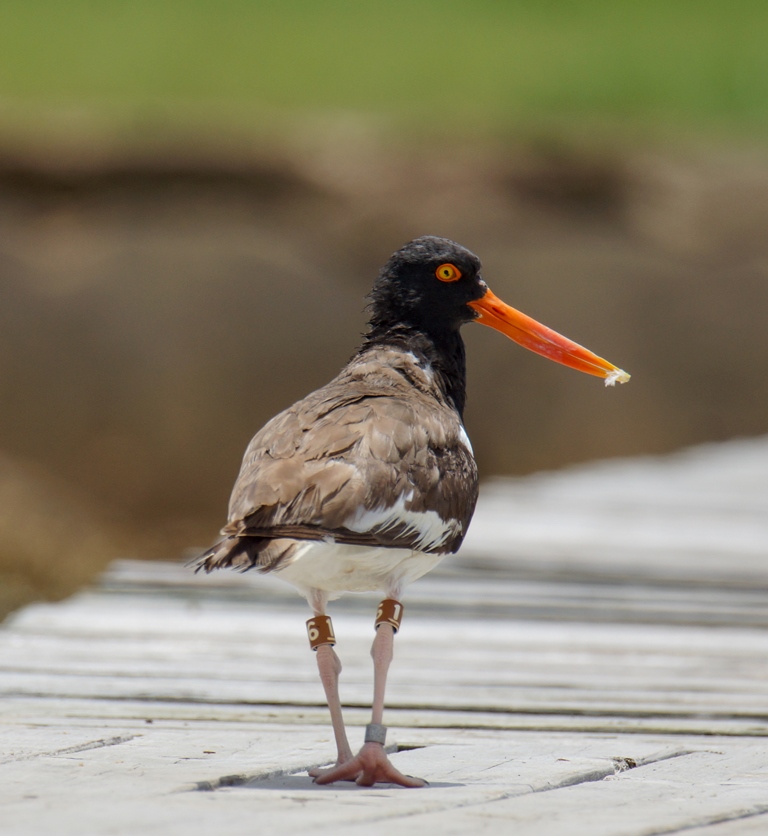 Then we found A5A & unbanded on the end of 8 Mile Road. This area has been gated off so there is no disturbance now. I wonder if they will try to nest there next year. They were originally on Gangs Bayou and the moved to South Deer this year. Neither effort went well. There was a young of the year bird there too but it flew when I got too close and Alan wasn’t able to get a photo so we’ll never know who that was. Drat.

YK was hanging out in 16’s old territory along Galveston Island. That probably explains why 16 isn’t hanging out there anymore. YK is a younger male (banded in 2014 as a chick) so it appears he ran 16 out and will try to nest there next year. I hope he has better luck there than 16 did! 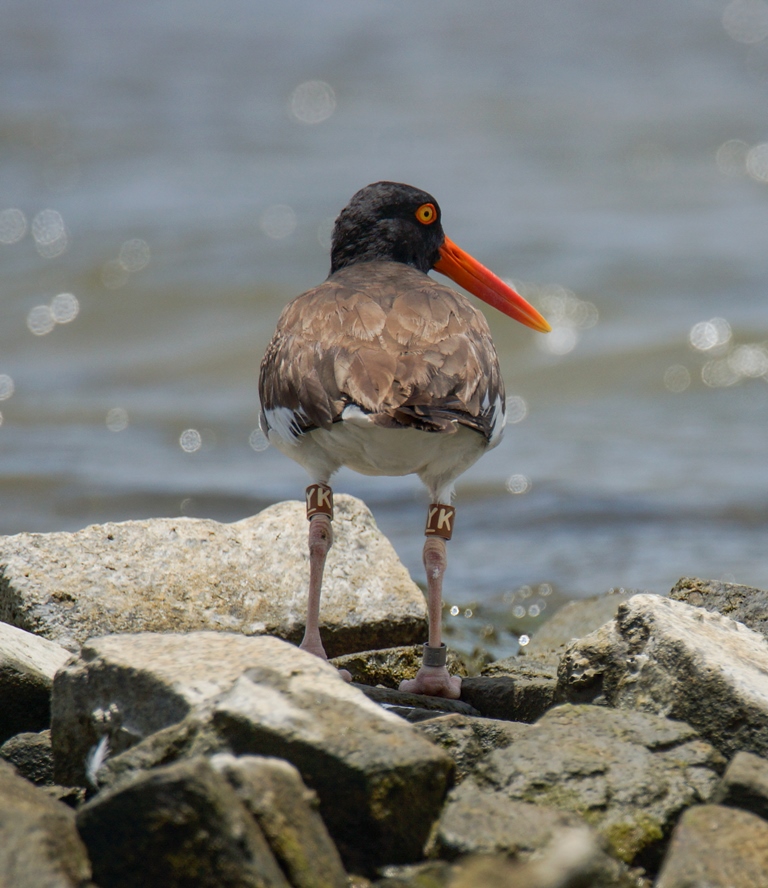 On Jigsaw we found both pairs (LH & T6 and YE & unbanded) hanging out on their respective reefs. Not very exciting. It was much the same on Struve Luci. L9 & unbanded were in with the skimmers. LT was with one his chicks (U8X) but there was no sign of LT’s mate JA and their other two chicks. I guess they were off on a foray somewhere. 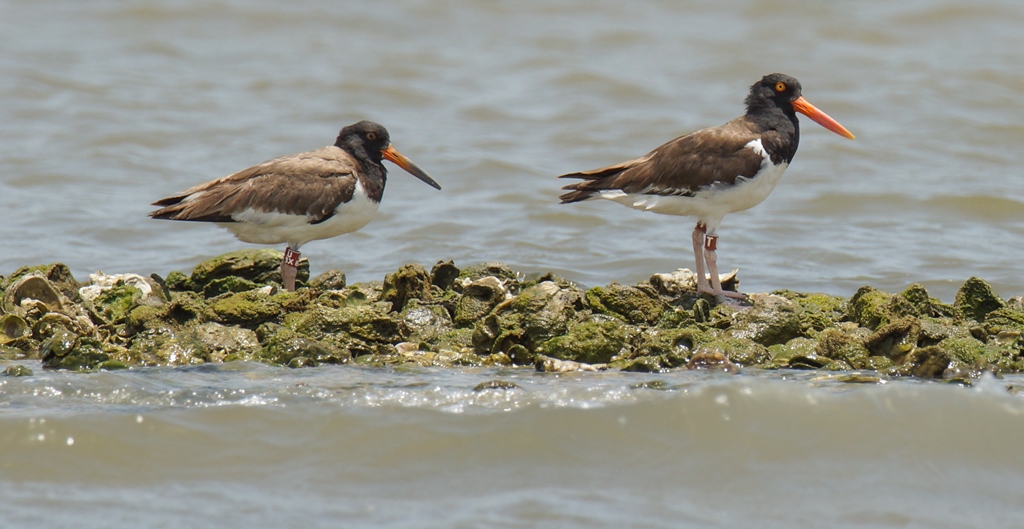 The unbanded pair was hanging out in their territory and both 12 & unbanded and HM & X7 were in their territories. So there was only one of the nine chicks from that island still hanging around. We counted 20 skimmer chicks but they were all big, fledged or nearly fledged. There should have been a lot of smaller chicks too but we saw none. I’m not sure what that means. One of the residents along that stretch of bay has been keeping an eye on the island and he said he’s seen flounder fisherman going on the island at night to fish. This is likely disturbing the skimmer nesting cycle a good bit and may have resulted in a lot of nest failure. Don’t worry though! We’ve got the game warden on it.

It was too windy to go up to Swan Lake and there isn’t really any reason to go up there anymore anyway except to gaze at the set of triplets up there. That is always a treat but we passed this time. So it was time to head back over to North Deer and see what was up with YM & JH and their chick. When we got back over there we found the adults sitting in the exact same spot on the retaining wall where we left them. Dang. I was hoping they’d be back on the beach with their chick. Well, ok, if you’re going to force my hand I’ll try to see what’s up! I couldn’t get through the vegetation so I walked along the retaining wall (don’t try this at home!). The adults flew off when I got close, landed on a small island nearby, and never uttered a peep so they are either being very sneaky or they don’t have a chick anymore. I found nothing for my trouble and so went back to the boat. Well, nothing to be done about that except check again next week. It was quite odd that they were sitting on that wall for so long. That is not where they usually are. Last year the only time we saw them on that wall was when they were with their chick but the chick was always on the wall where we could see it.

Alan suggested we go check for J6 & UF and the miracle chicks again since we were right there. I wasn’t too enthused since we’ve checked there every time we’ve been out and I’ve never seen the darn things but since we were right there, I headed over. Lo and behold there they were! The whole danged family was eyeing us suspiciously as we motored by. At Alan’s suggested I had brought the net gun just in case the chicks would let us get close enough to nab one so we could band it. The wind wasn’t in our favor though and the chicks were on the windward side where it was too shallow to get very close in the boat. They were having none of our shenanigans and flew off when we managed to get anywhere near them. Oh well. It was worth a try! And I’m sure glad Alan suggested we head over there because I finally got to at least see them!

It was hot and it was time to be done so we headed to the boat ramp. And I have to tell you I am really over this Saharan dust nonsense! Enough already. Keep your dust to yourself Africa. Wear a mask or something!