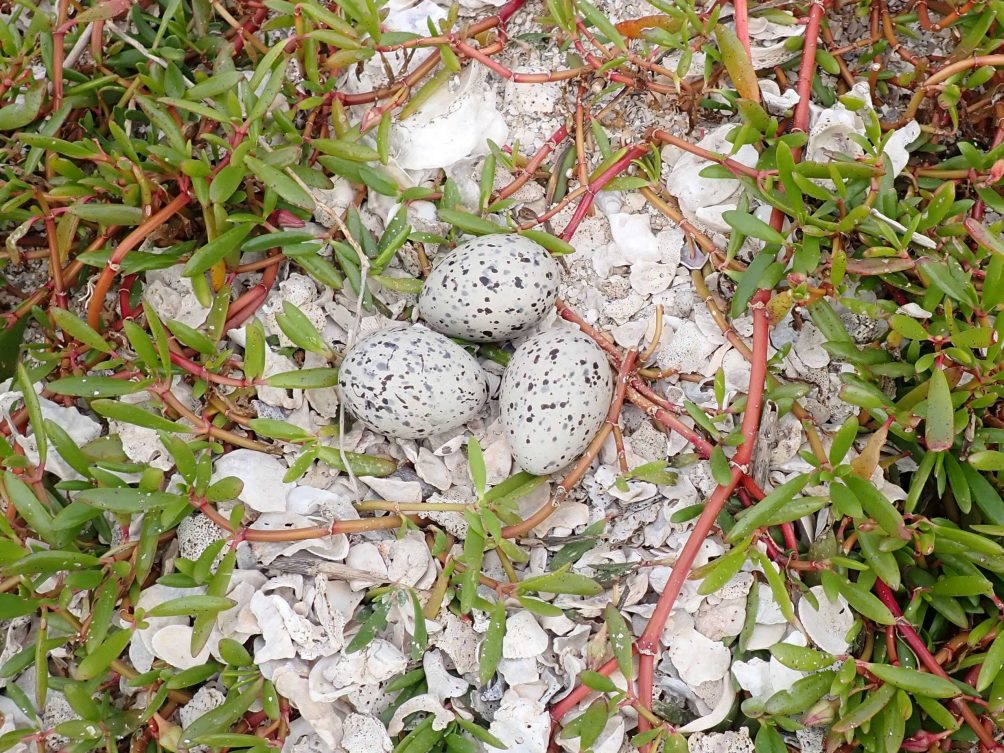 Well folks, it’s time again. I was alerted by Kevin Somers, a Galveston Island resident, that a pair of birds on Struve Luci island in West Galveston Bay might be incubating a nest on January 26. Kevin lives along the shoreline and has been keeping an eye on the birds. He was a great help last year when we were having disturbance issues on this island. We already had a planned survey scheduled on Friday, January 29th to look for the early nests and this was an area I had planned to check. We have found a nest for that pair in January the last two years and the year prior when we went out for our first survey in late February, they already had chicks! Thus the moving of the first survey to late January.

I was joined by Taylor Bennett (GCBO Coastal Biologist), Sarah Belles (GCBO intern) and Alan Wilde (Galveston Bay Area Master Naturalist) on the 29th. The tide was super low and it was cold but we bundled up and headed out. The wind was supposed to pick up in a few hours so we had to go up to Swan Lake first instead of rushing over to see the nest first thing. We found all the pairs in place along the Galveston Bay shoreline on the way up except LR & unbanded. I thought they might have a nest already but there was no sign of them. The wind was pushing us into the shoreline there though and with the low tide I was afraid of getting stuck so we didn’t go in very close. They could have been hiding behind a shell berm. In Swan Lake, K7 & unbanded were acting a bit suspicious but Sarah and I only found scrapes when we looked around.

So we headed back down to West Galveston Bay and went to Struve. This island is long and skinny and there are five pairs there so I pulled up in the middle of the island where there is an unbanded pair that is thus far too smart to get trapped and banded. We found the nest with three eggs every close to where I thought this unbanded pair would nest but I was pretty sure it wasn’t theirs. 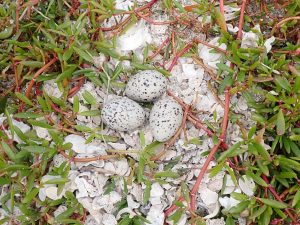 12 & unbanded have been moving ever closer to this pair’s territory as their territory erodes. But still we weren’t totally sure who’s nest it was. I set up the box trap over the nest and we went to the other end of the island to check on LT & JA and L9 & unbanded.

LT & JA were standing along the water’s edge when we arrived but I knew better than to trust that! They are sneaky. I looked around and sure enough they had a two egg nest. Ha! You didn’t fool me with your nonchalant attitude. 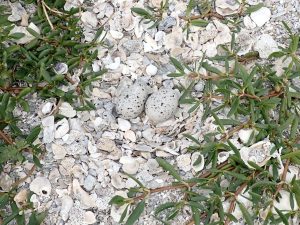 L9 & unbanded had some very nice looking scrapes but no eggs so far. 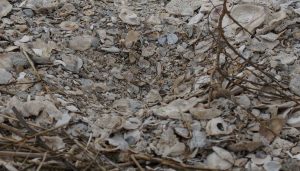 We kept checking back to see who was trying to approach the nest under the box and it became pretty clear it was 12’s unbanded mate because the unbanded pair was standing off a bit. She wouldn’t go in though (also too smart to get trapped!) so we went back and removed the box and left them to their incubating. We should have chicks in late February!

The other pair there is HM & X7 and they were both out feeding on a nearby reef so I figured they hadn’t laid a nest yet. Their area on the island is too eroded to be a safe nesting spot so they now nest on a rock wall that juts out from Galveston Island. Last year they safely fledged two chicks from this spot even though it could easily get predated by a mammal since its connected to the mainland. We only watch them from afar and don’t get out on the rock wall so we don’t leave any kind of scent trail to the nest. Better safe than sorry.

We continued on our way checking on all the other pairs. There were no oystercatchers on Jigsaw Island but we found JX & YK along the Galveston Island shoreline where 16 used to nest. 16 & unbanded were farther down the shoreline closer to 8 Mile Road on a small rocky peninsula that sticks out into the bay. I don’t know where they will nest this year. They tried South Deer Island last year and that didn’t go well. We’ll just have to see where they end up. On South Deer we found only Y7 & unbanded and A5A & unbanded. Both pairs were out feeding on reefs. There weren’t any birds on the Sportsman Road docks or on the Gangs Bayou breakwater so we headed across the bay. We found six Brown Boobies total spread out on three of the channel markers. The middle channel marker had two adults and no other birds. A pair perhaps? Wouldn’t it be thrilling if they nested somewhere!

We found F9A & unbanded feeding on a reef near Greens Cut and so we headed back up the GIWW to North Deer and Marker 52. YM & JH were also feeding on a reef and we found JC with an unbanded bird on a reef. What happened to W5? I guess he took off. Poor JC has had a lot of different mates over the years. The water was high enough to get back into the shallow spots where C1A & unbanded and E6A & unbanded nest but both those pairs were also out feeding on reefs.

Next up was J6 & UF and I thought for sure they’d have a nest but they weren’t even on their island when we arrived. They had a nice scrape though and they must have been watching from somewhere because they flew in calling and cursing us out when we checked things out. Better get on it UF. You island is oh so low and you won’t make it through a March high tide.

We motored down to the cut though to Jones Bay and found FR’s unbanded mate feeding along the island edge but FR was up on the island. 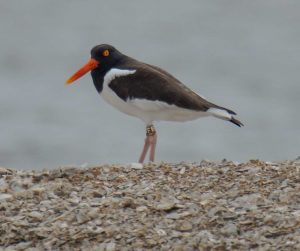 Hum. Something about this situation set off my nest radar so I went up to take a look. One egg nest! You go FRed! I am looking forward to FR’s antics. He is always fun. 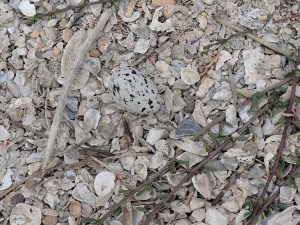 We found CA & Y2 on a small reef near their island so it didn’t seem like anything was going on there. There weren’t any other pairs in Jones Bay so we headed back to the boat ramp. We’ll go out again in two weeks to check on everybody again. It has begun!